The original NieR Replicant, which was released in 2010, is the Japanese PlayStation 3 counterpart to NieR Gestalt, which was released on the Xbox 360 in Japan and on multiple platforms internationally. NieR Replicant is the story of a young man named Nier who sets out to find a cure for his sister Yonah, who has been inflicted with a terminal disease known as the Black Scrawl. NieR Gestalt, which is simply known as NieR in North America and Europe, is mostly that same story aside from the fact that Nier is an adult man trying to cure his daughter Yonah.

This change, Square Enix later revealed, was because they believed younger Nier would appeal more to the Japanese audience while older Nier would appeal more to Western audiences. While NieR was praised for its music, characters, and intriguing story, one of its greatest criticisms was its gameplay. Nonetheless, it became a cult classic and beloved enough to get an unexpected sequel, NieR: Automata, in 2017. The sequel became a huge hit, selling over four million units as of June 2020 and sparking interest in a remake of the original game. 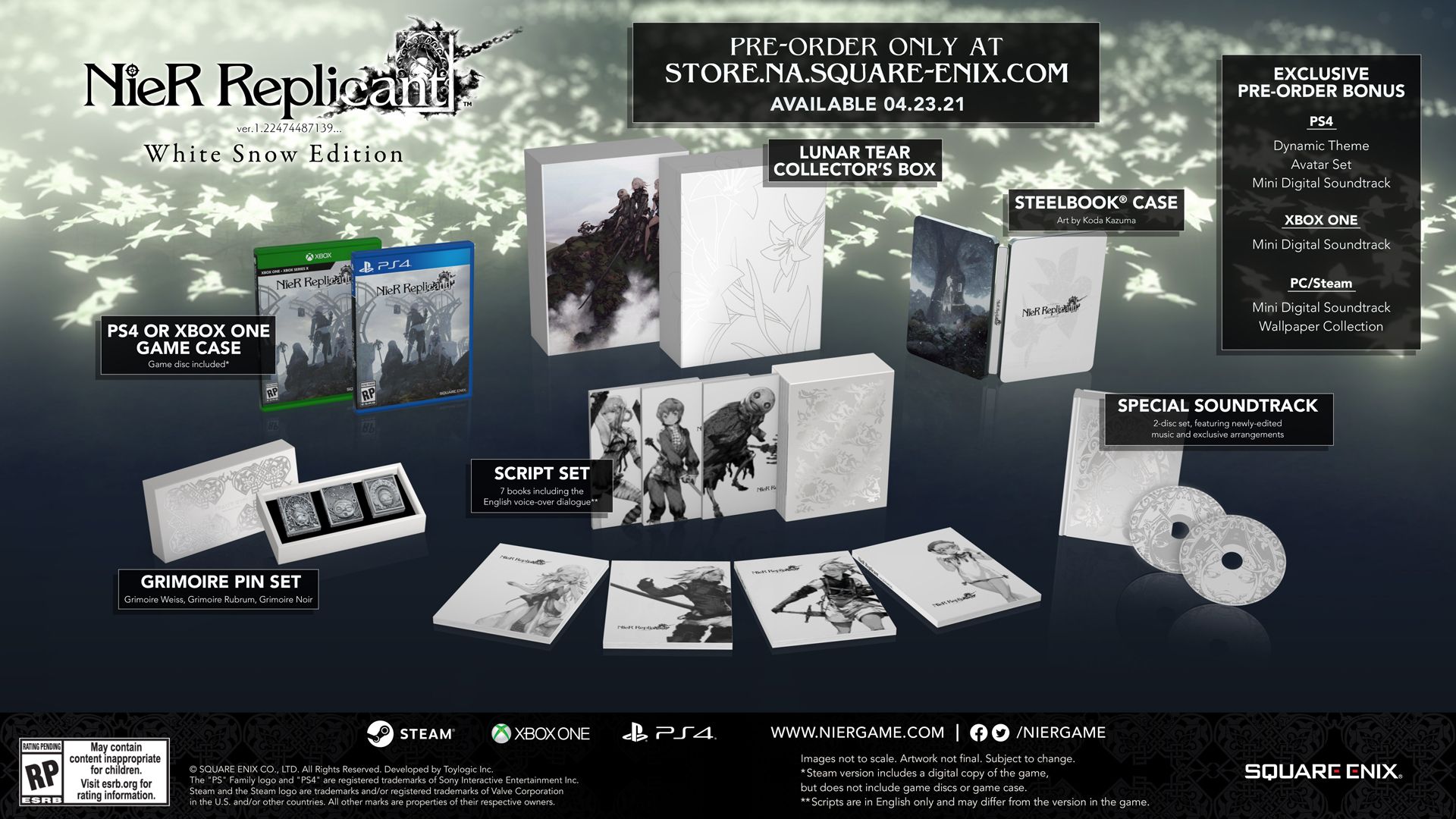 During the stream, the NieR Replicant ver. 1.22474487139 White Snow Edition was also announced. The special edition of the game, which is a Square Enix Store exclusive that costs $159.99, contains:

In regards to NieR: Automata fans who never played the first game, NieR series director Yoko Taro says in a PlayStation Blog that he would like for them to think of this as “a brand-new title that is totally unrelated.”

“During the production of Automata, I was thinking ‘I have to get both new audiences and Replicant fans to enjoy this title,’ and wracked my brains for interesting twists in the designs. But, Replicant never really had Automata players in mind when it was designed. Because of that, it might feel like there are less twists in the gameplay and story, compared to Automata. So… if you could just please think of this as a brand-new title that is totally unrelated! In any case, just forget about everything in the past! That’s it from me!!”

We’ll keep you updated with details about the game, so stay tuned!#NieRReinEN #NieR pic.twitter.com/IOxBVW7dIQ

While NieR Replicant ver. 1.22474487139 was the main attraction, the developers also touched on the upcoming gacha game of the series, NieR: Re[in]carnation. It is being produced by Square Enix and developed by Applibot. The official site has revealed it will be released on iOS and Android devices, and it was confirmed during this stream that it will be coming to the west.

To celebrate the opening of our official account, we will be giving away a PC/smartphone wallpaper of the official social media header image!

You can watch the full Tokyo Game Show presentation, which truly is worth watching since everyone involved is pretty hilarious, below.

Nier Replicant Ending E Guide – How to Get the New Ending

Nier Replicant Ending E Guide – How to Get the New Ending