It's hard to keep up with all these dates. We've got you.

Everything happens so much — it’s something we can certainly say for this year among all years. As the gaming industry, like many others, shifts to working from home, so have its annual events. Instead of E3 2020, we’ll be getting basically a whole summer’s worth of gaming events.

But we know it’s hard to keep up with what’s happening in the world, let alone all the different dates for these events. While some of us will know when an event is happening due to the flurry of takes on our Twitter timelines, not everyone will. And, either way, it’s best to have a heads up on what’s happening when!

Here’s a list of all the confirmed gaming events for the next few months, with any links you’ll need for more details. We’ve organized them in chronological order for everyone’s ease, and we will keep the list updated with the latest information. If you need help with converting timezones, feel free to use this handy converter.

Join Wholesome Games for the very first Wholesome Direct. The show will be live on YouTube and will bring new exclusive footage, developer interviews, and announcements from over 50 wholesome indie games.

PlayStation will be doing its next State of Play show, which will be dedicated to The Last of Us: Part II. It will reportedly run for approximately 20 minutes. According to the expo’s site, the event will be held in Japan and, “streamed to all of our friends throughout the world who love indie games. Our program will feature information on not only Japanese indie games, but indie titles from a wide variety of other countries as well. Our goal is to create a livestream for the purpose of facilitating new experiences, friendships, and discoveries for people around the globe.” You can watch it here.

IGN announced its new Summer of Gaming event, “a global, digital event set to begin this June to bring you the latest news and impressions around upcoming games and the next generation of console hardware.” Ubisoft, Blizzard Entertainment, Square Enix, and many more have been confirmed to take part. The event will include live broadcasts and programming featuring IGN’s editorial coverage. You’ll see, “publisher presentations with IGN pre- and post-discussions, remote developer interviews, hands-on demos, and preview impressions, gameplay, and news segments recapping the biggest announcements” and more.

For the full schedule, you can click here. For a full list of exhibitors, you can check here.

Originally set for June 4, the PlayStation 5 reveal event has been delayed due to the protests happening throughout the country. No replacement date or time were given in their tweet.

The publisher confirms that players will see titles from studios who are “both larger and smaller, those newer and those more established, all have been hard at work developing games that will showcase the potential of the hardware.” There was no word on if the system’s release date would be unveiled. You can watch the full event here.

The Escapist is running a two-hour showcase focused on indie games in partnership with GOG.com. For more information, you can click here.

Guerrilla Collective is a brand new three-days-long games festival that will, “reveal fresh announcements, trailers and reveals from some of the hottest publishers and developers around the world.” It will be hosted by Kinda Funny Games’ Greg Miller and produced by Media Indie Exchange (The MIX) with the Kinda Funny Games Showcase. Larian Studios, the developer of Baldur’s Gate III, has been confirmed for the showcase, so you can expect news on that much-anticipated title, among other things. It was originally planned for the weekend of June 6; however, it has been postponed due to the recent events.

Normally taking place at E3, this year’s PC Gaming Show will share “new games, never-before-seen gameplay footage, and announcements from some of PC gaming’s biggest and most interesting developers.” It was originally going to be broadcasted alongside other presentations as part of a larger day of programming on Twitch and other platforms on June 6, but following the recent events and the importance of uplifting the Black Lives Matter movement, it has been moved to June 13. The show’s goal is to, “provide a platform that celebrates PC gaming in general.”

GamesRadar will be conducting the Future Games Show, “a digital showcase of the most exciting games of 2020 and beyond as we prepare for the launch of next-generation consoles PS5 and Xbox Series X later this year.” The hour-long broadcast containing exclusive trailers, announcements, and deep dives is part of The Guerrilla Collective. You can watch it here.

The Steam Game Festival (summer edition) will be a multi-day experience that spotlights games set to be released within the next year. You’ll get information on plenty of new releases, try them out with time-limited playable demos or “short experiences,” connect with the developers behind the games, and add the games that pique your interest to your wishlist. Obsidian Entertainment’s Grounded is confirmed to be participating.

As we’ve previously reported, Electronic Arts’ yearly EA Play event is going fully digital this year. It was originally slated for June 11; however, it has been pushed back to June 18 as a result of the important conversations and events surrounding the Black Lives Matter movement. EA states on the event’s website that it will be, “about connecting players around the world and bringing them closer to the game franchises they love. During this year’s digital event, we’ll showcase our games through a live broadcast, community content, and more.” Several of us at Fanbyte are seriously hoping we’ll get a look at the next Dragon Age game, but we’ll be careful about setting our expectations.

The first “Day of the Devs” for the Summer Game Fest will be on June 22. This showcase is a collaboration between Double Fine and iam8bit, and part of The Game Awards host Geoff Keighley’s season of video game news. Among the participating companies for the showcases are Annapurna Interactive, Skybound Games, and thatgamecompany.

We’ve reported on The New Game+ Expo here at Fanbyte, and you can check that article out for a list of the companies that will make an appearance at this showcase, as well as some speculation on what we might see.

New trailers, co-op gameplay, and story missions of Marvel’s Avengers will be shown off on this stream. More information to come.

Cyberpunk 2077, which is currently slated for a  Sept. 17 release, will get its own event on June 25. It was originally scheduled for June 11, but the important discussions about and solidarity for Black Lives Matter have been stated to be taking precedence. E3 2020 would have been the game’s final appearance at the show before its release, so it’s safe to assume developer CD Projekt Red will show off new footage, features, and announcements.

For those wanting to learn about future titles coming out of Japan, BitSummit Gaiden will be hosting its first digital showcase. The event will showcase more than 75 games from independent studios from Japan and around the world on their new Discord server and Twitch channel. Players will be able to join different channels in their Discord to find specific genres of games and vote for their favorites. There will also be guest speakers, but the details on who is appearing were not revealed.

We also know that partners “including Nintendo, NISSIN FOODS, Sony Interactive Entertainment, Cygames, INTI CREATES, and Microsoft ID@Xbox will showcase indie titles” at the show. Cygames is perhaps best known for Granblue Fantasy, while INTI CREATES is responsible for the Gunvolt series and Mighty No. 9. Expect a few “new announcements” while you’re at it. While not fully related to video games, anime distribution company Funimation is holding a virtual con this July. It will feature panels regarding “Attack on Titan, Listeners, and Toilet-bound Hanako-kun featuring English voice actors from each series,” as well as partnered content with Aniplex Online Fest (from the purveyors of Demon Slayer, Cells at Work, and The Promised Neverland). As for the games-related hook, there’s going to be a My Hero One’s Justice 2 tournament. It pits the anime’s voice actors against each other “as they recreate fight scenes” from the game. It’ll be hosted by noted video games liker Kenny Omega of All Elite Wrestling, to boot. And honestly… just who doesn’t like anime?

TennoCon, the annual physical conference dedicated to Warframe, is going digital this year. The full schedule has yet to be announced, but rest assured that it will be “an action-packed all-day stream.” You can get more information on and buy the digital pack through here. While the show has traditionally occurred in July, this year’s event got pushed back a bit due to the general state of the world.

A fully digital E3-style showcase with exclusive Ubisoft game news, reveals, and more. You can very likely expect to see more of Assassin’s Creed Valhalla and Watch Dogs: Legion, among other titles.

The second “Day of the Devs” for the Summer Game Fest will be on June 22. This showcase is a collaboration between Double Fine and iam8bit, and part of The Game Awards host Geoff Keighley’s season of video game news. Among the participating companies for the showcases are Annapurna Interactive, Skybound Games, and thatgamecompany. 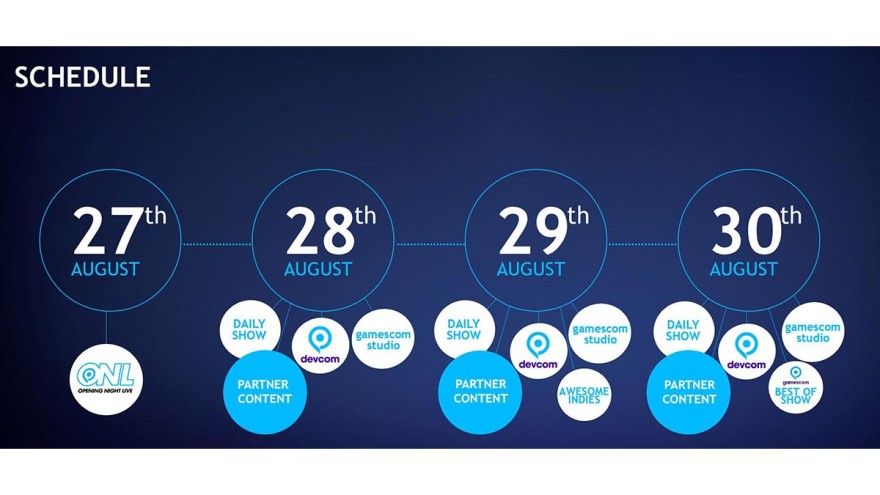 The much-anticipated annual event that normally takes place in Cologne is going to be a digital three-day event. It will mark the end of The Summer Game Fest.

“From Aug. 27 to 30, there will be lots of new shows, a greatly expanded gamescom now platform as a content hub for all the latest insights and news, and digital devcom’s wide-ranging program for game developers and other trade visitors as well as so much more,” states the official press release. There will be the Awesome Indies, Daily Show, and Best of Show showcases. It will also be produced by Geoff Keighley.

Quick update: @gamescom Opening Night Live will now take place live on August 27 and kick off 3 days of @gamescom 2020. We’re planning a spectacular show that will also be the grand finale of @summergamefest More at https://t.co/KRzKTQeHcs pic.twitter.com/3gVEvG1so7

Coming in just under the wire for “summer” events is RTX at Home. The Rooster Teeth expo is obviously more focused on animation and podcasts than straight-up video games, but it’s impossible to deny the company’s ties to gaming in general. That includes a Red vs. Blue: Zero panel on this year’s stream. You can keep up-to-date with the event and its schedule at its official website.

Other currently unconfirmed events as future Inside Xbox presentations and Twitch’s Summer Game Fest, will be added to this list as information comes.