The latest Tides of Vengeance Content Update for World of Warcraft: Battle for Azeroth, 8.1.5, is now live. And it’s packed full of new content for players to explore! Following the explosive Battle of Dazar’alor, the Kul Tiran Humans and Zandalari Trolls are now fully invested in the battle for Azeroth. As such, the allied races are now available for players to unlock and use.

Although not considered a “major patch,” with a lot of new story and several new activities for collectors, raiders, and PvP players alike, there’s no shortage of things to look forward to in Patch 8.1.5. So let’s take a look at what’s new in Battle for Azeroth!

Following the Battle of Dazar’alor, the Kul Tiran Humans have rejoined the Alliance — adding beefy sailors, shamans, and druids to their ranks. Likewise, the death of King Rastakhan has inadvertently removed the last obstacle keeping the Zandalari Trolls from joining the Horde. Now the faction’s proud paladins are all too eager to avenge their king. Check the links to find out more about the story, classes, customizations, racial abilities, dances, jokes, flirts, and brand new unique druid forms for each race!

These long-anticipated allied races are now available to all players. Well, that’s assuming you already did the legwork. You still need to progress through your faction’s main storyline in Battle for Azeroth, complete the war campaign in Tides of Vengeance, and reach exalted rank with their respective factions; check your progress with Wowhead’s Attunement Tracker.

Once those requirements are met, a short quest line cementing your loyalty to the Alliance or Horde will unlock. Play it to get a themed mount which all characters can use. Like other Allied Races, these start at level 20 and leveling up to 110 will unlock a special armor appearance (one that’s unique to that race). 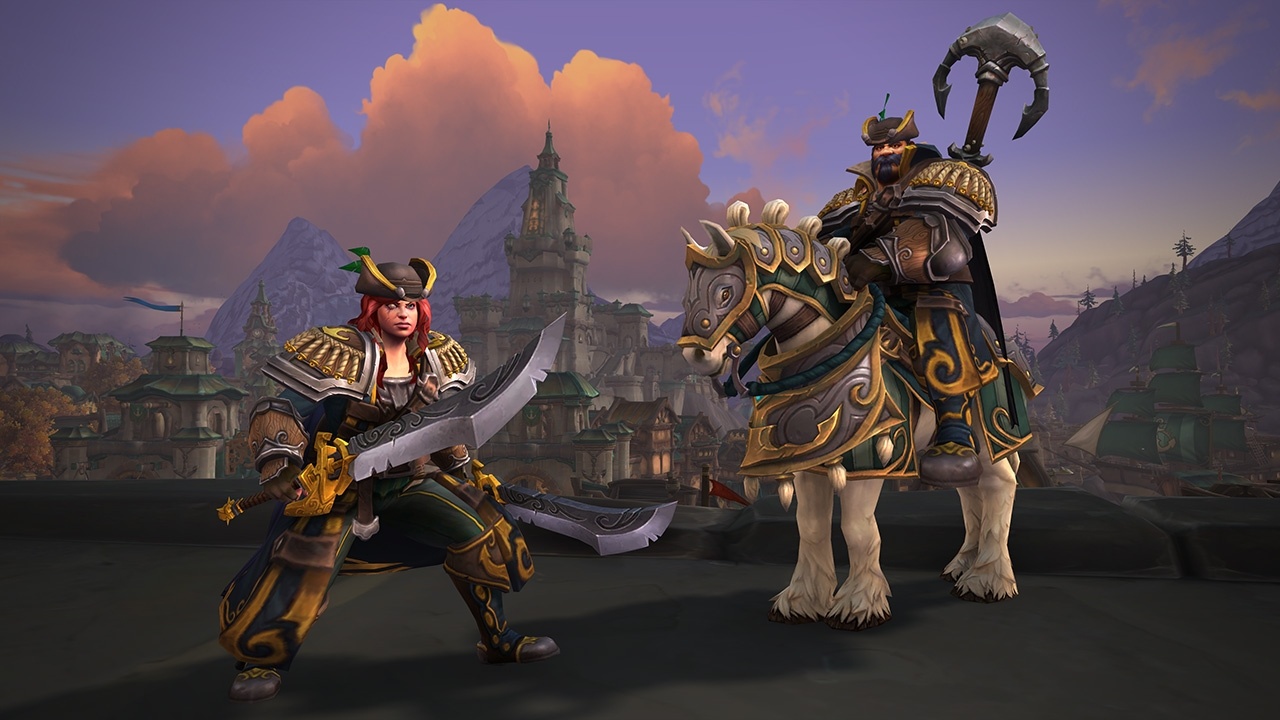 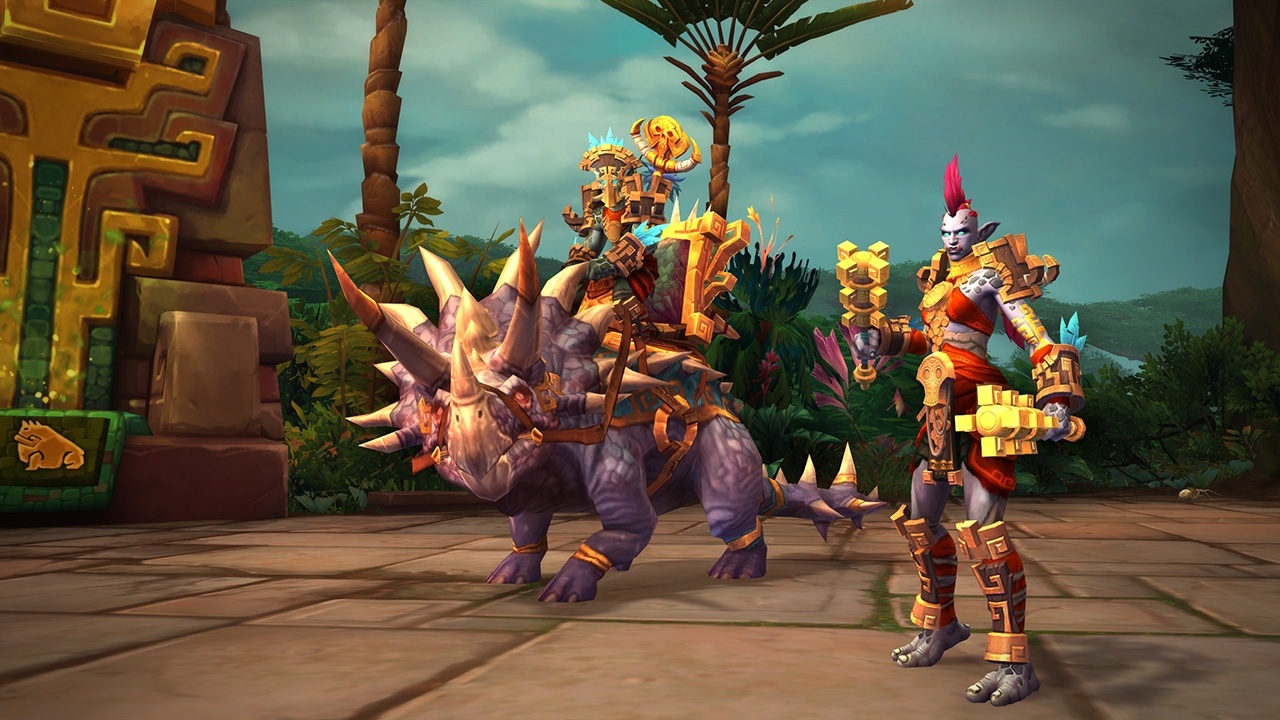 Don’t forget, you can use Wowhead’s Model Viewer to preview these new races, customize, and even build your own transmog setup before you even unlock them first!

The Campaign Marches On

Neither side claimed a full victory in Dazar’alor. Although the city vaults were pillaged and its great king slain, the Alliance lost one of its principal leaders. Even its fleet was driven away, too. The faction war campaigns continue in patch 8.1.5, in stark contrast to one another as long lost allies reunite within the Alliance and the Horde grows further apart.

If you need a refresher on important characters in the War Campaign, Wowhead has biographies for Jaina Proudmoore, Sylvanas Windrunner, Baine Bloodhoof, and Nathanos Blightcaller.

Speaking of the war campaign, you duplicitous double agents that have been playing both sides in Battle for Azeroth can now unlock two more mounts in patch 8.1.5. The Horde have stolen a horse from Arathi Basin, and in true Horde fashion they’ve slapped their symbol and a bunch of spikes on it. Meanwhile, the Alliance in Alterac Valley somehow managed to capture and tame the most regal looking wolf you’ll ever see (I’m naming mine Lo’Gosh and you can’t stop me!). Make your friends jealous and confuse your enemies with these new mounts upon completing both factions war campaign.

Players looking to engage in more direct combat with one another also have something to look forward to. Wintergrasp has returned as an Epic 40 vs. 40 Battleground. Arathi Basin and Warsong Gulch have also been remastered with all new visuals. Perhaps to commemorate this update, the very first Player vs. A.I. brawl will take place in Arathi Basin. Better get ready!

‘Tis the season for War and Holidays

Warlords of Draenor Timewalking has been added to the calendar, starting sometime in May of 2019. During the event, players will be able to travel back to six dungeons from the expansion — earning Timewarped Badges to spend on new mounts, toys, and commendations. These, in turn, award reputation for most of the Warlords factions. As if one armored wolf per patch wasn’t enough! Now you can also enjoy these snazzy boys shown below.

Three new micro holidays are being added to the World of Warcraft calendar: celebrating free T-shirts, Luminous Luminaries, and the Wanderer’s Festival. At the same time, several existing events have received minor updates adding new children to help, seasonal toys, pets, armor ensembles, and the biggest roller coaster in Azeroth. Stay tuned for more on those in the future! 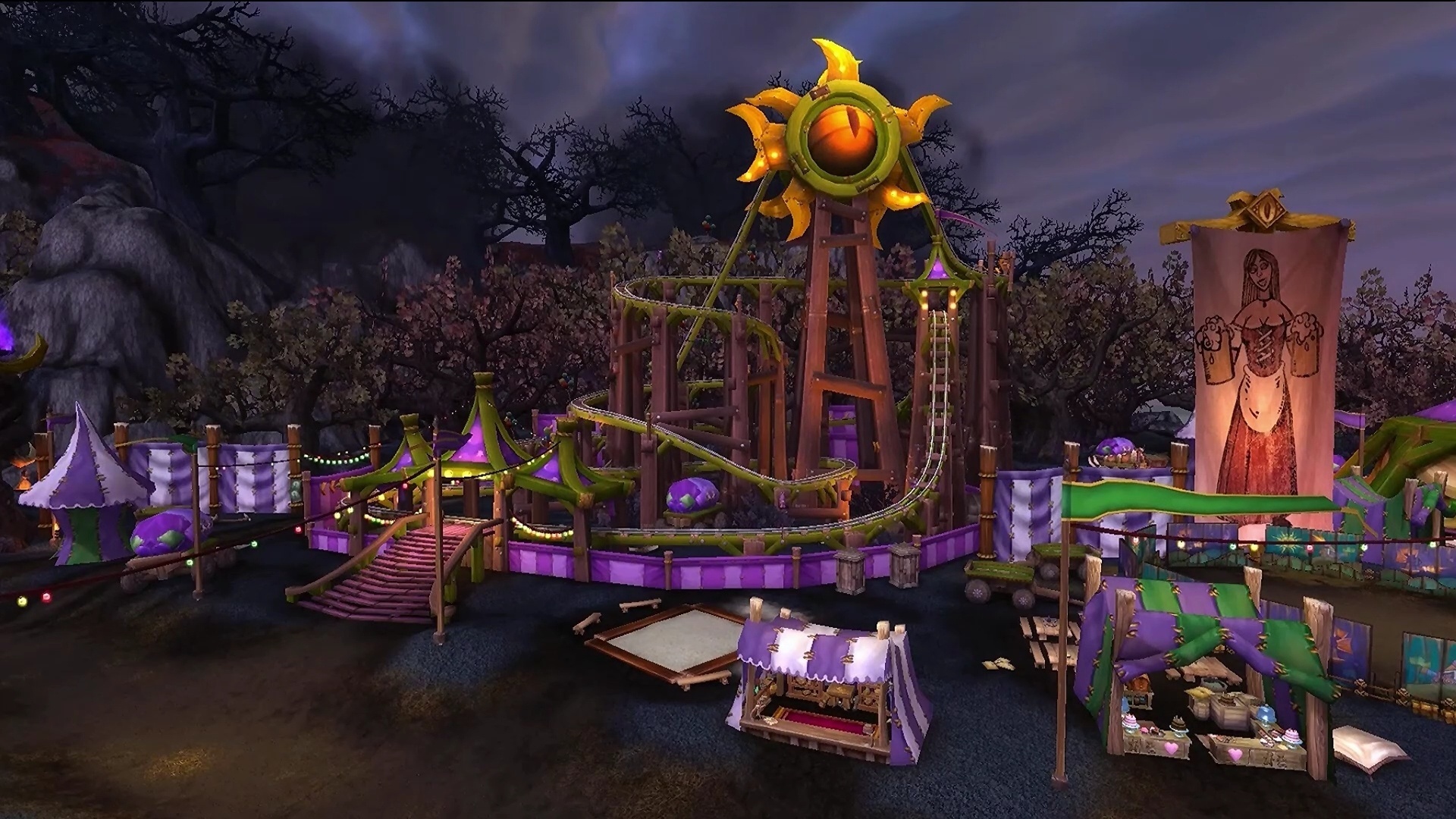 Finally, the Brawler’s Guild has finished cleaning up the mess we made in Legion (at last). And now they have a whole host of new challenges, mysteries, and rewards for those strong enough to take them. You can find your invitation on members of the opposing faction. Or perhaps you want to try your luck buying them from A. Shady dealer in Stormwind or Orgrimmar.

It’s not all fun and games though; the Naga, heralds of Azshara, have risen from the sea to invade the lands of Azeroth once again. Magni Bronzebeard will once again call on players to aid Azeroth, but he isn’t the only person calling this time. Shadow Priests will reunite with an old friend, while other players will make a dangerous ally in Xal’atath, the sentient artifact from Legion which holds the secret to an ancient eldritch horror sleeping beneath the waves…

This will lead players to the Crucible of Storms: a two boss raid coming in April. The mission bridges the gap between Tides of Vengeance and the 8.2 patch, Rise of Azshara. Contained within the raid are several intriguing plot points which explore the nature of the Old Gods — and of course lots of loot for players to acquire! These new items will drop at higher item levels than Battle of Dazar’alor. They also come with unique void effects which can both help and hinder players and their allies.

Of course, if new raids aren’t your thing, you can head back to Pandaria to collect a whole new set of battle pets from Mogu’shan Vaults, Terrace of Endless Spring, and Heart of Fear.

Several other changes have also gone live in Patch. 8.1.5. These range from select Mythic Keystone Dungeon improvements, new portal rooms in each faction capital, all the way to a new pinnacle profession item for all of the crafters in Battle for Azeroth. Additionally, several classes have been updated with everything from bugfixes to major buffs and nerfs. Last but not least, Hunters can embark on a quest to recover a dear friend.

New story, world quests, an epic battleground, a mini raid, level 120 heirloom upgrades, 2 races, 8 mounts, 20 pets, six toys, and six ensembles: it’s all just waiting in patch 8.1.5… There’s simply too much for one article to cover! Find out more in Wowhead’s Patch 8.1.5 Survival Guide and get back to the Battle for Azeroth.

Fanwidth Episode 007: Did You Own a Gun?