Draft problems, tag team break ups, and at least one guitar to the back

WWE concluded a relatively uneventful draft on Monday night, somehow missing the “shake it up” element and managing to keep 97% of feuding superstars on the same brand. Gotta milk that well til it’s dry. Here’s a complete list of who’s playing for what team: 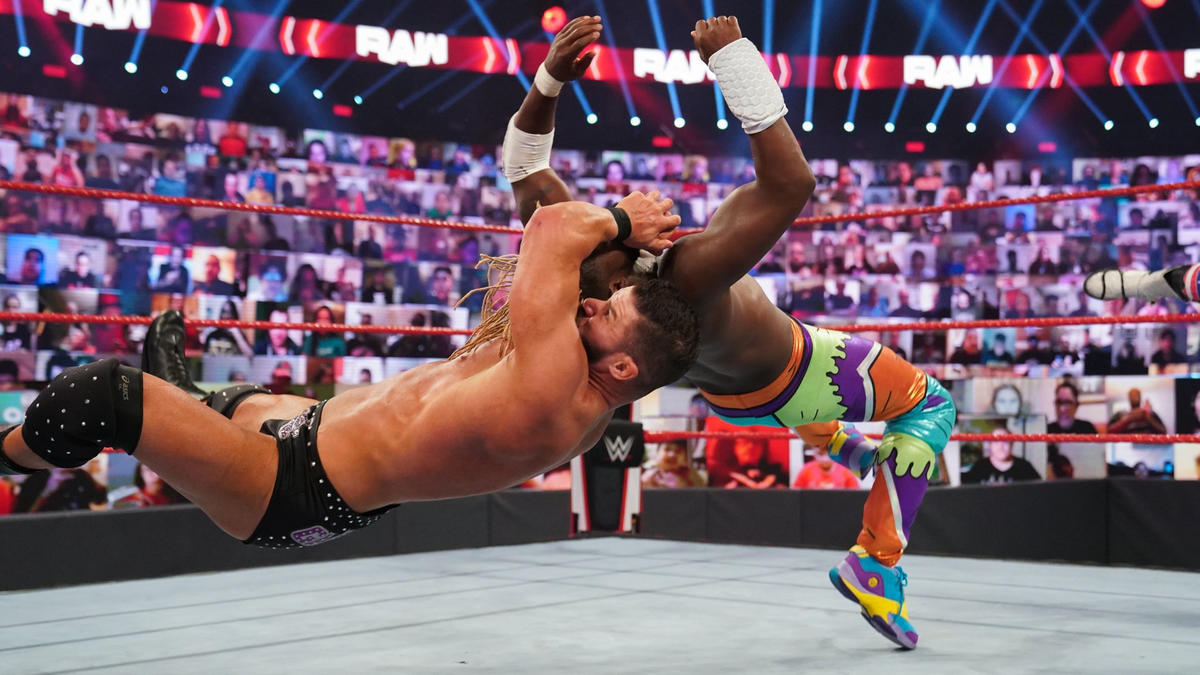 Like the least eventful swap meet you’ve ever seen, The New Day and The Street Profits met backstage to trade belts, since they’d each been drafted to the other brand. It was kind of dumb, but at least we got four tag team legends on screen at once. Roode and Ziggler then demanded a match against the new Raw champions, citing their victory over the Profits last week. I guess beating a completely different team earns you a chance at facing the new champs, because we got the match anyway. Don’t think about the draft too logically, because it’ll just give you a headache. This match was fine, which is about the best thing you can say for something involving Robert Roode in 2020. Roode and Ziggler started out with some big moves early, but couldn’t get the 3 count off a Famouser. Shocker. They double teamed Kofi for a minute, sneaking some cheap shots behind the ref’s back. Xavier got the tag and took down Ziggler. He avoided a Glorious DDT to tag Kofi back in, laying Roode out with Midnight Hour to retain their titles. Roode and Ziggler were later drafted to SmackDown, so this whole match was kind of pointless, as they also went on to face the Profits on Friday. I don’t need that much Roode and Ziggler on my tv, if I’m being honest. Not now. 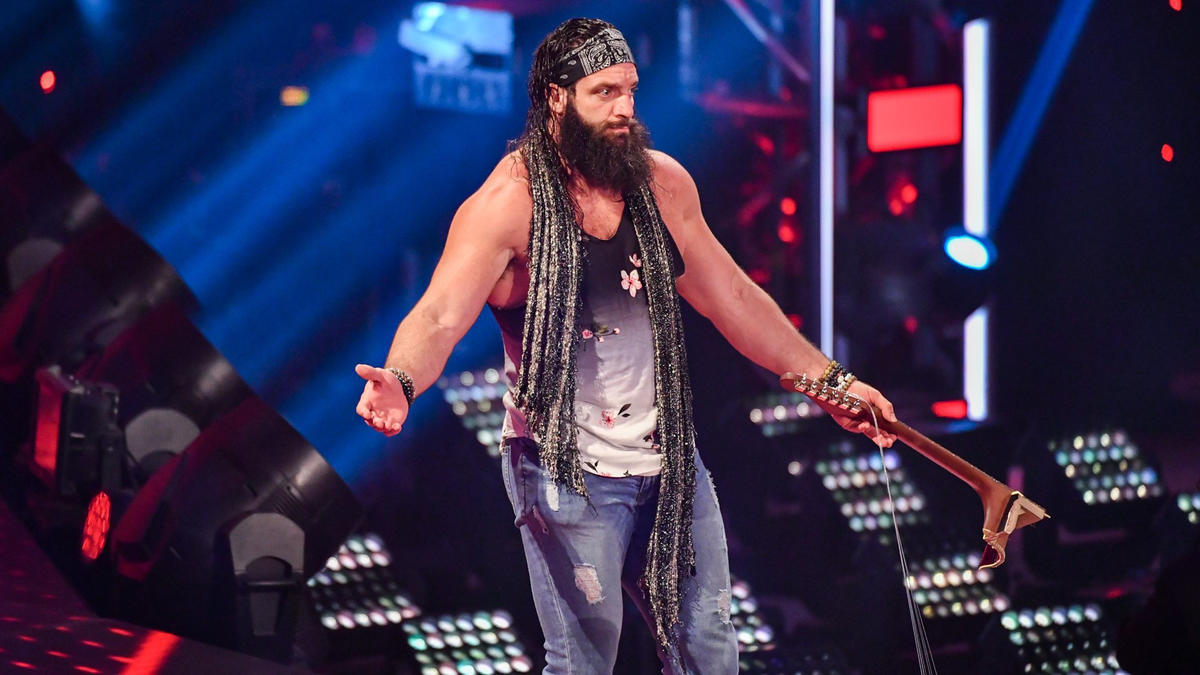 Seth Rollins was drafted to SmackDown on Friday, and he decided to leave Raw with a bang. He gave a self-congratulatory speech about his time as the so-called Raw leader , but was interrupted by Jeff Hardy, who’s now gonna be rolling in red face paint. Rollins insulted Jeff because he’s old or something, and then AJ Styles came out to join in on the Jeff roast too. The three went after each other, and we got a triple threat to settle who’s truly the #1 dad in this ring. We’ve just seen Hardy and Styles go at it for the past few months, but Rollins was a nice addition here. He and AJ teamed up briefly to take down Hardy, but that alliance did not last, as Styles went for a surprise roll up. He pinned Seth after a shot to the neck, but the messiah kicked out. Styles and Hardy went after each other, with AJ going for a Styles Clash, only to be interrupted by Rollins. Seth tried a Falcon Areow, but that literally never works. Suddenly, who should make a surprise return but frontman Elias! He hit Jeff square in the back with the guitar and left Styles to pin him. This was a fun change of pace from the Hardy/Styles matches we’ve seen recently, and I’m excited to see Elias back in guitar action. 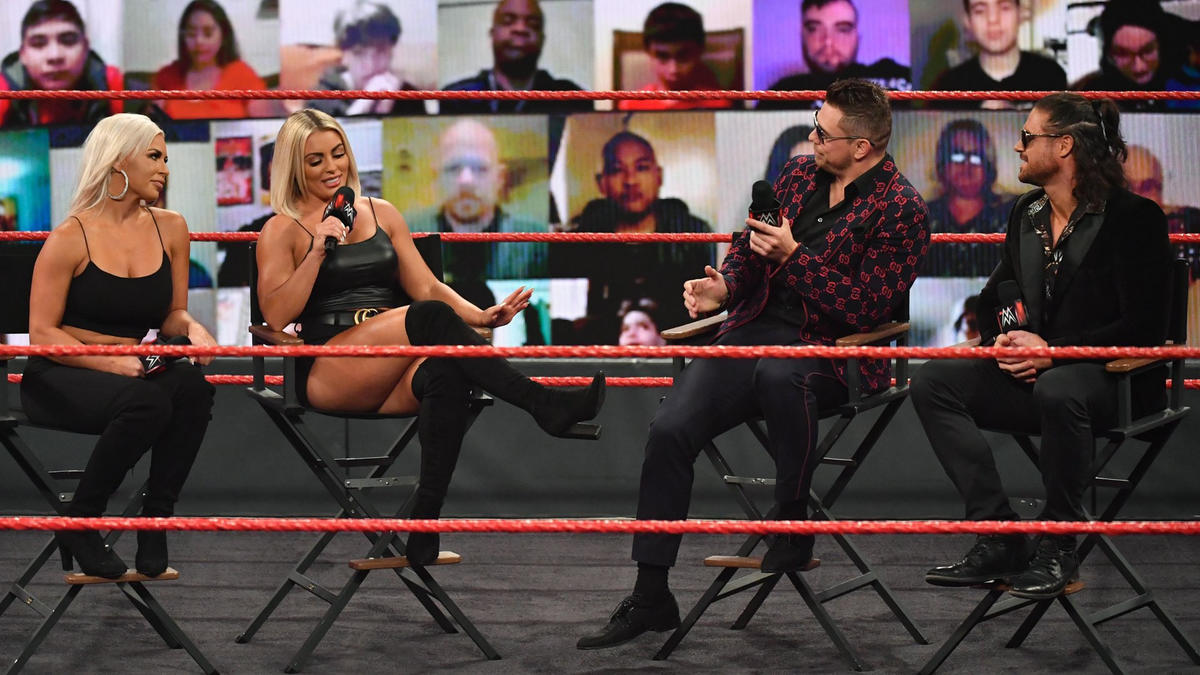 Miz TV, a segment that has somehow survived the past 5 years, hosted the developing team of Dana Brooke and Mandy Rose on Monday night. Miz and Morrison tried to tell the duo that friendship was about more than being blonde, but the women stuck by each other. This lead to Natalya and Lana coming out to defend their honor as the most random tag team in the women’s division, which lead to a very short tag match later in the night. I like Rose and Brooke together; it doesn’t make any kind of storyline sense, but the two have put on some good matches over the past few weeks. I unfortunately never got on board with Lana and Natalya, who didn’t seem to mesh as characters or in the ring. Lana and Natalya isolated Brooke early on, working Dana over in their corner. Lana took a breather to talk trash, allowing Dana to tag Mandy in. Rose hit a knee strike and set Brook up for a senton Bomb, giving the duo another win over Lana and Natalya. After the match, Natalya decided she’d had enough of the former Russian, and told her they were done. It’s not a surprise to see them break up; the team never got a real shot since forming over the summer. Rose and Brooke can easily step into their place, potentially feuding with Jax and Baszler sooner rather than later.

As for Lana, she was the (very) surprising winner of a mediocre women’s battle royal later in the night, which will send her to face Asuka for the Raw women’s title. So, that’ll be a match that we have to watch. 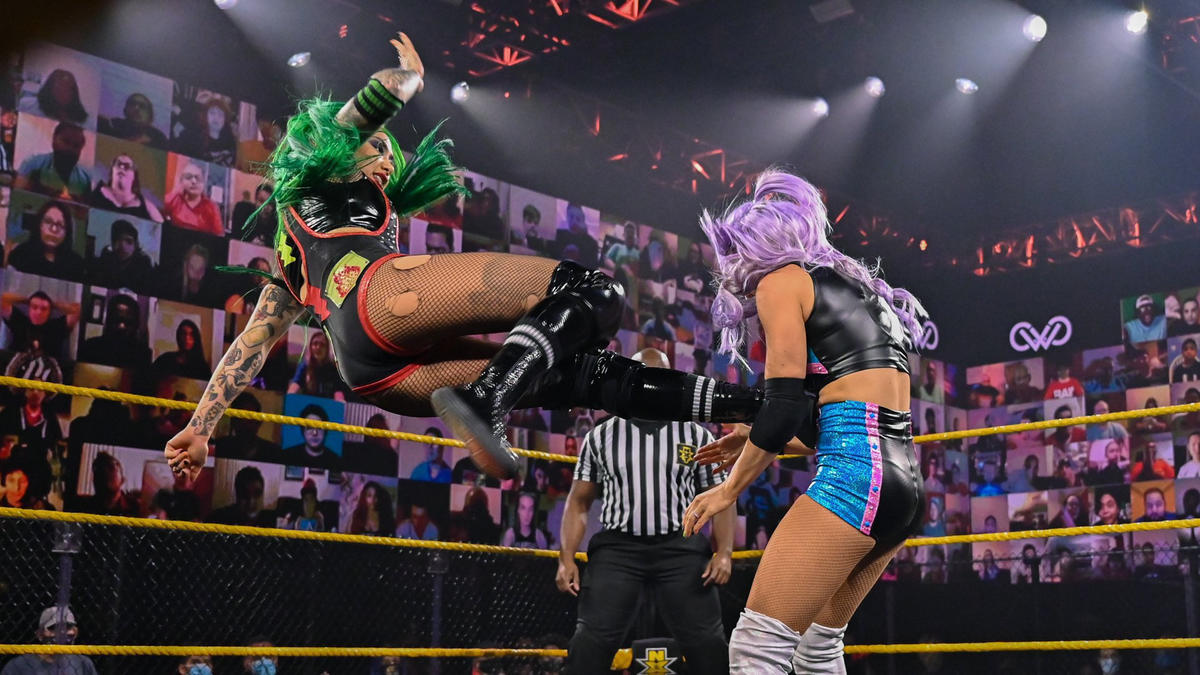 NXT is depending on nostalgia to make people care again, reviving Halloween Havoc and hopefully bringing out the giant pumpkin that used to sit on top of Party City. To determine Io Shirai’s challenger for the upcoming show, Shotzi Blackheart and Candice LeRae faced off in a very good match this week. I love both these wrestlers and their Easter colored hair, so this was a fun time for me. Shotzi looked great, hitting some big moves early on, including a fireman’s carry where she dropped Candice face first on her knee, somehow only earning a two count. She got LeRae on the apron, but Candice tossed her into the post and hit a face buster on the edge of the ring. Shotzi came back with another pinning attempt and went for a dive onto the outside, but Candice got out of the way. She got some brief encouragement from Indi Hartwell in the form of brass knuckles, leading to a metallic right hand and another win for the Poison Pixie. I’m not super excited to see Shirai and LeRae face off again so soon, but it’s not like that match will be bad. With Hartwell seemingly on her side, at least we shouldn’t get anymore Gargano shenanigans. Meanwhile, Shotzi is going to host Halloween Havoc, probably because of everything about her general aesthetic, and she announced that both the women’s and men’s NXT title matches will be “Spin the Wheel, Make a Deal.” I personally think we need more 90s game show gimmicks out here, so I’m on board with this. 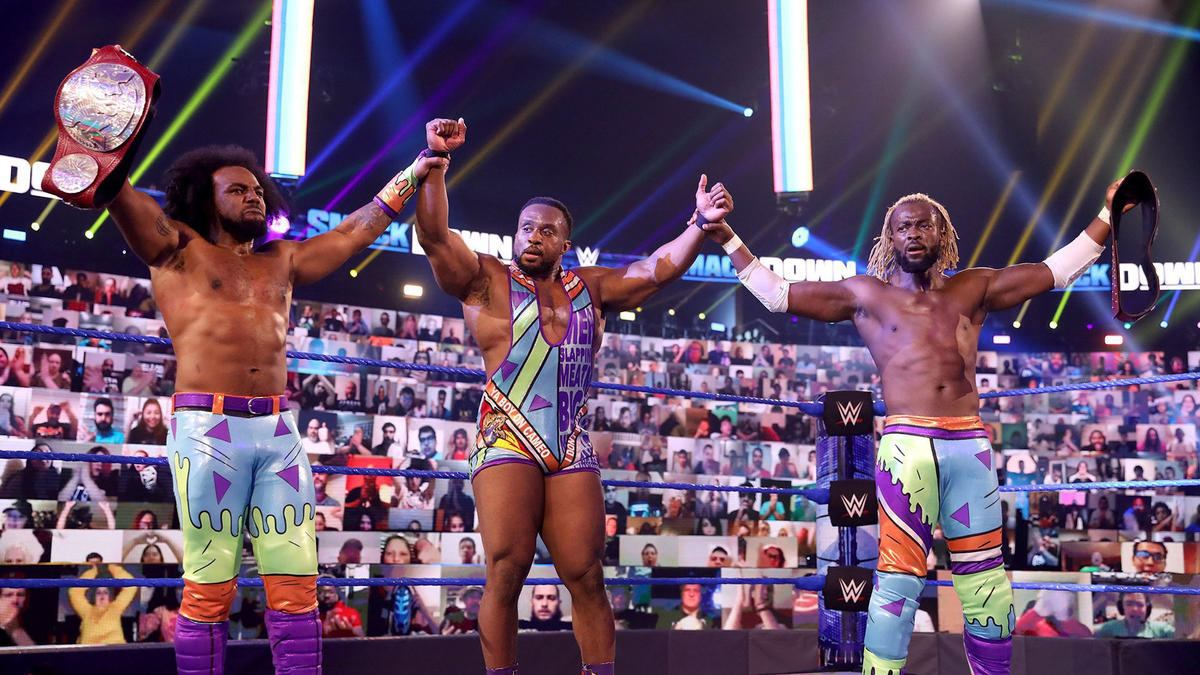 End of an Era

The sun has officially set on The New Day. The trio wrestled their last match as a team on SmackDown this week, with Wood and Kingston officially the Raw tag team champs. They cut an emotional promo, talking about the past 5 years as a team and making us all pretend like we weren’t holding back tears at 9 pm on a Friday. Their final match saw them taking on Sheamus, Cesaro and Nakamura in a good, if brief, bout. Kingston took out Shinsuke with a double stomp early on, but the heels came back when Cesaro managed to overpower Big E. Woods tagged in and The New Day hit a double team, but still Cesaro kicked out. He and Sheamus did some double teaming of their own, briefly giving hope to all remaining fans of The Bar (me). Big E hit a Big Ending, but Nakamura ran in to break it up. Kofi hit Sheamus with a headbutt, then sent him into the ring post. E and Woods landed the Midnight Hour to get the win and end The New Day’s journey on a high note. While the trip will be sorely missed as a unit, this is a great opportunity for Big E as a singles start and I’m very excited to see him shine. Over on Raw, Kingston and Woods will surely breathe life into a fading tag division. 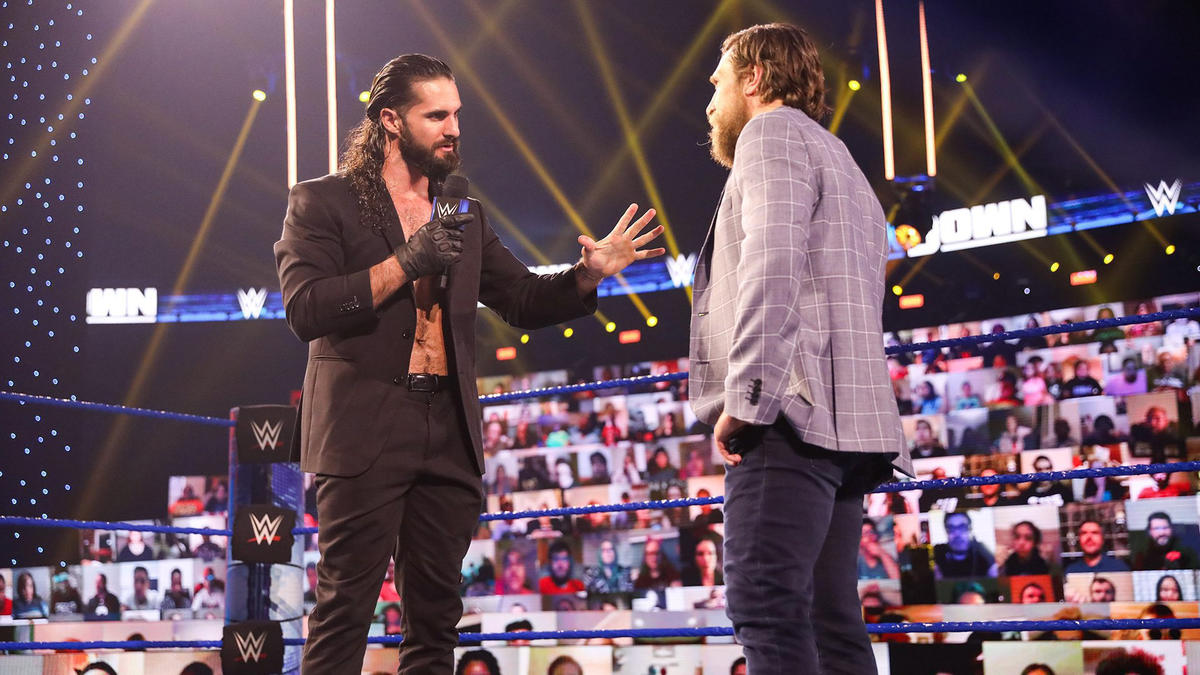 Brie and Birdie Bella were in virtual attendance at the ThunderDome, which is a literal insane sentence that I just typed in 2020. They watched as Daniel Bryan returned to SmackDown to say how excited he was to face the best talent in WWE (Bianca Belair). As usual, Seth Rollins showed up to get mad at someone else for being a dad. Rollins made fun of Bryan for staying home with his new baby, then asked why Bryan wasn’t personally naming him as the best draft pick. He swung at Bryan, who returned with a series of Yes kicks. Seth tried to escape the ring, but Rey and Dominik Mysterio came out to continue this feud that will literally never end as long as I live. Bryan ditched Seth to face the sins of his past alone, as Murphy came out to join the roast. He took out Seth and sent him running to the back, then tried to shake hands with the Mysterios, who still weren’t having it. Maybe don’t dm teenagers and more people will want to hang out with you, Bud. Bryan and Rollins would be great, but I guess we have to keep squeezing life out of Seth and the Mysterios. Murphy’s faceturn freshens it up a bit, but I can’t take much more of the same match up. 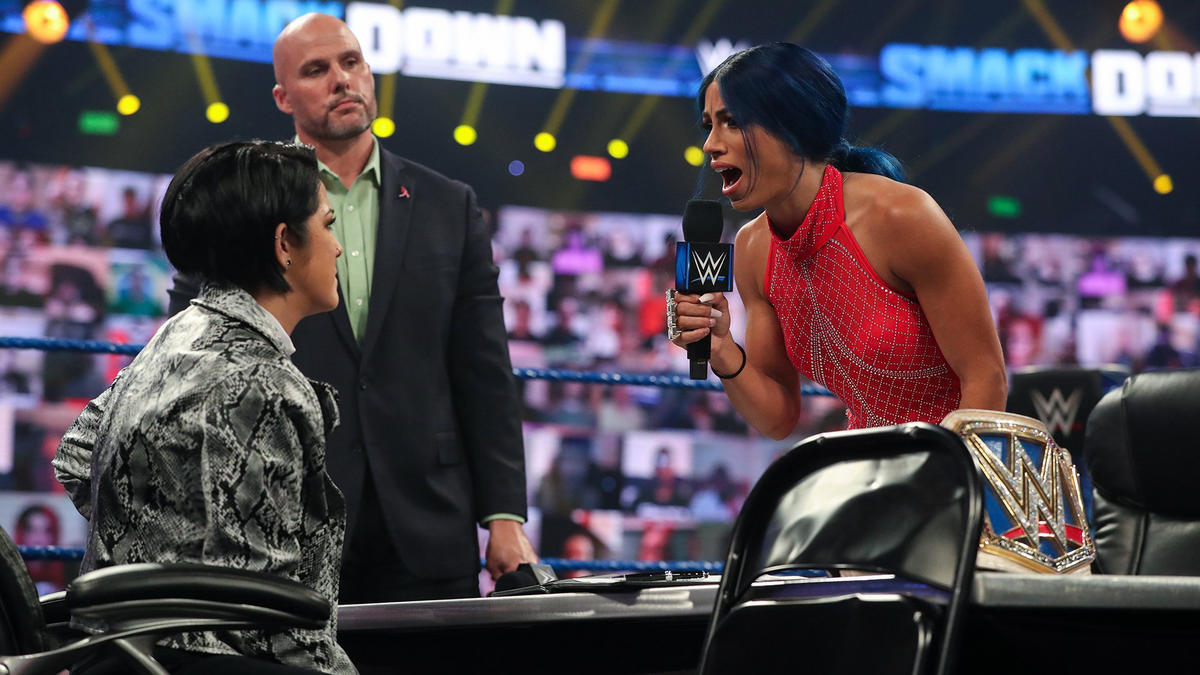 Sasha Banks and her incredible bedazzled jumpsuit arrived on SmackDown for a Hell in a Cell contract signing. Adam Pearce presided over the two former best friends, who had some serious words ahead of their match next week. Bayley claimed Sasha was simply mad that she had turned on Banks first. But, surprisingly, the Boss said she wouldn’t have betrayed Bayley the same. She reminded the champ of all the times she’d had her back, and insisted that if she’d wanted to turn on her, she could have done it years ago. Great promo work from both women here, who have plenty of history to play on. Bayley grabbed a chair and refused to sign the contract. A befuddled Pearce did little to remedy the situation, even though that was literally the only reason he was out there. Sasha stood y’all as Bayley slunk away, chair in hand. This is the match I can’t wait for at HiaC, and I have no doubt all of Sasha’s neck bones are going to deliver big time. 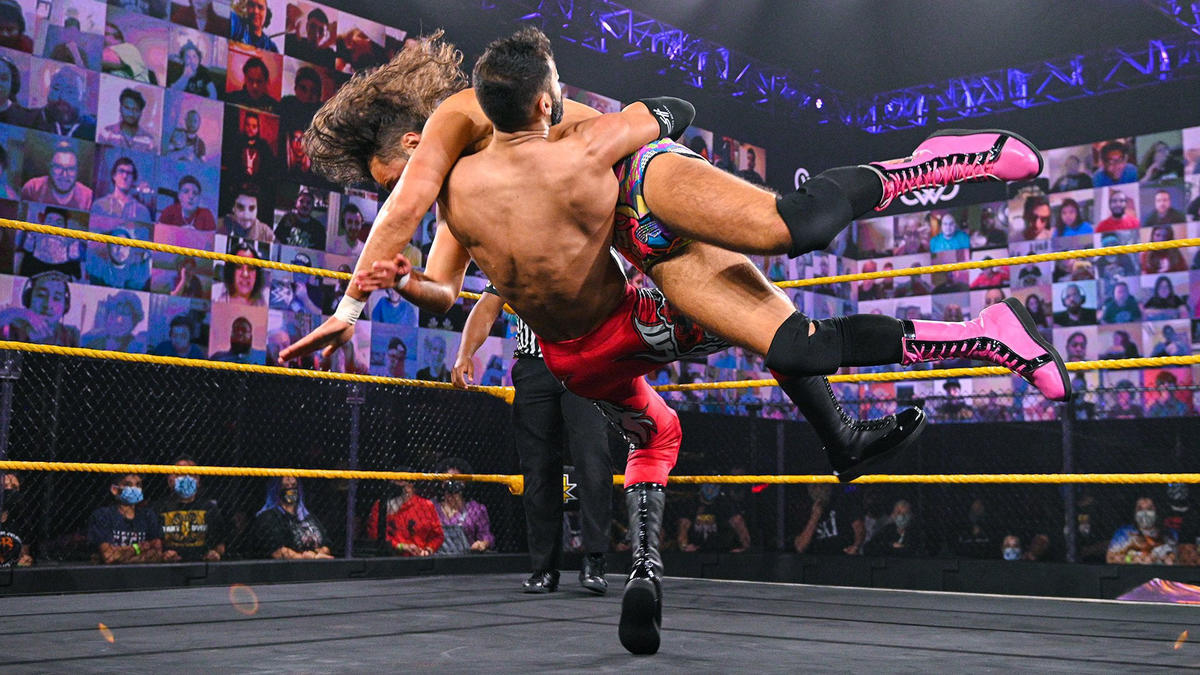 This week’s 205 Live saw the debut of two former Evolve stars- Anthony Greene and Curt Stallion. As a well documented fan of both the 80s and tearaway clothing, I’ve been following Retro AG for a while. Both challenged Arita Daivari in his Daivari Division- $10,000 dollars on the line to beat the 205 original. Unsurprisingly, neither man could get the job done, but they looked pretty good before getting their asses handed to them. Stallion technically won his match by DQ, as Tony Nese ran in to wipe out the kid with a big knee. I’ve been loving Daivari since his return; he plays the obnoxious rich kid so well, and he’s looked even more vicious in the ring. I wouldn’t be surprised to see him challenge Escobar soon, but that’s only if NXT remembers the belt can also show up on 205 sometimes.