WWE celebrated the holidays with the only way they know how; more gimmick matches than anyone has ever wanted to sit through, and enough fake trees to start a small fake forest fire. At least Big E had a good Christmas! That’s worth every 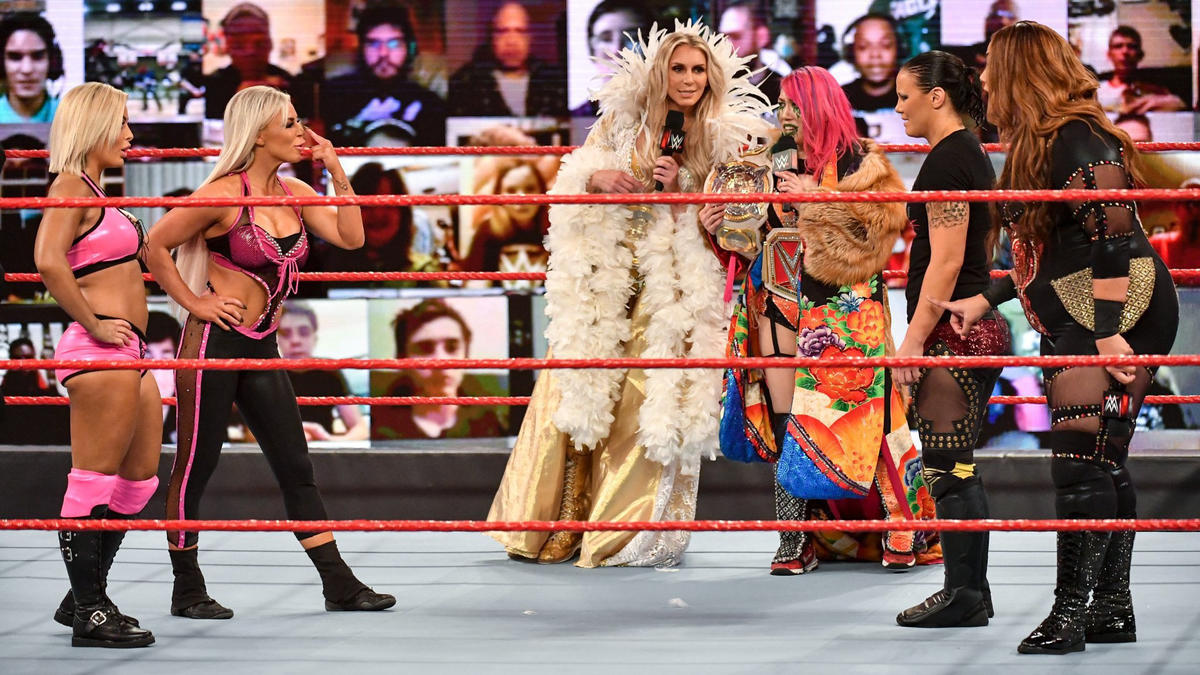 The Queen, The Empress, and Their Sexy Muscle Friends

Charlotte Flair kicked off Raw with a homecoming in a beautiful white robe, presumably cosplaying as baby Jesus. She invited Asuka out for a tag champ celebration; it’s admittedly very fun to see Asuka holding two belts, although I can’t say I have too much faith in them letting her actively defend either of them. Jax and Baszler were out to interrupt and teach some Christmas lessons. Shayna Baszler was about to teach us some seasons beatings, a term she coined herself, when Mandy Rose and Dana Brooke joined the party to call out the former champs. This lead to Rose and Brooke taking on Baszler and Jax, with Flair and Asuka on commentary. Asuka professed her support for Sexy Muscle Friends and told Flair very sincerely that she missed her, once again making The Empress the top commentator in the WWE. In the ring, Rose and Brooke dumped Baszler, but Jax was able to deliver a headbutt and toss Dana into the corner. Nia controlled for a while, wearing Dana down, until she chopped at the knee. Rose hit a knee to the neck and the faces took over as they knocked down both the former champs on the outside. Nia managed to run Mandy into the barricade, but Rose continued her quick strikes in the ring. Baszler tagged in and took control, going after Mandy’s leg. Shayna wiped out Dana on the apron, but a big suplex from Mandy sent Baszler reeling. Jax pulled Brooke out of a pin on Shayna, but Mandy wiped her out with a knee. Baszler caught Brooke and hit a backbreaker, then got her in the Kirifuda Clutch, forcing a tap. We’ll likely see Baszler and Jax challenge for the tag titles again soon, but the real anticipation remains for Baszler and Asuka one on one. 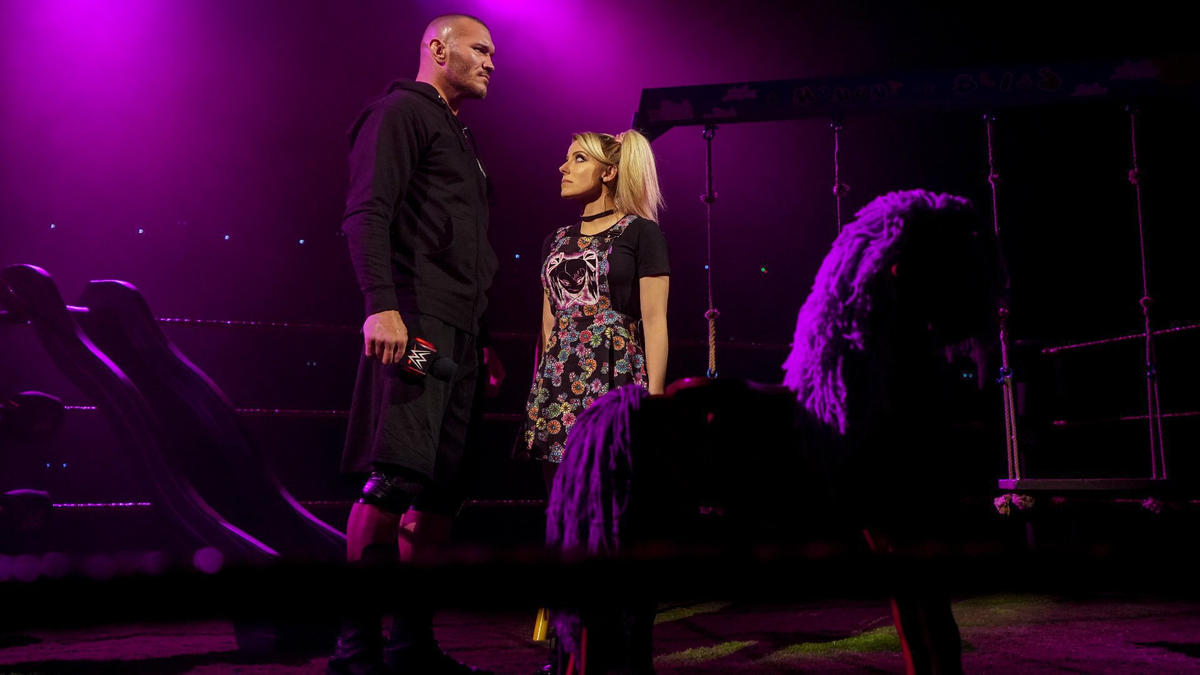 The Fiend Updates Away Message

After burning a man alive at TLC, Randy Orton came to Raw with some spraining to do. He came out Monday night to brag about his arsonist skills and how he could “still smell the burning flesh,” like he was auditioning for the Hannibal reboot. As he was talking about setting a beloved children’s show host on fire, the lights went off and Orton fled the ring; when they came back up, Alexa Bliss had assembled an entire play set in the squared circle. Randy wasn’t impressed with her quick craftsmanship, so she told him she knew where The Fiend was hanging out. My vote would be the fiery inferno we will all one day face as professional wrestling fans, but Alexa seemed to be thinking of something more along the lines of Miami Beach. She said The Fiend had “gone home,” but if he ever came back to WWE, maybe he’d build her a slide or something. While Randy murdering a man on live television was shocking, this segment was just hitting the reset button. I’m sure we’ll see The Fiend come back from hell just in time to hit #21 in the rumble. 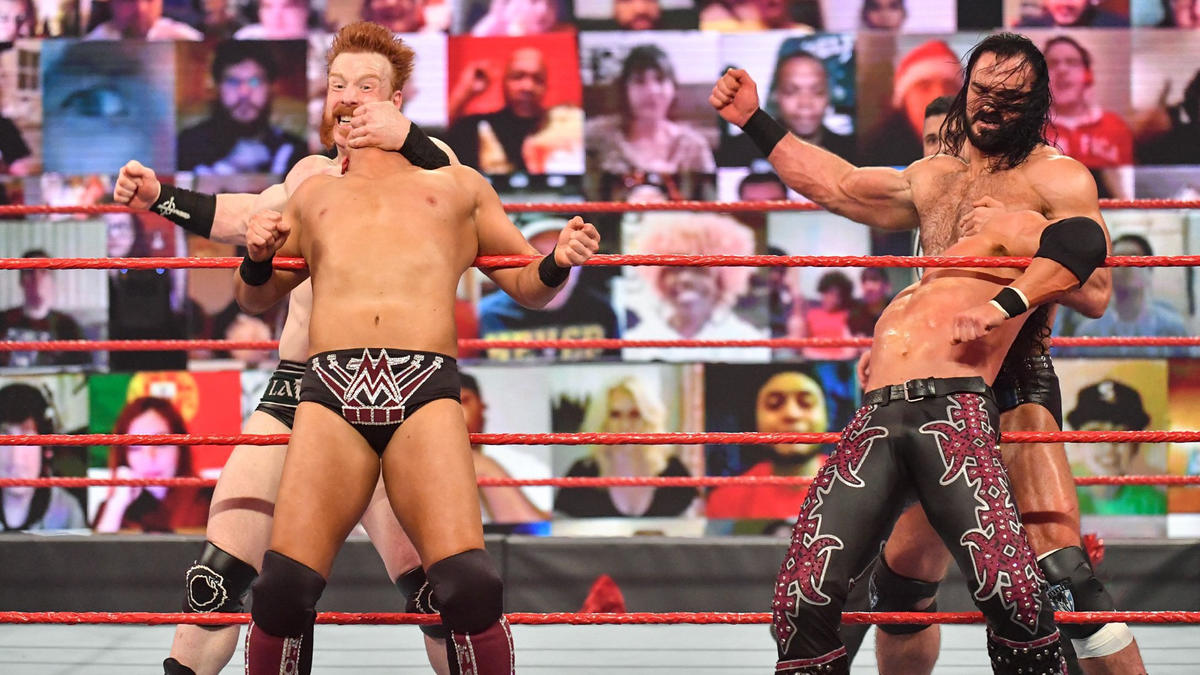 Friendly Kick in the Face

The Miz and John Morrison hosted AJ Styles on The Dirt Sheet, giving all three men a chance to talk about their phenomenal failings at TLC. Miz offered to make it up to AJ by giving him and Omos a role in the next Marine sequel- which, genuinely, I would love to see. Miz also claimed that since Morrison had cashed in on his behalf, he still technically held the briefcase. McIntyre came out to introduce his good buds Sheamus and Keith Lee and attempted to start their 6 man street fight early, but the heels cleared out before they could get into it. They saved the street fight for the main event instead, forcing us to wait all night to find out what AJ’s idea of “street clothes” is. Turns out it’s just his regular gear, which feels like a real missed opportunity. We started with Morrison and Miz going after Sheamus, until McIntyre tagged in. Morrison targeted his knee to keep the bigger man down, but Lee came in and tossed Morrison halfway to the moon. He and Sheamus worked together to take out all the heels, which was great development following a brief skirmish earlier when Lee accidentally hit Sheamus. Wrestlers never understand how accidents work. McIntyre threw Styles into a bowl of eggnog, which is fair, as it is the least appetizing of holiday treats. Sheamus tagged in, but Keith quickly followed, and both men wanted the glory. A Spirit Bomb from Lee put away Morrison, but Sheamus gave him a Brogue Kick to show who was the real boss. McIntyre lamented how he can’t get through a single Christmas without a fight and the show faded out.

Drake Maverick and Killian Dain have been taking small and tall to a whole new level on NXT these past few months. They faced tag team champs Danny Burch and Oney Lorcan in a Street Fight on Wednesday, and jumped the champions from behind to get an advantage early. Dain set up tables on the outside while Maverick brought in some chairs. Burch and Lorcan came back and went after Dain, double teaming him in the ring. They went back to tagging in and out as Dain took control, tossing Lorcan onto the set up chairs. Maverick tagged in but found himself overwhelmed by Oney. After working the smaller man over for a bit, Maverick finally made the hot tag and Dain cleared the heels. Burch and Lorcan attempted to put him through tables at ringside, but he literally bounced off them. That’s a lot of muscle, or very elastic jeans. Either one. With Dain down on the outside, Maverick made a valiant attempt to save the match, but was caught in a double team finisher to retain. This was a fun time; Maverick and Dain are still entertaining together, but they have a while to go before they’re competition for McAfee’s boys. 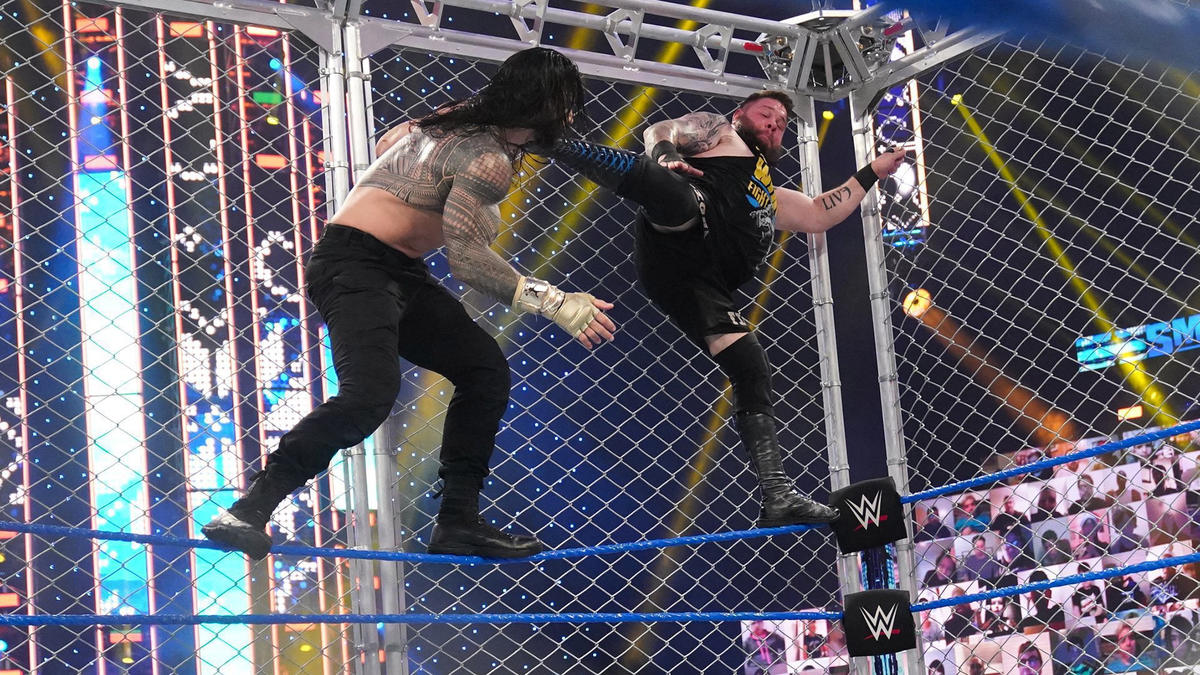 Roman Reigns and Kevin Owens celebrated the holiday the same way Jesus’ birthday was originally heralded; by beating the hell out of each other. The two fought again for the WWE Championship in a steel cage match. Roman started out with some hard punches, and then tossed KO into the steel wall. He claimed things were already over, but Owens managed to evade the Superman Punch and landed a DDT to take over. He got a frog splash but Reigns kicked out at 2. Both men traded finishers and pins, but not even the pop up powerbomb could get the job done. Owens climbed to the top turnbuckle and they fought for the upper hand; Kevin landed a huge suplex, but Reigns still kicked out. He countered a stunner and landed the Superman Punch, but even that didn’t keep Kevin down. Reigns locked in the Guillotine but Owens fought out and hit the stunner for another 2 count. Owens tried to scale the cage but Roman knocked him down. In a shocking second, Kevin kicked out of the spear and made it to the exit. He slammed Reigns’ head in the door until Jey Uso came to his cousin’s defense, only to take a door shot to the noggin as well. Roman just pulled Kevin back inside, but ate a Stunner. Uso ran up to cuff Owens to the cage wall, trapping him for good as Roman waltzed out the door and retained. This was a really great, physical follow up to their TLC match with incredible work from both guys. Reigns continues to dominate with this persona, and Owens fulfilled his role perfectly. 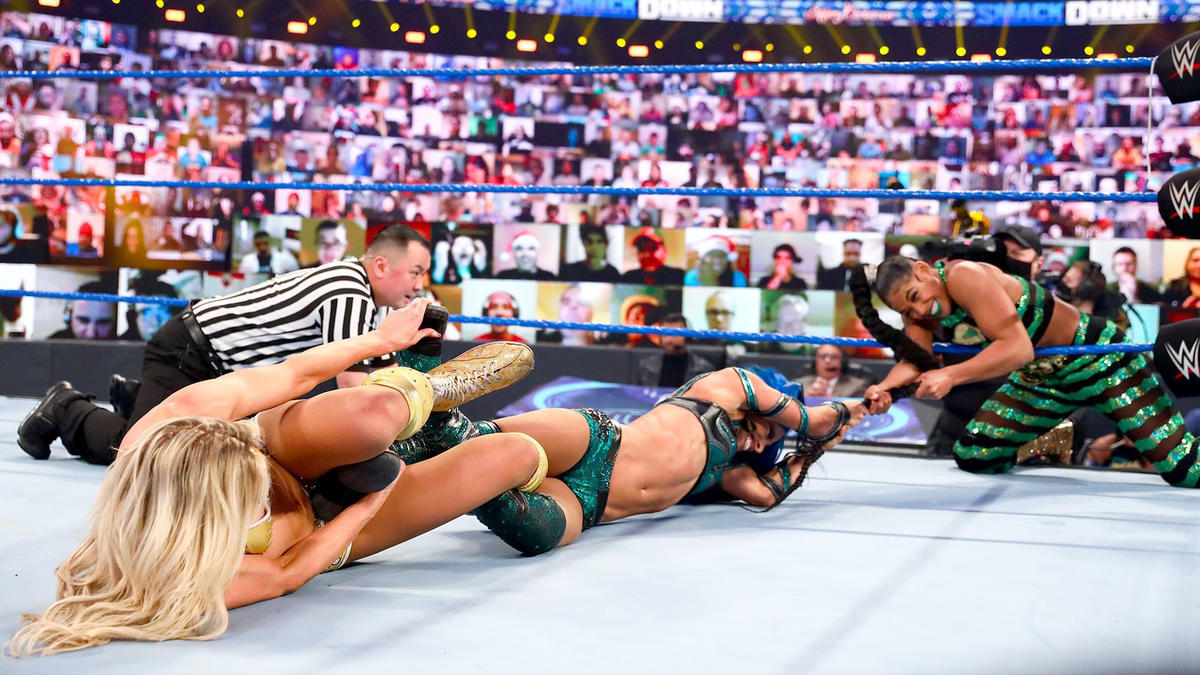 For a real Christmas treat, we got another Women’s tag match. New champions Asuka and Charlotte faced Bayley/Carmella and Bianca Belair/Sasha Banks in an elimination match. While the sheer power of Bianca and Sasha teaming is potentially too much for even the award winning WWE ThunderDome, this was a fun match that showcased all the women involved. Bayley and Charlotte started things off, with Asuka tagging in to back up her partner. A couple quick tags got Carmella in briefly, before Banks hit a Meteora on Asuka. Charlotte and Bianca went back and forth in a great bit, with Belair hitting a Glam Slam on Flair. Bianca then got a spinebuster on Bayley and Sasha followed it up with a frog splash to eliminate Bayley and Carmella. Sasha went for the Bank Statement but Charlotte reversed, Bianca tagged in with the help of her braid to face Charlotte again. Flair locked in the Figure Four, but Banks broke it up. A few tags later and Bianca got a powerbomb on Asuka, but the Empress kicked out to tag her partner. A Codebreaker from Asuka and Natural Selection from Flair pinned Bianca for the 3 and kept the titles in the champ’s hands. 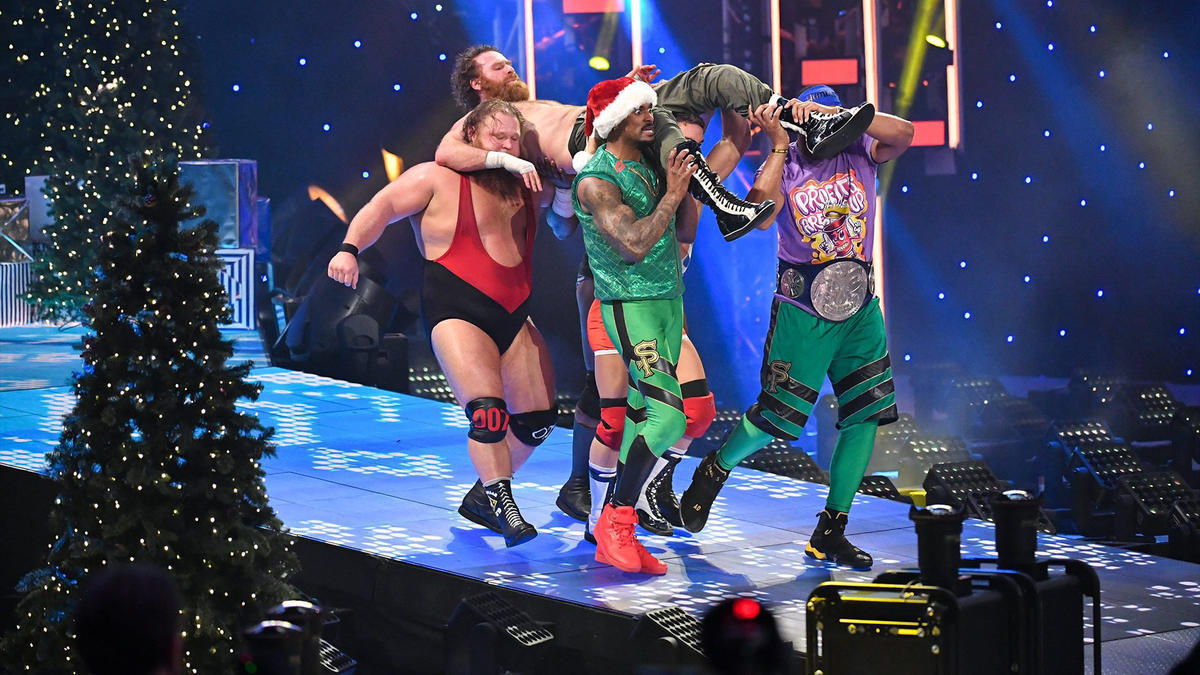 Sami Zayn also had to defend his IC Title in a Lumberjack Match on Friday, a fact that he was very peeved about. As someone who’s worked customer service on Christmas, I certainly don’t blame him. The heel lumberjacks made things much harder for E here, laying in punches every time he ended up on the outside. He still fought back with a clothesline and attempted a splash on the apron, but Sami just rolled out of the way. The heels went after E again until Sami landed a big dive and wiped him out. Big E tried to come back with a series of duplexes, but Sami slipped away when he tried to hit The Big Ending. Sami tried to run off, but the lumberjacks tossed him back in. After kicking out of a Sunset Flip powerbomb, Big E speared Sami through the ropes, but once again found himself surrounded. This time, the heels were fought off by the face lumberjacks, and everyone started brawling. Sami tried to escape quietly, like me sneaking out of the room at Thanksgiving dinner, but Apollo Crews ran him down, and he was carted back by the babyfaces. Back in the ring, Big E got a belly to belly and The Big Ending to score the win and secure the IC title for the second time in his WWE career. As much as I’ve enjoyed Sami’s run as champ, it’s great, and very deserved, to see E succeed as a singles star. 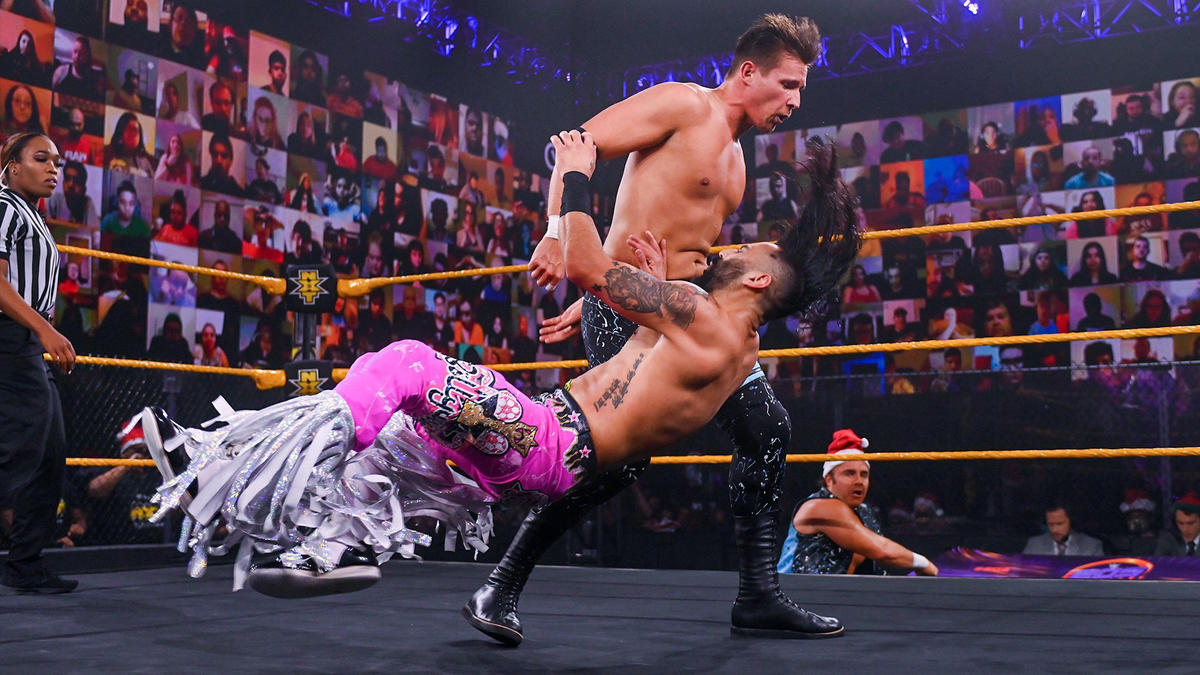 205 Live was not immune to festive marketing, although they didn’t seem to have gotten the same title match memo that SmackDown received. The show opened with Samir Singh vs Chase Parker, with each man accompanied by their respective tag partner. Sunil continued to interfere early on, even after Matt Martel went after him. Samir gave Parker a suplex on the outside that laid him out for a minute, then got him in a sleeper in the ring. Parker escaped and Samir rolled to the outside to regroup- then re-entered the ring looking a little different. He had swapped with his brother, but it took the ref a good few moments to register that this man was wearing totally different gear and had chopped the majority of his hair off. He sent Sunil backstage, but Samir tried to take advantage and hit Parker with a cheap shot. Chase moved out of the way, causing Samir to nail his brother instead. Parker landed a buckle bomb to score the win for Ever-Rise, and the Bollywood Boyz are going to have to come up with another Netflix Original pitch.