But hey, it's John Morrison!

WWE is building towards Royal Rumble with some rematches, some returns, and Andrade dressed like a creamsicle. I actually don’t cover that in this recap but please look at this fit. He and Zelina look like they’re cosplaying as sexy traffic cones. God, I love them.

After tussling with Rollins and AOP last week, Samoa Joe announced he had enlisted the help of a mysterious surprise partner to give him and Kevin Owens a hand this week. Owens was skeptical, but Joe promised to get somebody who could have their back. Someone who knows how to put on a show. Someone who’s big and intimidating even in a singlet from 2008. The main event saw the Monday night messiah, a real name that I didn’t even make up, and AOP take on Owens, Joe, and….. weeeeellllllllll.

The professional show himself came out to join the large adult son squad, and the crowd went off. Others have pointed out that 2019 was the first year since being with the company that Big Show didn’t wrestle a single match in WWE, but I’m glad to see him already make up for it. Was it completely out of left field? Yes, but it’s not like I’m gonna be mad about it. Look at the smile Big Show wore on his way to the ring. All he wants to do is hand out tiny toy belts in Times Square and knock out equally tiny men. He’s living his best life here. The match was ultimately a DQ when Rollins hit Big Show with a chair, then all six men brawled. Big Show hit Rollins with a KO Punch, and AOP dragged their limp leader out of the ring. Next week, we’ll supposedly see a “fist fight” between the two teams, although no one seems very clear on what in the world that is.

Brock Lesnar and Paul Heyman kicked off the first Raw of the decade, wishing us a ‘Happy New Year, bitches.’ Heyman claimed Lesnar told him no one was worthy of challenging for the WWE title at Royal Rumble, which sounds a little fake, as we’ve never heard Brock speak that many words without cursing before. Heyman then announced a first ever—Houston’s favorite son Lesnar is entering the Rumble at #1. This telegraphs a bit of the ending; whoever wins is sure to challenge for the Universal Championship now, and I imagine Brock’s challenger will come from whoever eliminates him. But it’ll be fun to see him in the rumble, as no one embodies the frantic, heated, get your shit in for three hard minutes and take a nap on the outside energy of the rumble match more than Brock himself. Looking forward to finding out which former cruiserweight champion is fed to him to be eliminated in 6 seconds.

Look, I’ve never seen the appeal in Drew McIntyre. Aside from his banger finish, the man’s whole schtick is wearing a duster and having muscles. There’s not a lot to work with there. But we started to see a different side of him this week, when he offered slightly more personality beyond “big” and “Scottish.” Monday night’s match with No Way Jose, undercard legend, started with McIntyre knocking down half the conga line. Jose got upset that it’s 2020 and ravers are still the target of bullying, but McIntyre fought him off then went after the conga line again, much to the delight of the crowd. It seemed like he was actually having fun playing to the audience, having them countdown before he hit Jose with the Claymore. I don’t know if this was a one off in letting him show character beyond “large man with wet hair,” but it was possibly the most I’ve been entertained by McIntyre since he came to the main roster.

Extremely excited that I get to start including NXT here at the same time the Dusty Rhodes Tag Team Classic starts, because there are few things I love in wrestling more than tag team competitions. In an attempt to make up for the fact that the Forgotten Sons, the team with the absolute most applicable name in wrestling, made it all the way to the finals in 2019, the first match of the tournament saw them fall to Imperium’s Barthel and Aichner. The second was Undisputed Era beating Gallus, NXT UK’s Wolfgang and Mark Coffey.

Two solid tag matches here with the right teams advancing; Undisputed Era remain as over as ever, while Imperium have become a very solid stable over the past year. Next week we’ll see the ragtag team of Matt Riddle and Pete Dunne, which is a kind of “sure, fine, whatever” pairing, as well as reunion of Kushida and Alex Shelley. Time Splitters are back, baby!

You Don’t Even Go Here

In addition to Dusty Cup action, we got a very good three on three women’s match, featuring Bianca Belair, Io Shirai, and Kay Lee Ray losing to Rhea Ripley, Candice LeRae, and Toni Storm. NXT’s women’s division is so stacked that I’d be excited to see Ripley take on any of these women as challengers. We also got some classic zingers from Belair as she ran down the other women potentially challenging to Ripley’s title, including telling Toni Storm “you don’t even go here.” Me next, Ms. Belair.

Lacey Evans was supposed to face Sasha Banks on Friday, but Snoop Dogg’s cousin was nowhere to be found. It was Bayley who showed up on the titantron, telling Lacey that Sasha was just too busy to bother with her right now. Banks’ new gimmick is an Instagram influencer, or maybe just a rich trust fund kid, but either way, it’s hilarious and works. Bayley’s previous excuses for her friend have included she was recording a rap album and on vacation in LA. Next week I’m sure she’ll be volunteering in Greece or adopting a dog from Texas. Lacey responded with a promo about loving middle America and saluted a few times, which got the audience chanting USA like it was the Republican National Convention. Bayley then insulted Lacey’s daughter again, prompting Evans to rush backstage and the two women slugged it out for a while. The crowd being super behind Lacey really helped this segment, even if her promo was just “I’m an American mother, what’s better than that?”

WWE seems to be doing almost everything in their power to downplay John Morrison’s return, and I can not for the life of me figure out why. This is a man who starred in the pilot of Netflix’s GLOW. His acting resume includes a film about a wrestling, talking Jack Russell terrier. And you’re going to reintroduce him to your audience by way of a blink and you’ll miss it backstage segment, only to follow it up with an interview leading to a rematch we just saw last week? Puzzling.

That’s not to say Morrison on Miz TV was bad, but ‘wasn’t bad’ is about the highest praise most interview segments on WWE get, unless it’s Lavar Ball on Miz TV (I will never forget) or Becky and Shayna’s crazy romantic tension. The originator of sunglasses inside went on to attack Big E during the rematch between Miz and Kingston, which set up a match next week with Morrison and Big E. I’m stoked to see Miz and Morrison again, but using the newly returned star to build this feud between him and Kingston just feels kind of weak. 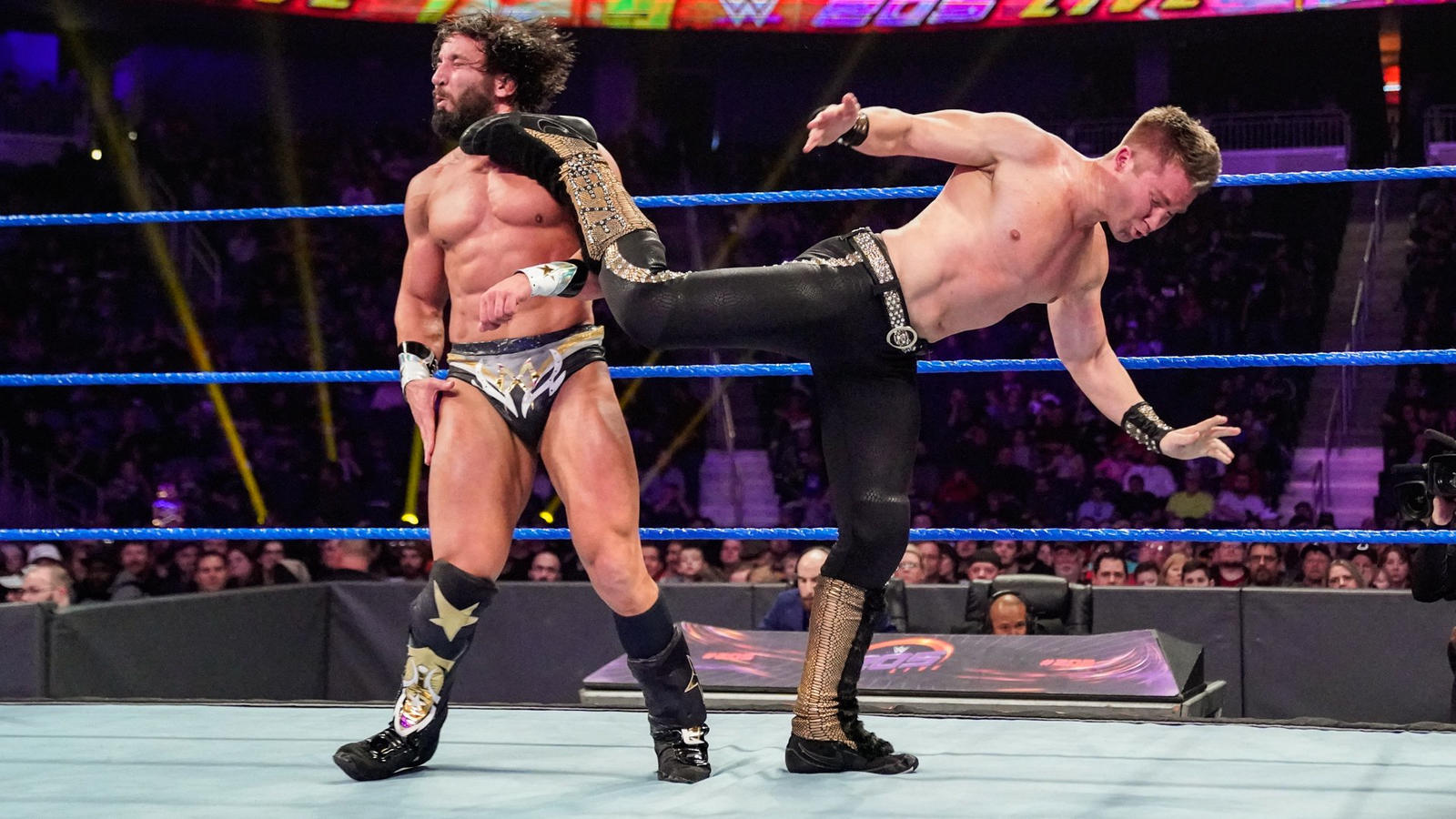 One of the best things in recent months has been 205’s inclusion of NXT guys. For the first three years of its existence, it seemed like when you debuted on 205, that was where you primarily wrestled, and there was little crossover with other brands. But since combining the purple brand with NXT, plenty of NXT stars have had the chance to show off against the cruiserweights without being permanently drafted. Tyler Breeze was a surprising pick this week, given how popular he and his partner Fandango are at Full Sail, but with Fandango’s recent injury, it was great to see Breeze in singles competition. He faced Tony Nese in a short but fun main event, getting a quick win over the former champion with a sneak roll up. This is the ideal use of Breeze while Fandango is out of commission; there’s plenty of really good singles match ups he can have on 205 and NXT. I’d love to see him against the champ Angel Garza, if clash styles with Danny Burch, especially since that could lead to a tag match up down the line if Oney Lorcan ever makes it out of no man’s land. 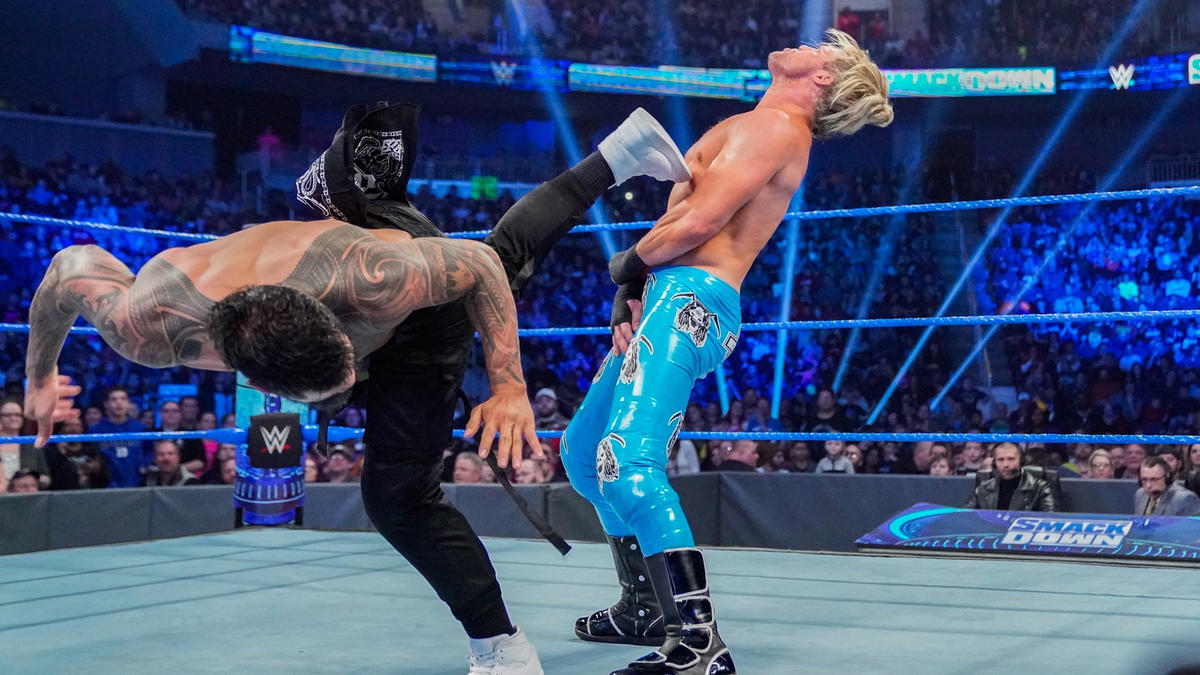 WWE Banger of the Week: The Usos vs King Corbin and Dolph Ziggler

Roman Reigns’ apparent only friends in the world, his cousins The Usos, came to his aid last week to prevent the wasteful use of dog food by Corbin and Ziggler. It’s been a long time since we’ve seen Jimmy or Jey compete, and I was still struggling to tell them apart here. But so was commentary, so I felt a little bit better, especially considered they went out and got identical haircuts, like my twin cousins at Christmas. The Revival came in for the distraction when The Usos had the upper hand, but Reigns followed them out to even the numbers.

Jey looked like he was about to get the win with a huge splash, but Corbin pulled him off Ziggler and threw him into a post. A huge spear from Reigns to Corbin caused the DQ, but then a surprise return from Robert Roode attacked Reigns from behind. Roode looked jacked as hell and tore his shirt off to prove it. ZigRoode took out The Usos while Corbin dragged Roman over to look at his beaten and bruised family, before laying him out through the announce table. Dastardly stuff from King and company here, but sets up a great rematch with Roman/Usos and Corbin/ZigRoode. 2020 may be the year I genuinely admit I’m a fan of Baron Corbin. Or, I’ll just keep making jokes about it and pretend I didn’t doodle “Mrs. Queen Corbin” on my desk in study hall.