Hey, it's that guy from Numb3rs!

As NXT continued Dusty Cup action, the main roster gave us two very different shows this week. With Drew McIntyre still quarantining, Raw relied on Alexa Bliss’ firepower, references to a 15 year old movie, and an appearance by your favorite superstar from 1999. On the other hand, SmackDown offered a protest of their unfair policies, two middle aged guys yelling at each other, and some very excellent wrestling. Hard to say who won this week.

Fired Up, Blissed Out

Randy Orton opened Raw with yet another 10 minute promo, this time about his facial scars post fireball from Alexa last week. It’s worth noting this followed an MLK opener, which was some absolutely wild dissonance. Randy stood in a black box with a burn mask over his face as he lamented his red nose. He blamed The Fiend for Alexa’s fire powers, and claimed that he regretted his own weakness in not setting Bliss ablaze when he had the chance. Still, he promised he would be in the Rumble, scarred face or no, and he was going to metaphorically burn everyone else’s dreams. This story continues to be a wild ride, helped in part here by the fact that Randy is already very proficient in long winded promos that don’t tell us very much. Maybe we’ll see some fire action in the Rumble, who knows.

Later in the night, Alexa hosted Asuka at her playground, where The Empress snubbed Bliss’ imaginary friend and had the gall to try and dance it out. When Asuka mentioned The Fiend, Bliss got so mad the rocking horse started to move, and we went into the match. Like her sweater wearing friend, Alexa was unphased by Asuka’s offense, smiling at the blows. The lights went out, then came back up to reveal a goth costume change. Asuka was still game, counter the Mandible Claw and going after Bliss despite the wardrobe upgrade. Alexa absorbed the strikes and managed to hit Sister Abigail to win, then used her Fiend voice to offer one final “Let me in.” This wasn’t a real match so I can’t grade it on that level, but Bliss is certainly giving it her all as she transforms into Mrs The Fiend. We’ll probably get her challenging for the Raw Women’s Title soon- and there’s honestly no one better to go against a possessed cheerleader than Asuka. 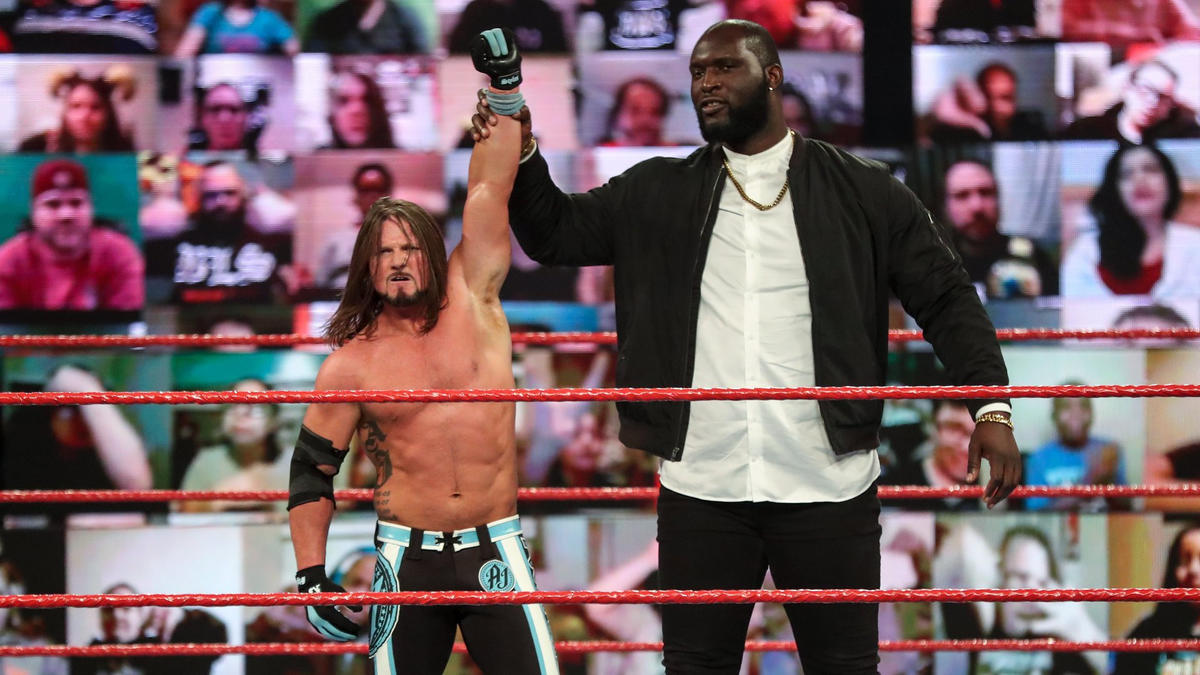 AJ Styles continued to ruin dreams this week as he told us that 50 First Dates was one of his favorite films, losing what little respect any of us may have still held for him. He also faced Ricochet in another Royal Rumble qualifier match. I guess it wasn’t actually a qualifier, as Adam Pearce just said that if Ricochet could beat Styles, it would “go a long way” towards him getting a spot in the Rumble. We never got that far, unfortunately, as the Phenomenal One managed to win again. Styles started out controlling Ricochet, before he countered the Styles Clash with a quick huricanrana. Ricochet wiped out AJ on the outside right in front of Omos, but quickly found himself caught by the turtleneck giant, who dropped him hard. A German Suplex got him a 2 count on Styles, who retaliated with a Brainbuster for another near fall. Ricochet caught the Phenomenal Forearm with a Recoil, but took too long to cover, and Styles still kicked out. Ricochet hung up AJ on the ropes, but found himself caught and bounced off the rope right into the Styles Clash to end his run at the Rumble. This was a good match, predictably given who was involved, but I am a little surprised to see Ricochet lose his shot at being around 29 maskless people in close contact. 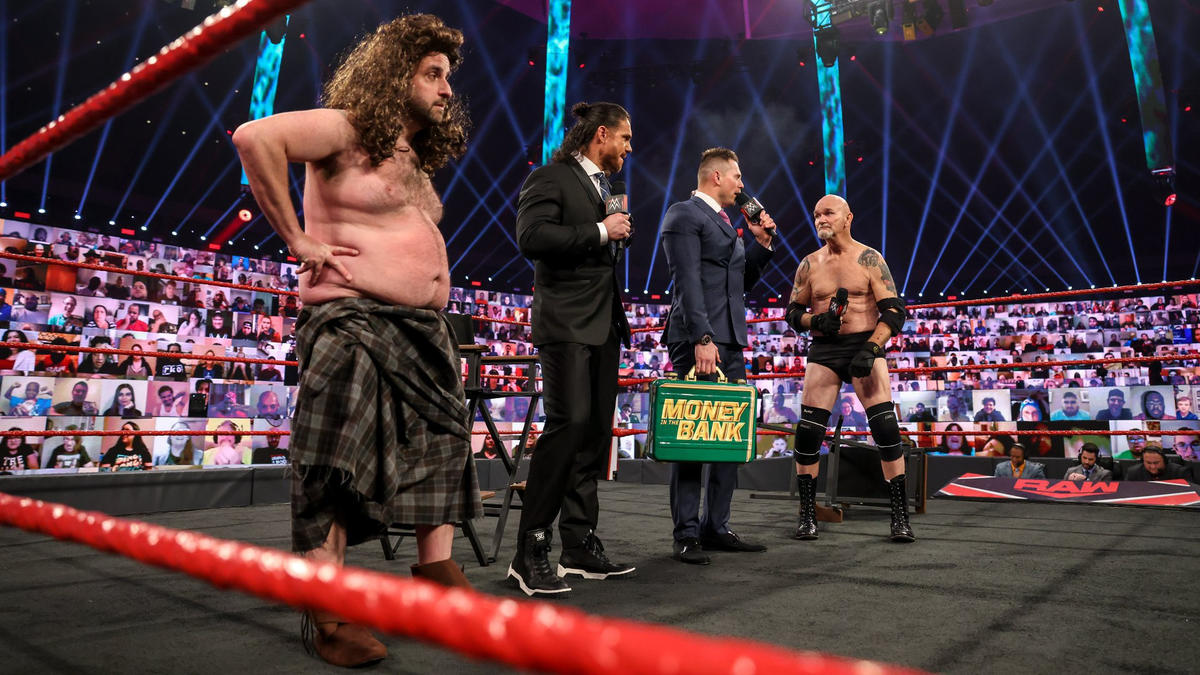 Miz and Morrison advertised Goldberg on a very special edition of The Dirt Sheet. Once they played his music, we got something even more surprising than a muscly middle aged dad- Gillberg, making his second appearance in the past 5 years. I can’t begrudge this man getting a pay day doing the same schtick since pre-Y2K, but I also can’t say this segment was anything close to entertaining. After Gillberg got fired up and knocked a chair over, Drew McIntyre came out to join him. Played by the elf I had a mad crush on in The Santa Clause, this McIntyre had an over the top accent and drooping kilt. Crack on USA Network; what have we all come to. Morrison interrupted to complain about the accent, then he and Miz argued about the validity of the segment, which I guess it as close to lampshading as WWE wants to go. This ended with Miz promising both McIntyre and Goldberg would lose at the Rumble when he cashed in, but he declined to comment on a potential Numb3rs reunion. So that’s still up in the air. 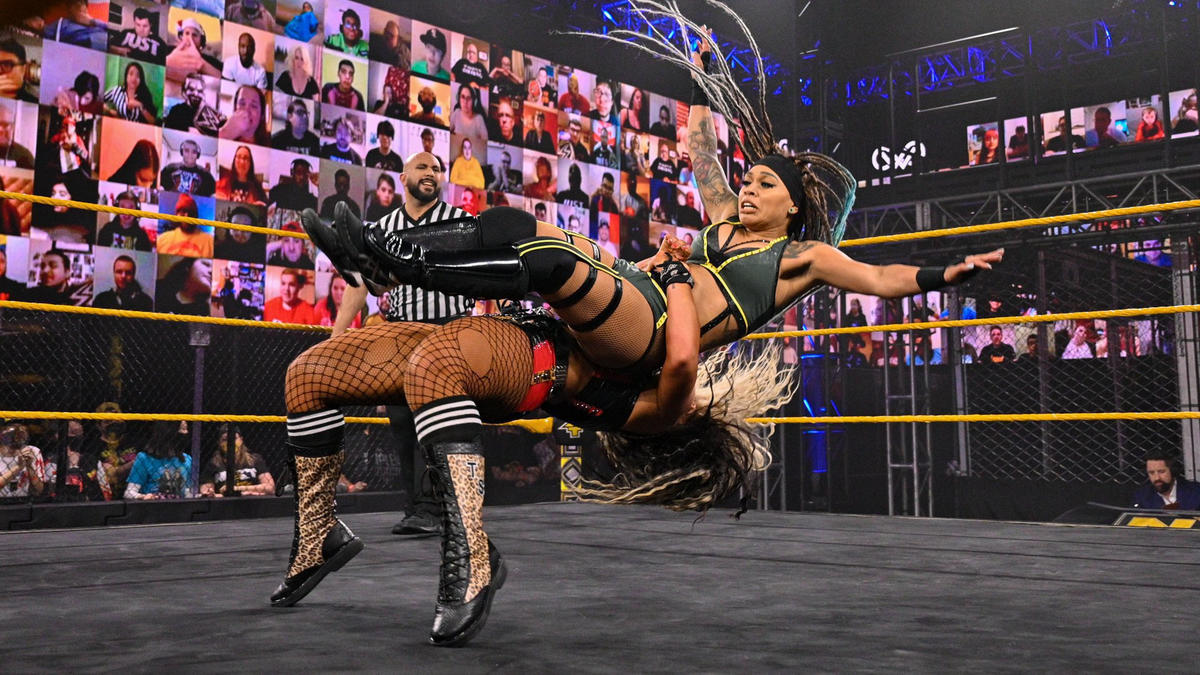 NXT launched the first ever Women’s Dusty Rhodes Tag Team Classic this week, featuring exactly 16 women. Sometimes, I really hate it here. Wednesday night gave us Mercedes Martinez and Toni Storm vs Kacy Catanzaro and Kayden Carter. Martinez used her power advantage to take control early on and hit Kacy with a slam, knocking her down harder than COVID-19 is gonna hit following that very socially undistant birthday party Ricochet threw her last week. Storm and Carter tagged in, with Kayden getting the best of the kiwi. Catanzaro and Martinez fought on the outside, while Storm hit a German suplex and got Carter in a Boston crab. Suddenly Io Shirai interfered, paying Mercedes back for the beating she received a few weeks ago by laying her out beside the ring. Catanzaro hit some flippy splash from the top rope to get the win and send her and Carter to the next round. Despite their COVID unpreparedness, it’s good to see Catanzaro and Carter get some attention as a team, while Storm and Martinez can certainly take the hit. We’ll no doubt get Martinez challenging Shirai very soon- which should be fantastic. 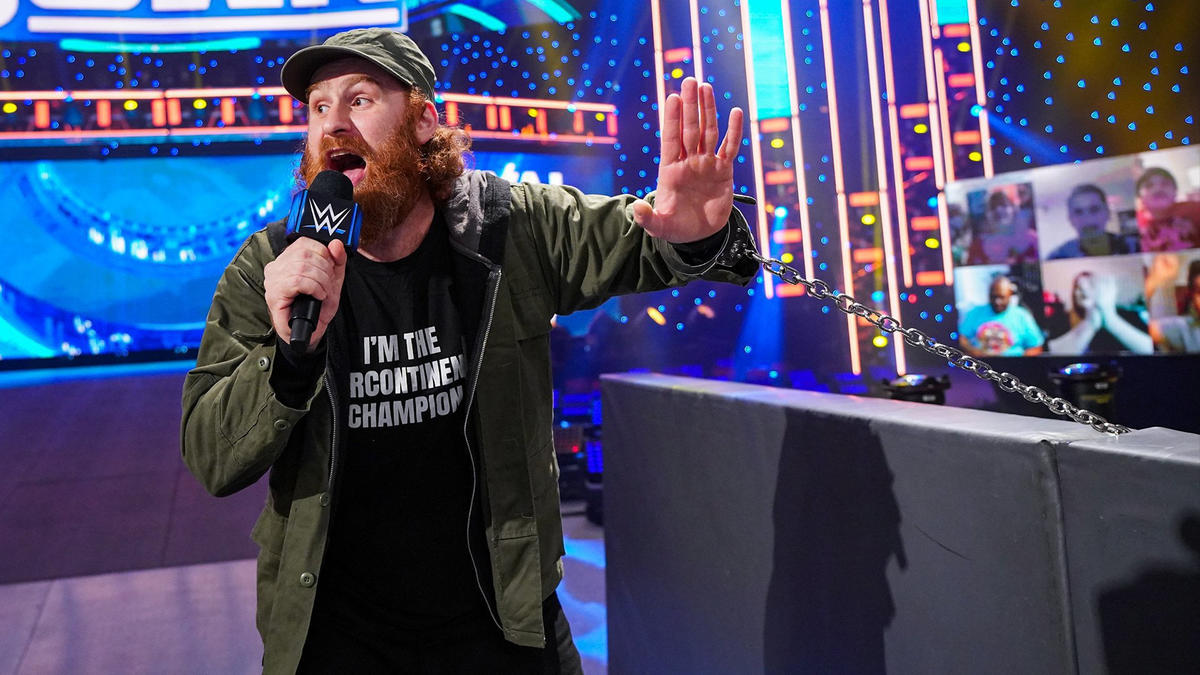 Early on Friday night, Sami Zayn interrupted a Tom Phillips corporate shill promo by handcuffing himself to the barricade. He declared himself for the rumble and then spoke directly to his award winning film crew, detailing his loss to Apollo Crews last week that gave Crews his shot at the IC title tonight. He then hung out for a good hour, standing ringside as Charlotte Flair and Asuka beat The Riott Squad, then trading French remarks with Cesaro. As Big E entered for the match, Sami busted out his best insults, then went and uncuffed himself during the match just as Crews was taking over. He nailed Apollo with a Helluva kick to cause the DQ, and hit Big E with one for good measure. I’m not surprised they’re keeping Zayn involved in this feud, and this was a solid way to keep things moving forward without making anyone look bad. We’ll no doubt get Big E and Crews at the Rumble, potentially a Triple Threat with Sami scheming in the background. Given what we’ve seen between these guys, I can’t be mad about any of it. Crews and E work fantastic together, and Sami’s documentary schtick isn’t as bad as it probably should be. 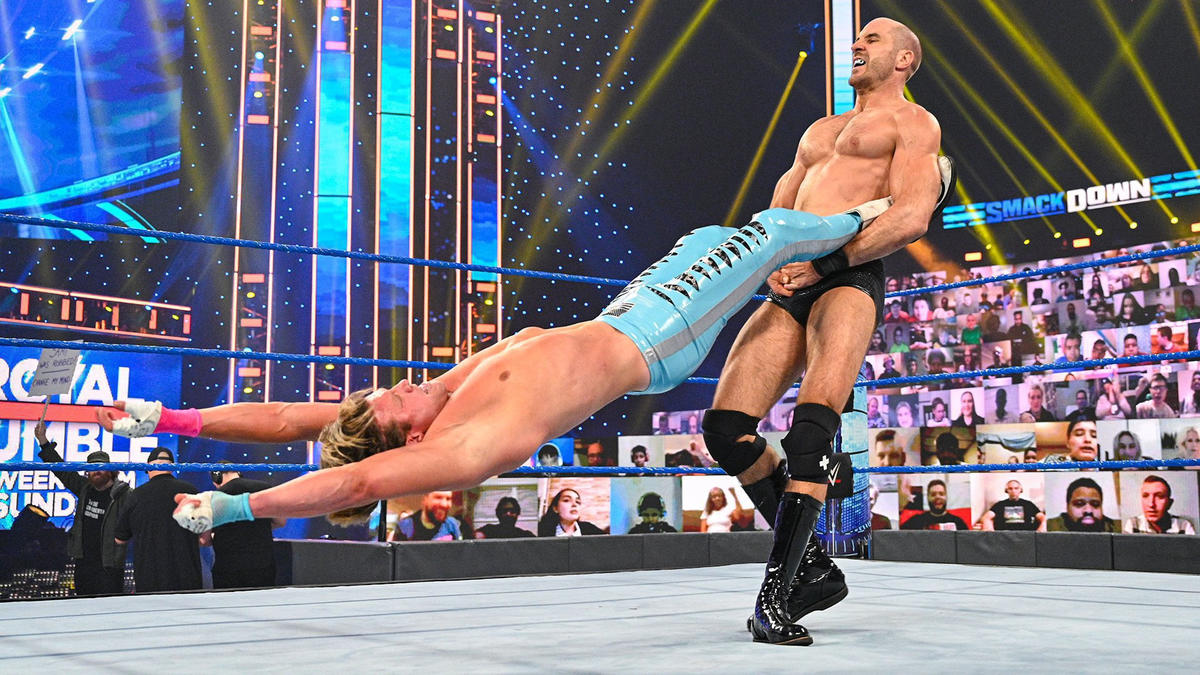 Daniel Bryan came out to remind us all of the Royal Rumble rules, which we definitely haven’t heard 8 times a show for the past 3 weeks. Cesaro interrupted this impassioned lesson to remind Bryan of his victory last week. He told Daniel to step aside for the hot new piece, then issued an open challenge. Ziggler csme out, because he loves money and wants a mania moment to get more of it. Solid logic there from the tag team champ. Bryan sat on commentary as Cesaro controlled on the mat, keeping hold of Ziggler. He got the Dirty Dog in the swing for a good minute, but Ziggler still kicked out. They traded roll ups before Dolph hit the ZigZag for a 2 count. He then went for a Fameasser, only to find himself caught in a powerbomb. Cesaro pulled him up to land the Neuralyzer and score another big win. Bryan put him over on commentary as the man with the most momentum rolling into the Rumble- with two well done singles wins back to back, this is probably the most momentum Cesaro’s had since 2014, and I’ll take it with my bare hands. 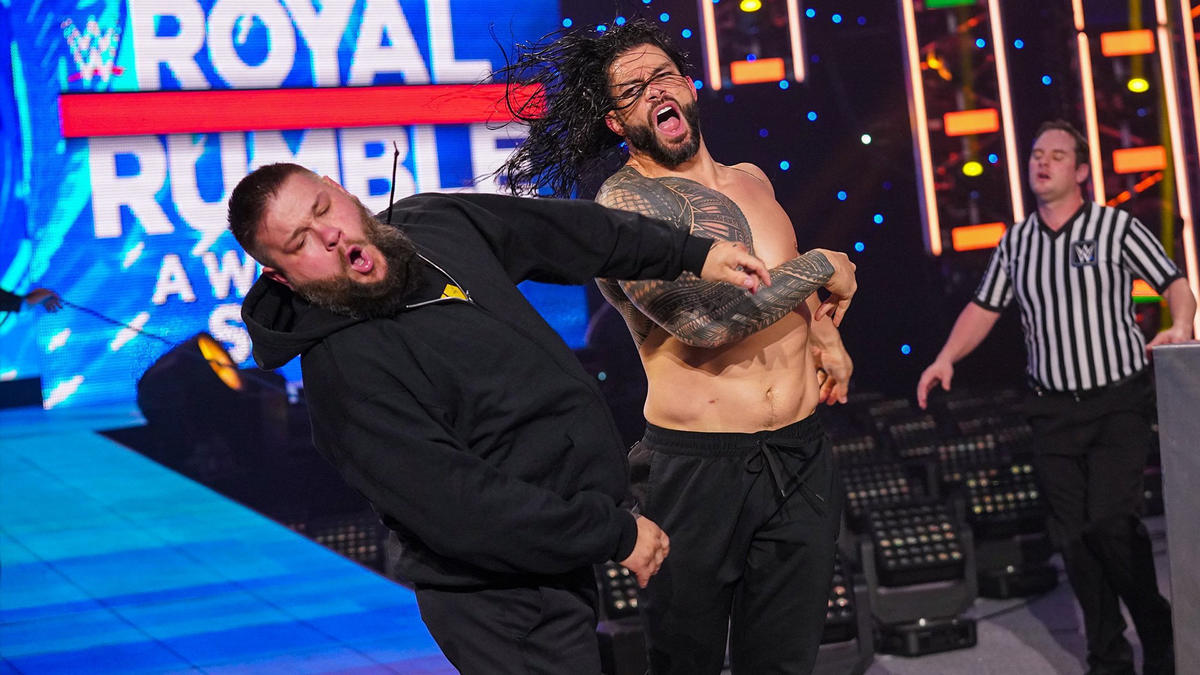 Men in Suits Get Down and Dirty

Reigns and Heyman once again kicked us off, with Roman complaining about how Adam Pearce is a bitch for making him read the fine print. He said he’s never complained about his body, despite wrestling literally all the freaking time. When Pearce tried to calm Roman down, he went to town on Pearce’s greatest faults like a 12 year old mean girl. Heyman let out a giggle, prompting Pearce to call him out. Heyman then offered a genuine dream match; Paul Heyman vs Adam Pearce in the main event. Who hasn’t been clambering for this? Pearce eagerly accepted, and we were in for a battle of the men you would mistake for your uncle at a given distance.

Heyman took a page out of Pearce’s book as he exaggeratedly slipped on the stairs and claimed a leg injury just before the match, promising his own suitable replacement. Out came Roman Reigns to heroically destroy a man who hadn’t wrestled in 6 years. He nailed Pearce with a Superman Punch immediately, but the official came back momentarily with some strikes of his own. A low blow on the outside let Reigns run Pearce through the barricade and hoist him up onto the real bleachers of the virtual crowd like he and Uso did to KO a few weeks ago. Speak of the devil and Owens appeared, going after Reigns to save his boss. Marx would be disappointed, but Kevin is still a man of the people as he nailed Reigns with two stunners and a pop up powerbomb through the table to end the show. This was a solid swerve to give us Owens and Reigns once more, and it’s hard to picture either of these guys putting on a bad match. I guess we’ll have to hope to see Heyman in the ring another time. 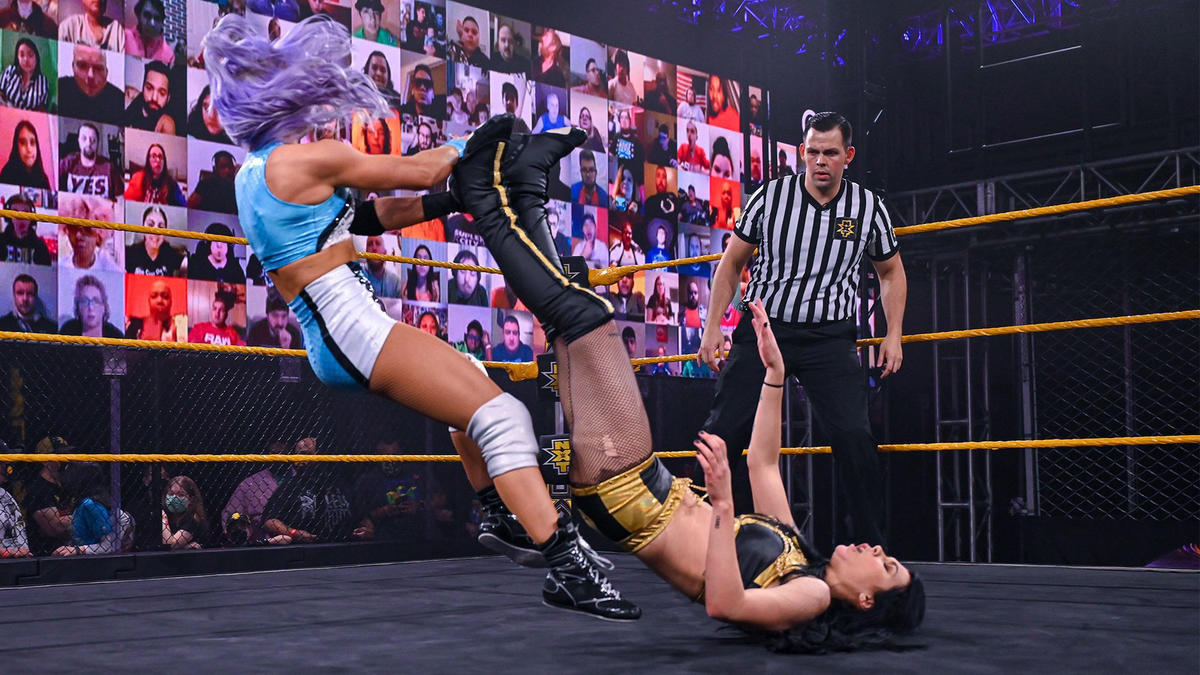 The Way, The Win

205 Live played host to the Women’s Dusty Cup as well, proving that the purple brand can truly break all barriers. Candice LeRae and Indi Hartwell took on the debuting Gigi Dolin and Cora Jade (formerly Priscilla Kelly and Elayna Black). This was fantastic- Kelly has been one of my fav indie stars for a while, and I really hope NXT has great things in store for her. Jade and Dolin worked really well together here, but the experience of The Way kept them in control. LeRae came back from a huge knee to the face to nail Jade with a series of punches on the mat. She finally made the tag to Gigi, who took down Indi with a roundhouse kick. Hartwell kicked out, and the two teams traded a multiple near falls. Indi finally landed a side bomb to send her and LeRae to round two. A great debut for Dolin and Jade here, and a very solid showing for The Way. More ladies on 205, please.