Turns out Christian Mingle has nothing on Friday Night SmackDown

WWE has announced their upcoming draft, but instead of doing what seems to be the logical thing and waiting until after the next pay per view, we’re getting it smack dab in the middle of the month. It’ll start with SmackDown next Friday and conclude with Raw the following Monday, giving us a mere two weeks before Hell in a Cell to build new feuds on the two brands. I’m really thinking these guys work best under pressure. Before we play musical chairs, we’ve got a whole week of WWE programming to cover, so strap in, because it’s a bumpy ride. 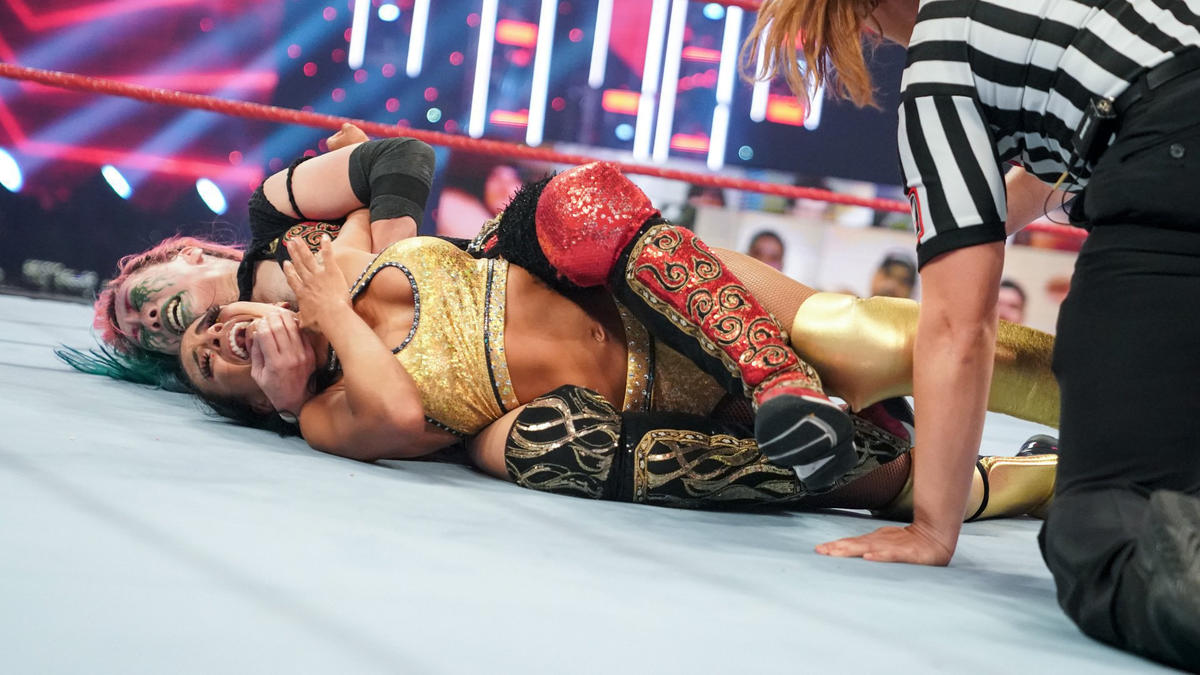 I know WWE loves PPV rematches more than most things in life, and for the first time I was kind of excited for this one on Monday. What we saw of Zelina at Clash of Champions was great; she’s been out of the ring for so long, it felt almost like a debut. But her rematch with Asuka on Raw was much of the same stuff we’d just seen, which put a little damper on my excitement for this feud. She went after Asuka’s arm again, locking her in submissions and holds to wear her down. The two seemed pretty evenly matched for most of this- Asuka is one of the best at making her opponents looks as tough as they need to. Zelina definitely looked very smart here, almost getting the pin before Asuka put a foot on the bottom rope to break it. Vega got frustrated, and Asuka was able to get her in the Asuka Lock to win again. I’m still interested to see where they go from here, as the two could put on a very good match if given enough build and time for Hell in a Cell, especially with Vega being told off by Andrade just after the match. It seems like we won’t see her managing El Idolo again anytime soon. 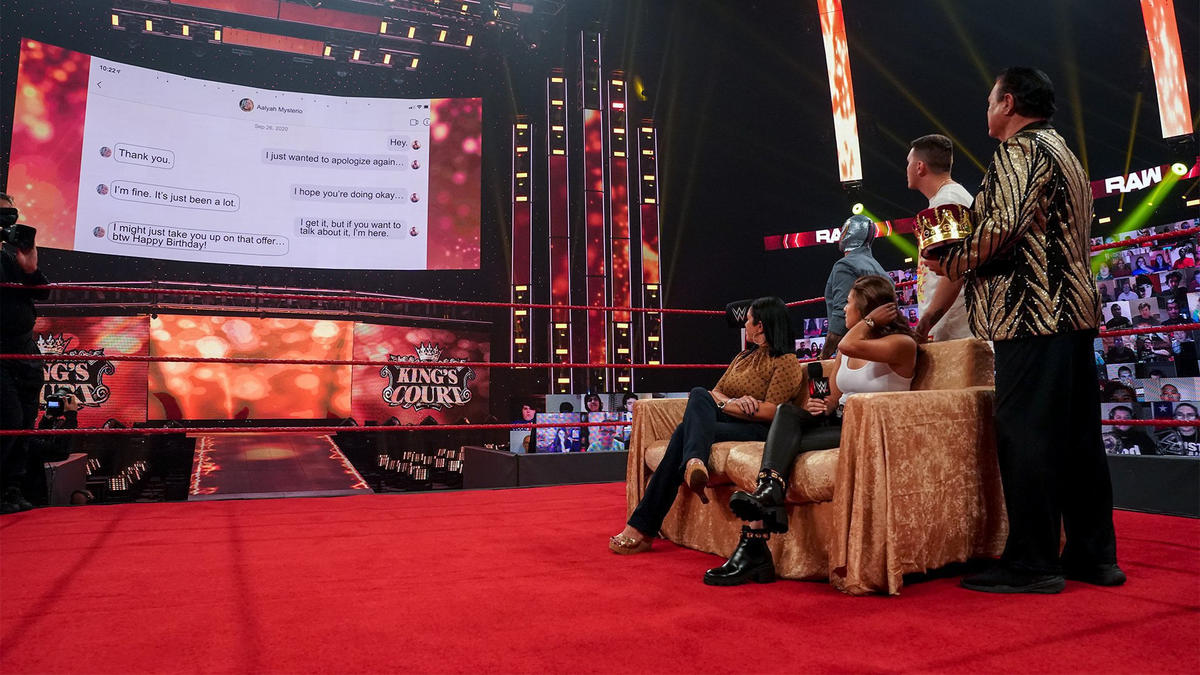 The Mysterio family can’t keep out of Soaps Weekly, and their drama keeps getting stranger. Aalyah told us she was mad that her dad said she was naive last week, but not mad enough to think being friends with Seth Rollins was a good idea. To be fair, if one of my dad’s coworkers was insinuating I might not be his biological child, I’d probably remove myself from that conversation too. Rollins then popped up on the tron to expose INstagram DMs between Aalyah and Murphy, because I guess nothing is sacred anymore. Putting aside the fact that leaking wrestler DMs is a pretty damn hamfisted angle right now, the messages were as boring as you can imagine someone would send to a guy their dad and brother beat up on live television. Still, the thought of his sister wishing Murphy a happy libra season made Dominik mad enough to go after Murphy backstage. The two went on to have a proper match, with a fired up Mysterio going for a kendo stick to teach the Aussie a lesson. Based on leaked messages, there are definitely other SmackDown roster members I’d beat first, but I guess that’s his call. Aalyah ran to ringside to try and talk Dominik out of it, and Murphy used the distraction to roll him up and get the win. Dominik then called his sister naive for protecting Murphy, and she slapped him. I don’t know why the Rollins/Murphy vs Mysterios thing is still happening, and I don’t know why WWE thinks any teenager would DM her dad’s 31 year old coworker. This angle isn’t doing anything for me. 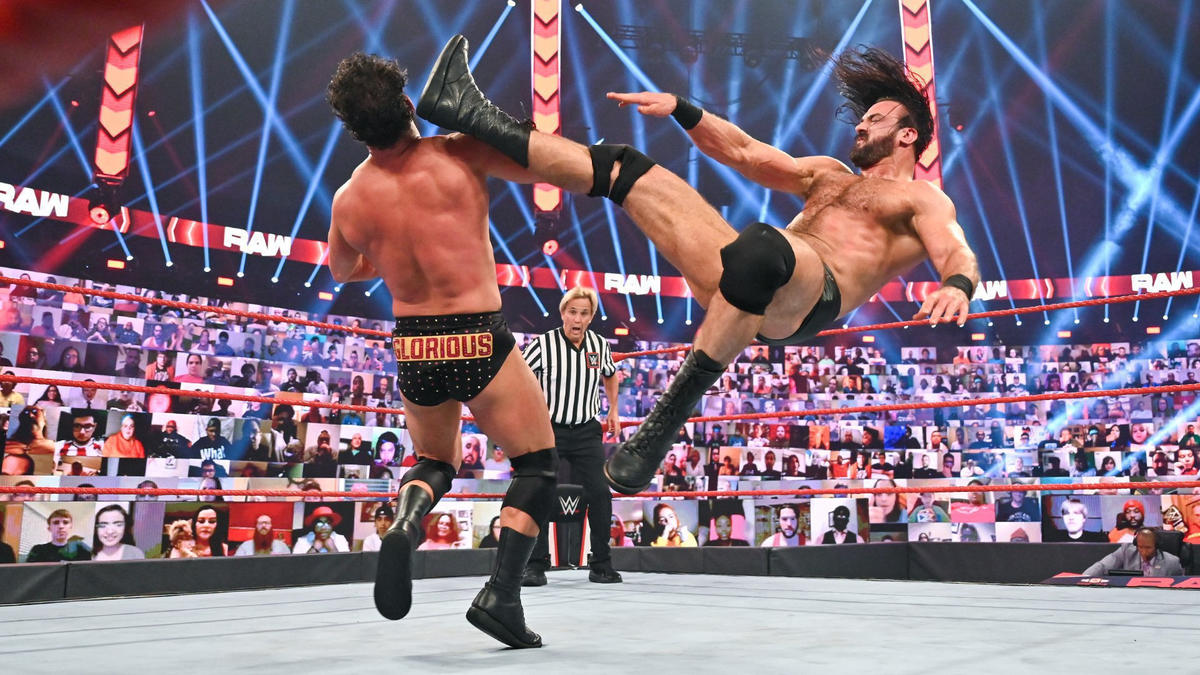 After driving the snakes out of the ThunderDome, Drew McIntyre put his title in the line again in an open challenge. He specified the challenger must be someone he hadn’t faced yet, which ruled out Orton in a funny mustache. Later on, we saw Ziggler talk to Adam Pearce and ask to offer his own challenger to McIntyre. Drew beat Ziggler’s ass a few months ago, and I guess Dolph’s still hot about it, because he brought back a true killer to do his work- a returning Robert Roode. Best we had a virtual crowd for this one, because the lack of pop when “Glorious” played would have been pretty sad to hear. The match itself was as fine as could be expected; Ziggler ran interference for Roode, and almost eating a Claymore for his trouble. Roode saved him by hitting Drew from behind, and landed a Glorious DDT, but McIntyre kicked out. Drew fought back to land the Claymore and win, to very little surprise. As an open challenge, this was kind of a bummer, but I guess it was fresher then seeing Ziggler and McIntyre go at it.

Following the main event, we watched Randy Orton put on his night vision goggles and enter the game room where all the people who dicked him over on Sunday were hanging out. He hit the lights and went to town with chair shots, but nobody even piped in a Wilhelm scream, which feels like a real missed opportunity. 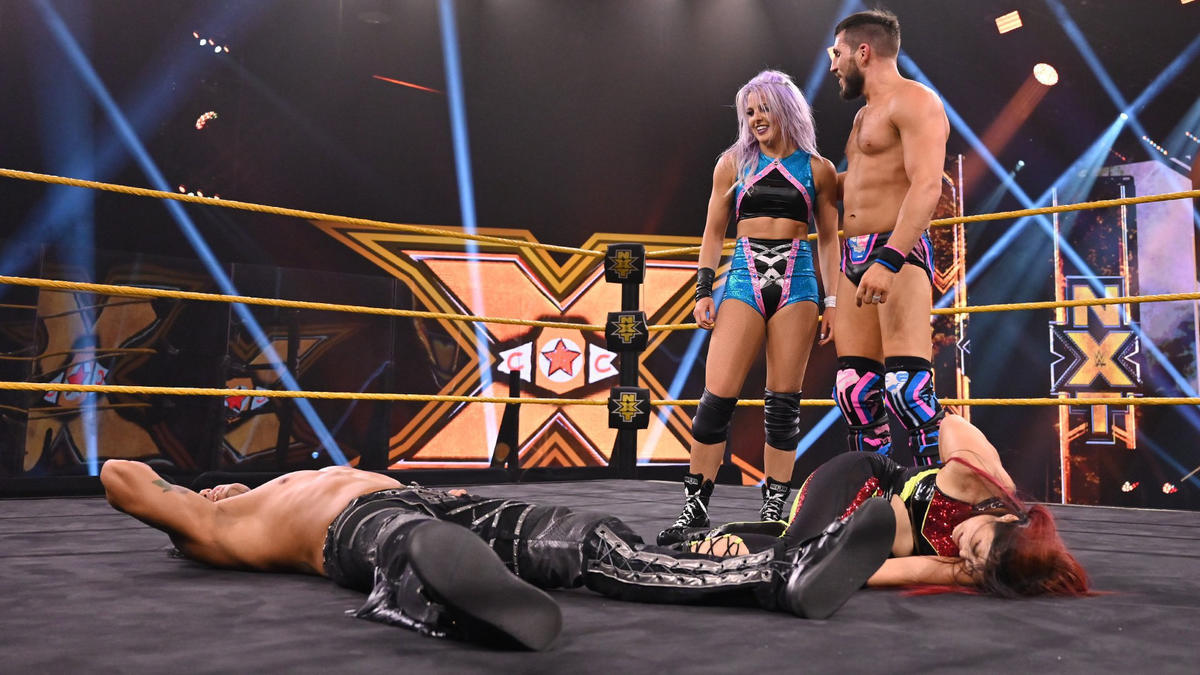 Both Candice and Johnny have shots at gold on Sunday night, which could make them the first couple of NXT, or the worst people to get stuck sitting next to on an airplane. LeRae and Gargano are no strangers to mixed tag matches; we saw them face Keith Lee and Mia Yim earlier this year in a very fun match. NXT’s main event, against the meshed team of NA champ Damian Priest and Women’s champ Io Shirai, was arguably better than it should have been. Despite the strangeness of their team, Shirai and Priest actually worked well together, and we saw some double teams between them to take down Candice and Johnny. They had an interesting mix of styles, with Shirai’s high flying and Priest’s big man moves. Still, the power couple proved that true love wins all with a low blow from Candice to Priest, allowing Johnny to hit his DDT. The two celebrated with the titles post match, but I have a feeling it’ll be a dark day in Magic Kingdom for them come Sunday night. 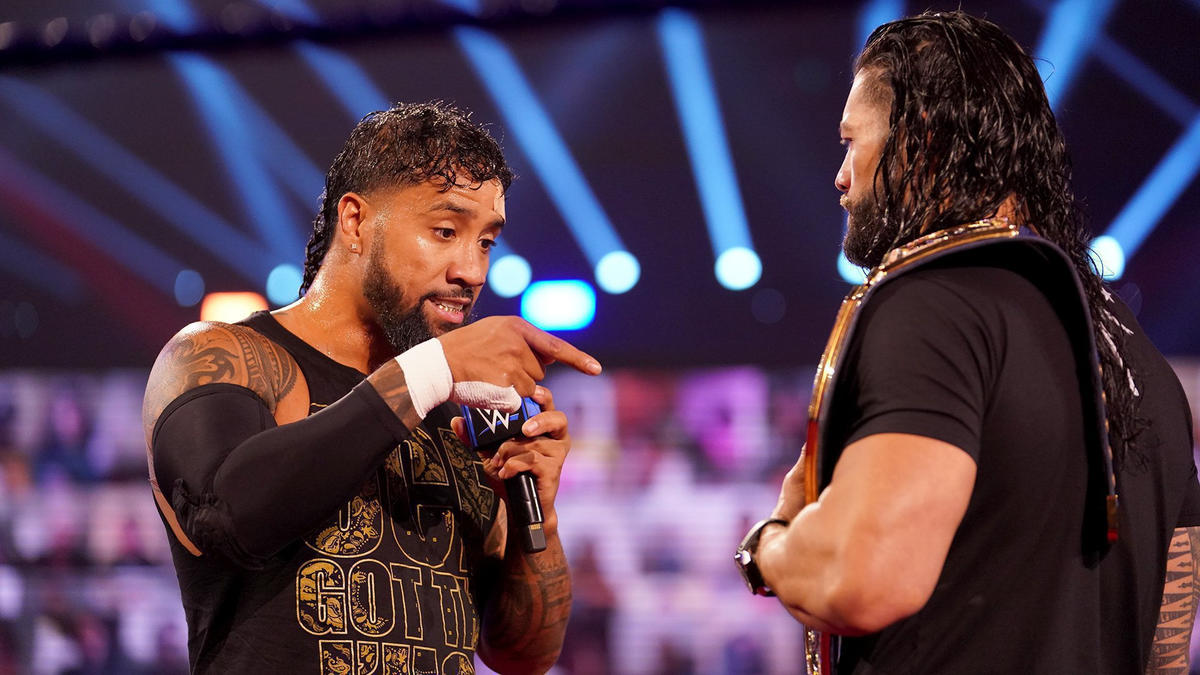 No Cousins, No Chiefs

After their very excellent match at Clash of Champions, all is not over for Jey Uso and Roman Reigns. Reigns and Heymann opened the show with a coronation to name Reigns tribal chief. However, Roman stopped the ceremony, claiming that Jey had refused to call him chief, which meant it wasn’t official yet. Uso came down and claimed that if Jimmy hadn’t forfeited for him, he would have won the match and the title, which is a nice thought, but Jey, we saw that match, man. It was rough out there. Reigns again played the big man, saying that he helped Uso by giving him this opportunity, and as such deserved to be acknowledged as the chief. Generous cousin that he is, Roman offered Jey another shot at him at Hell in a Cell, with “the highest stakes ever.” With the fact that WWE wrestlers have fought for custody of children before, I’m very curious to see how high Roman’s willing to go here. Uso accepted, and we’ll see that rematch at the end of the month, which I am very much looking forward to.

After this match was announced, AJ Styles came out to get mad that Uso was getting another title opportunity. He claimed he was more deserving of a Universal Title shot, like he didn’t just get his ass beat by a communist ska fan less than a week ago. This caused Jey to attack Styles ringside and lead to a quick match between the two. Styles fought back after his beating on the outside, but Uso was ultimately able to block the Phenomenal Forearm to land a super kick and a splash to win. More of the Uso and Roman story sounds great; both men have really been delivering in the past few weeks, and I got to see AJ Styles get kicked in the face. What more could I ask for out of a SmackDown segment? 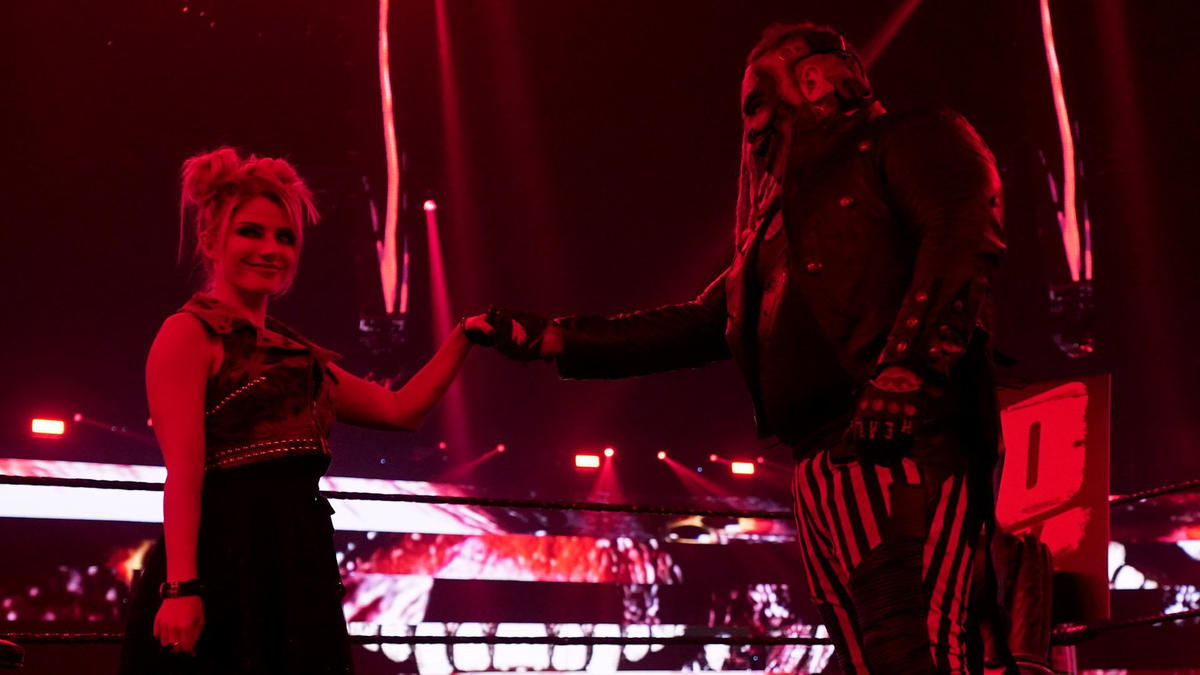 Kevin Owens hosted Alexa Bliss on his talk show to get to the bottom of her whole split personality deal. He asked her about being kidnapped by the Fiend, and if being in a union might have helped her not get forced back to work the very next day. Alexa confirmed that her brain had been washed til it was smooth, because she now believed that we should all let him in. The lights went out, and then the Fiend appeared in the ring choking Owens with the Mandible Claw. He offered Alexa a big meaty clown hand, and she took it, pronouncing them evil man and wife. This was weird but not outright bad; Bliss and Wyatt together have a lot of potential, and it’s certainly been something new for her to play the past few weeks. Owens and the Fiend will face off next week, which, again, could be fantastic, or it could be horrible. At this point, anything involving the killer clown could really go either way. 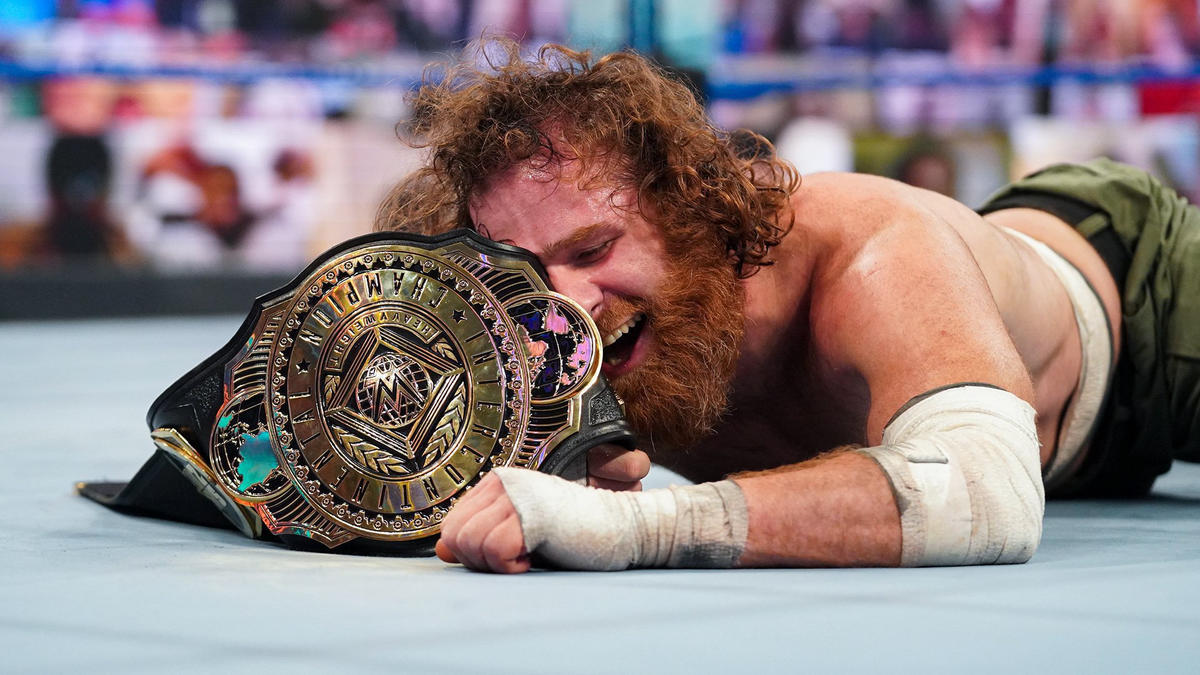 Sami Zayn is double champion of the same title, an honor that he alone deserves. Jeff Hardy had a rematch for the Intercontinental Title on Friday, looking to get some justice for getting his ear handcuffed to a ladder. Jeff went after Sami’s ribs here, injured after behind sent through a ladder by a giant Swanton Bomb on Sunday. To even the odds against Hardy’s magic knee, we discovered that Sami exposed a turnbuckle earlier during Jeff’s entrance. Hardy avoided the turnbuckle and both men ended up fighting on the outside. They went back and forth for a bit- Sami took over and hit a Blue Thunder Bomb, but still Jeff kicked out. Hardy fought back and went for a Swanton, but Sami got his knees up. He avoided Whisper in the Wind to send Hardy face first into the exposed turnbuckle and steal a win, looking very pleased with himself. This was a fine rematch following Sunday, but I’m ready for another feud for Zayn.