Oh, to have the confidence of Dolph Ziggler in 2020

Recently, I’ve realized I’ve gotten into the habit of feeling anxious during big crowd scenes on film and TV. I see characters hug at the park, and pat each other on the back, and I get so nervous for them! Do they know where their friends have been? Did they quarantine for 14 days if they recently traveled outside the state? Why are they standing so close all the time?

Watching wrestling makes that anxiety worse, only I don’t have the friendly reminder that these interactions were taped well over a year ago, when touching was cool and casual. I’m not trying to rain on anybody’s parade, but it does feel a little strange that people are risking their lives so we can watch Stephanie MacMahon inexplicably be girlboss of Raw again. Anyway, here’s the week in WWE: 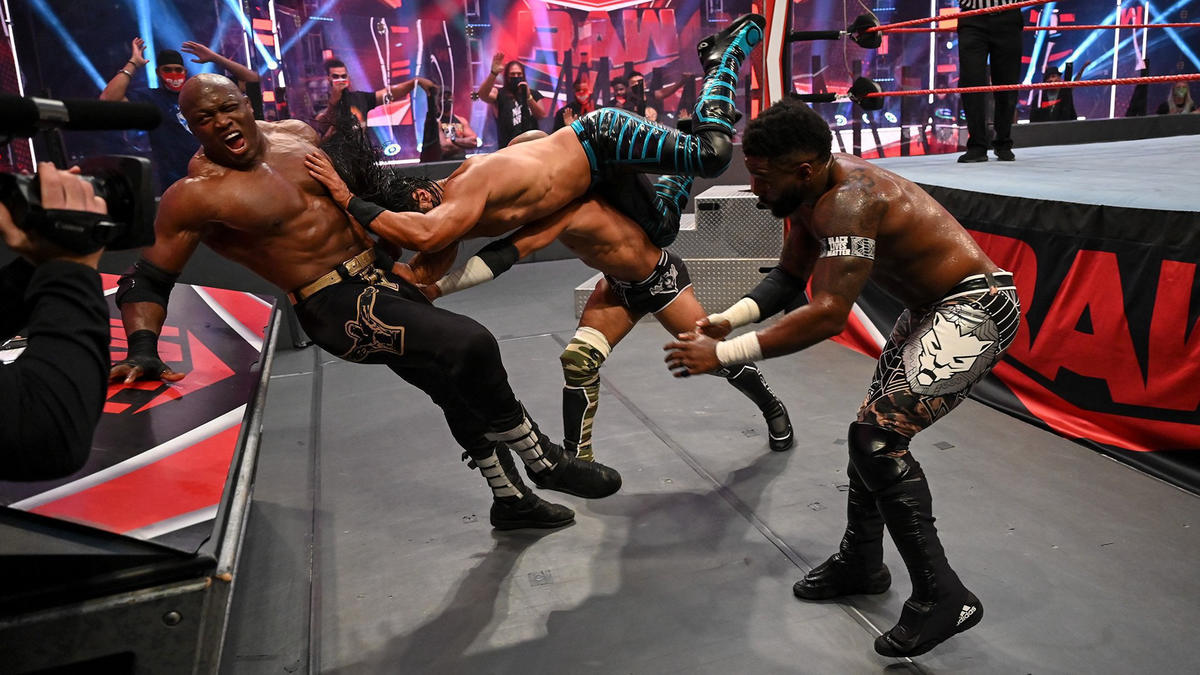 After spending the entirety of 2020 without making a single televised appearance, professional nice man Mustafa Ali finally graced our screens Monday night. Abandoning the blue brand and any potential hacker angle, Ali came out as backup for Cedric Alexander and Ricochet against MVP, Bobby Lashley, and Shelton Benjamin. With MVP’s failed attempts to recruit Alexander resulting in the thrown together team of Cedric and Ricochet, it’s great to see Ali injected to mix things up a little more. Mustafa is an incredible high flyer, and has some long history with Alexander from 205 Live. After watching his friends get the absolute crap beat out of them by Lashley and MVP, Ali finally got the tag, landing an insane suicide dive onto the heels. He hit MVP with a neck breaker and finished with a 450 to win the match for his team. I’d love to see more of Ali teaming with Alexander and Ricochet. Actually, I’d love to see more of him doing literally anything at all. 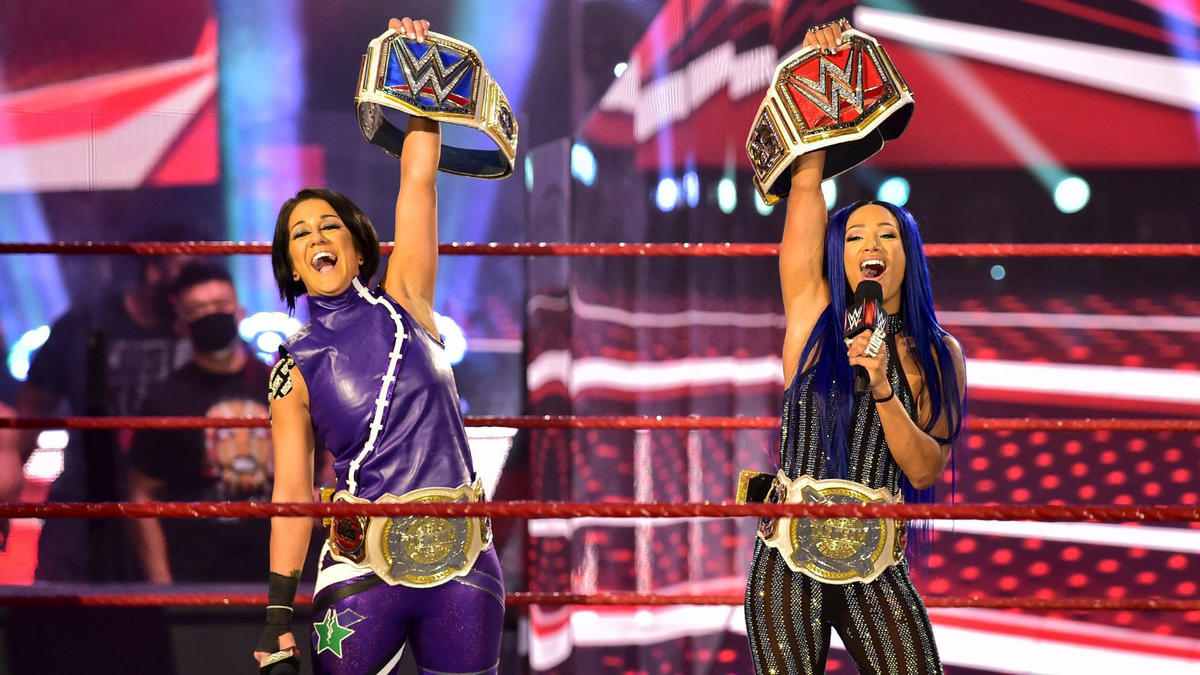 Whose Raw Women’s Championship is it Anyway?

After her controversial win over Asuka at Extreme Rules, Sasha Banks cut a promo on Monday night to explain things a little more. She alleged that since Asuka had used the mist and incapacitated the ref, Bayley was within her rights to take on his duty and his clothes, making Sasha herself the rightful champ. Asuka and Kairi Sane came out to yell at her about it, prompting the patron saint of women, Stephanie MacMahon, to make a tron appearance. I honestly can’t remember if Steph is genuinely in an authority role right now, or if they just threw her up there because we can’t have two women wrestling without her presence. Either way, she declared the ending of the match wasn’t valid, and instead, Asuka and Banks would have a rematch next week.

This lead into a fun match between Bayley and Kairi Sane; the first time we’ve seen Kairi in action since being injured last month, if I remember correctly. Sane got some great offense here, starting out hot with a bunch of chops to the dual champ. An in-Sane Elbow almost got her the win, but Bayley got her foot on the ropes. The SmackDown champion hit a suplex and went for the Bayley to Belly, but Sane escaped into a roll up, scoring a surprising win. A PPV match between these two would have been great, although that dream sounds unlikely, as it seems Sane’s time with WWE is likely to be finished. 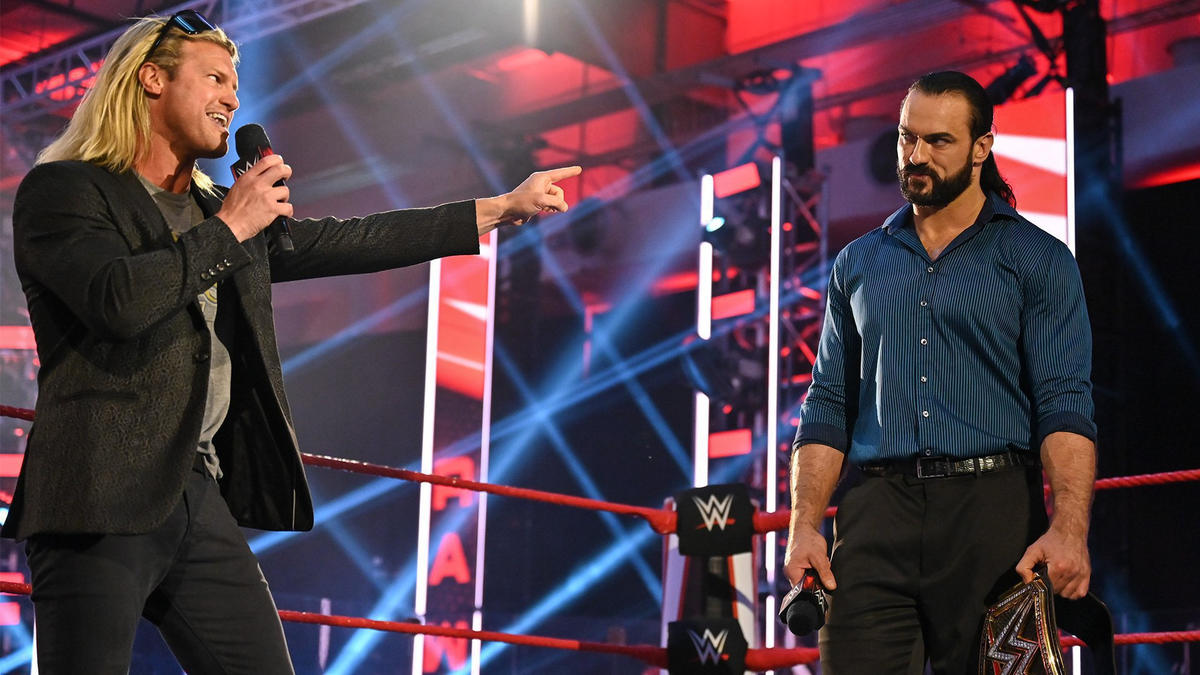 I know I rag on stand-up comedian Dolph Ziggler a lot, but I really do think the man is very good in his role. He’s an obnoxious villain with uncooked Oodles of Noodles hair; what’s not to hate? Unfortunately, his current role in the company seems to be that of a man who is completely unbelievable as a challenger to anyone’s title. After losing a feud to Otis, as well as coming up short against McIntyre in a match he himself designed, Dolph seems determined to continue his losing ways, as he challenged Drew to a rematch on Raw. McIntyre first refused, which seems fair- he did beat Ziggler clean, even with the stipulation. But even a head butt didn’t deter the show stealer, who offered McIntyre the chance to pick his own stipulation for his match. Is Dolph a masochist now? Like, is this a subtle gimmick change, where he just wants Drew to beat the shit out of him on pre-taped television? McIntyre agreed, and I guess that’ll happen again now, even though the majority of the Raw men’s roster has more wins in 2020 than Dolph Ziggler. That’s not to say their match at Extreme Rules was bad; it was a lot of fun, and the two work very well together. It’s just that if I’m already suspending disbelief that 15 NXT rookies in face masks can make the crowd noise of a packed arena, I can’t also buy into the idea that Ziggler might become WWE champion. You gotta pick your battles. 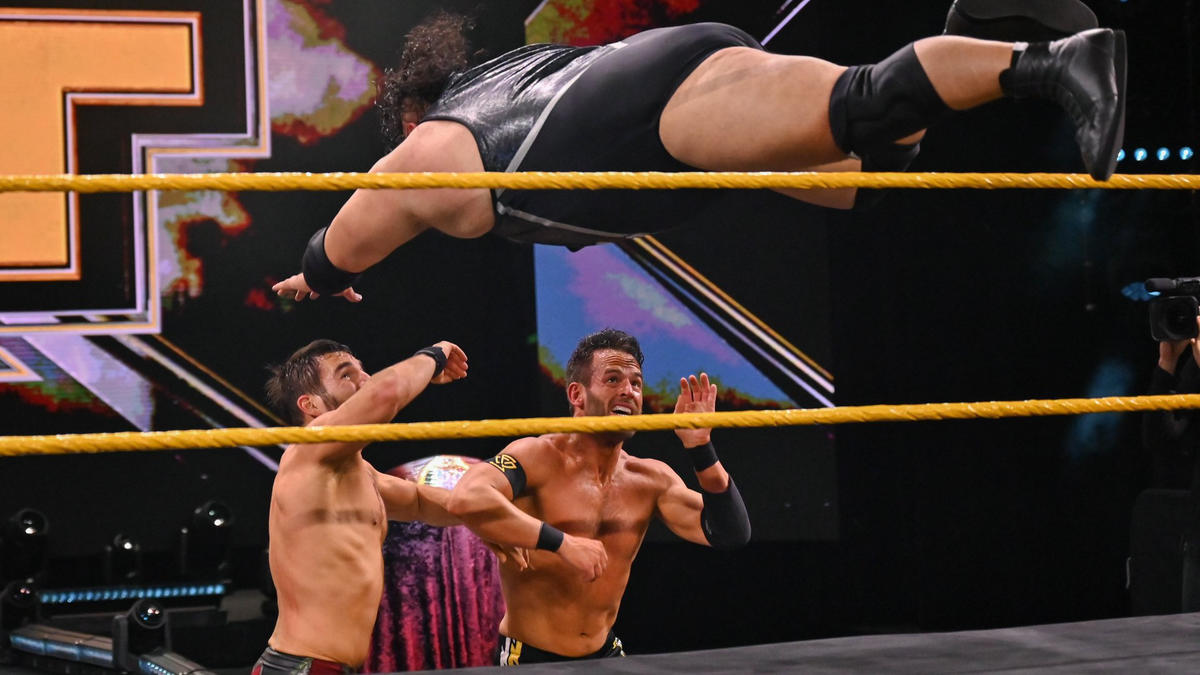 Keith Lee became NXT’s first dual singles champ when he beat Adam Cole in a great match from two weeks ago that you definitely watched. Of course, because we aren’t allowed to genuinely enjoy our time on this earth, NXT had Lee relinquish the North American title this week, with William Regal announcing a short tournament to determine a new champ. This feels lame on a couple levels; one, we got all of one full week to see Lee as double champion, and two, we don’t even get a storyline out of it. Had they built Lee’s apprehension over holding both titles a little more, having him realize he doesn’t want to have a stranglehold over the division, this would have felt more like a character choice, rather than NXT hastily realizing the NA title could also be worth a storyline or two.

Regal’s announcement lead into our first triple threat of the two week tournament, featuring Bronson Reed, Johnny Gargano, and Roderick Strong. This was a great match that really worked as a showcase for Reed in particular. Gargano and Strong had to work together to take out the thick legend, which lead to Johnny turning on his temporary ally. You know how he likes to do it. Gargano hit Strong with his draping DDT, but Reed ran in and landed a splash on Roddy to pick up the win. A surprising ending that gives Reed a lot of momentum going into the ladder match for the NA title. 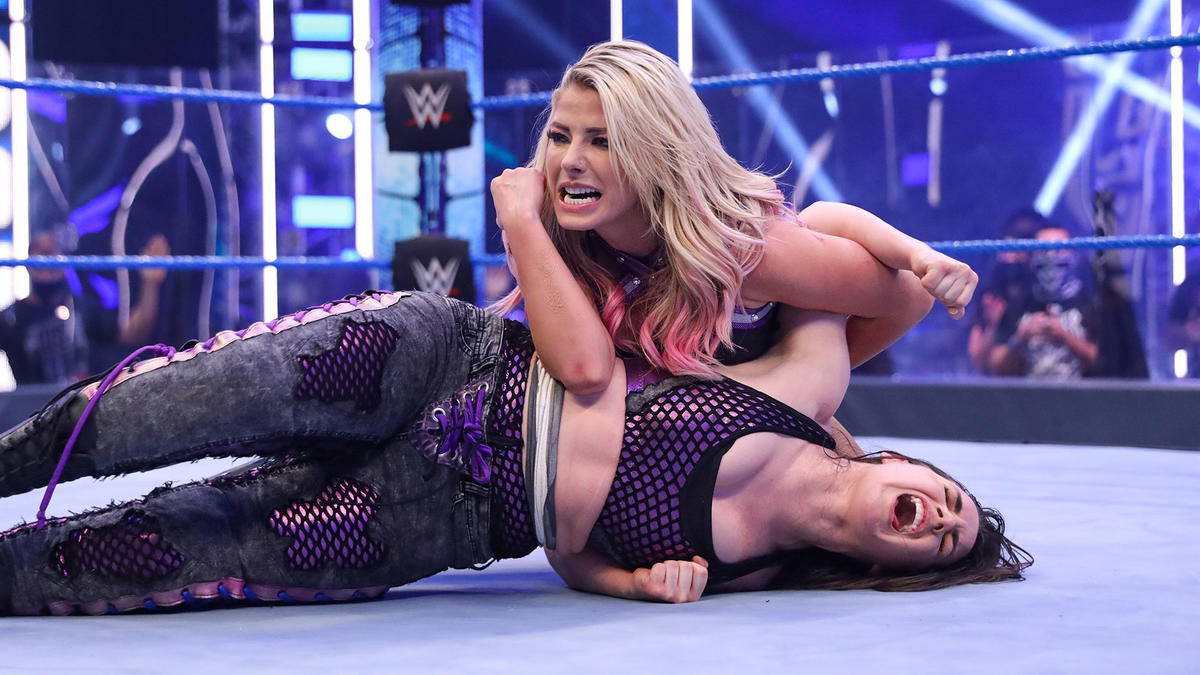 Bayley and Sasha kicked things off with a celebration of all things them. The dual belts team alleged that they were the new definition of greatness, but were interrupted by an angry Nikki Cross. Cross demanded another shot at the SD title, which Bayley agreed to- but only if she could beat her opponent tonight. Bayley picked Nikki’s bff Alexa Bliss to face her, declaring that whoever won this match would get a title opportunity. Alexa was hesitant, but Nikki shoved her to the ground and insisted they risk a year long friendship for a match Bayley is going to cheat to win. Regardless, was a good match that really felt it could go either way, but the real star here was Bayley and Sasha on commentary. They cackled and sneered and challenged Michael Cole to a SummerSlam match, and it was awesome. Corey is shaking at the idea of fun heel commentary. Despite some tough offense from Bliss, Nikki won when she faked Alexa and the ref out with an injury to her ribs, using the opportunity to roll up Bliss for the win. A really fun match that gives Cross the spotlight and allows for some future tension between her and Bliss. 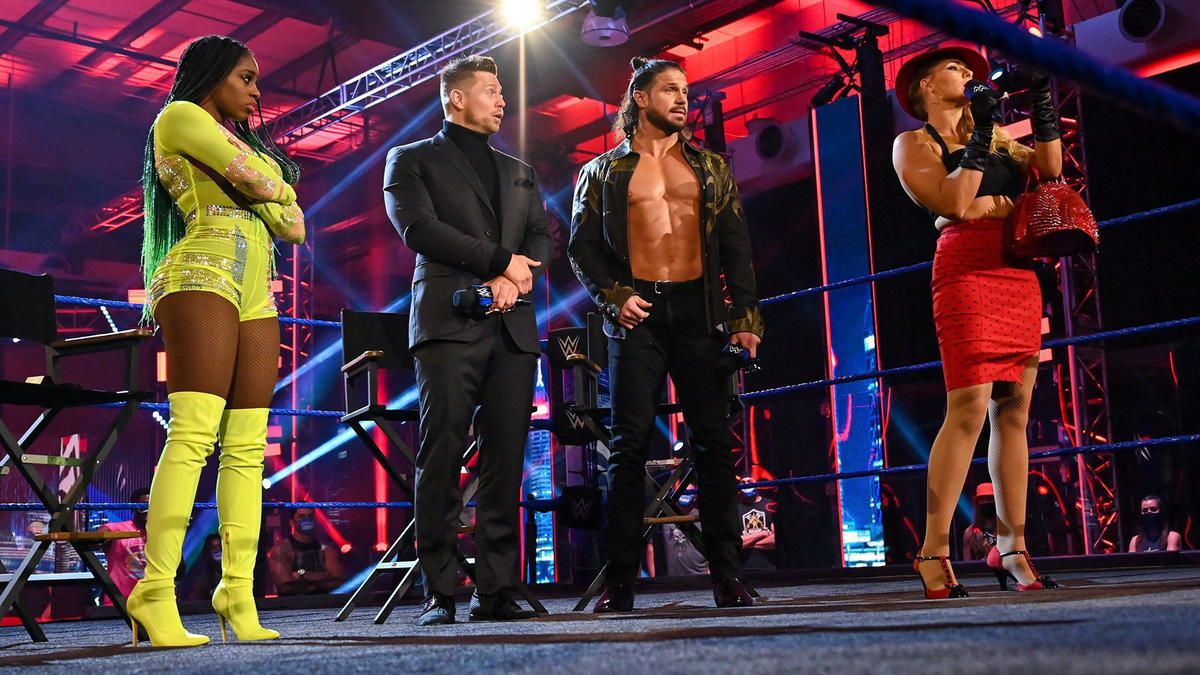 After Naomi was trending on Twitter last weekend, WWE did what they do best, and failed to really capitalize on her authentic momentum. In an awkward Miz TV segment, Miz and Morrison asked Naomi why she deserved to trend after losing to Lacey. Now, I get it; Miz and Morrison are heels, they get to ask the dumb questions, and Naomi gets to look at them like she’s about to slap some sense into those fiveheads. But using the opportunity to bring in Lacey, even just to receive a beatdown from Naomi, felt like it took away from her moment. It just felt so obvious that the writers wanted to use Naomi’s popularity on social media, but frankly didn’t know how to do that just by letting her be herself and, I don’t know, maybe win a wrestling match. Lacey retreated with a bad lipstick job, while Naomi made neon green and rose red work in an outfit. I guess we’ll see a longer feud between them now, but given this company’s track record with ignoring talent who get themselves over organically, I just can’t trust them to do right by Naomi here. 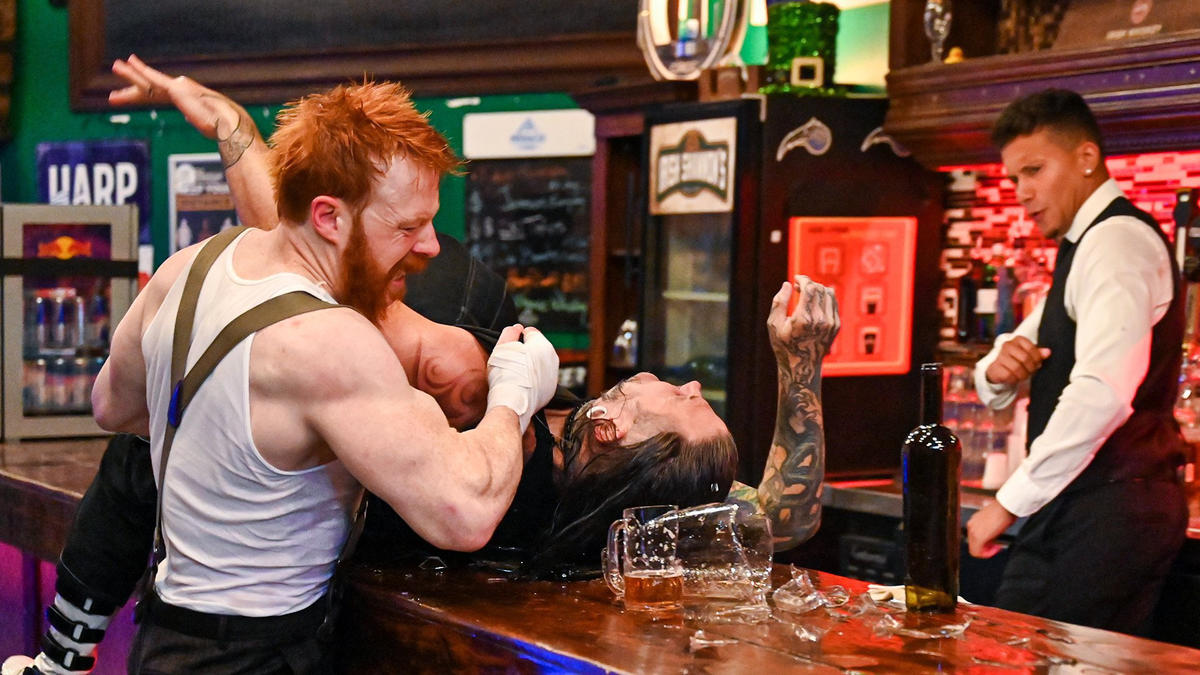 Finally, the long awaited bar fight has arrived, and a local Orlando bar saw the most action it’s had in months. This started with both men claiming to be so in tune with the establishment that they were the bar itself; a statement I’m sure the bartender has heard before on a Saturday night. We got Ten Beats of the Bodhran on the edge of the bar top, which left Jeff on the floor and Sheamus undoing his suspenders. Why was he dressed like he’s starring in Chicago anyway? Jeff hit a dive off the bar onto Sheamus, and the two fought to the bathroom. Sheamus shoved Jeff’s face in the urinal and turned on the spout. Having worked in an Irish bar, I’m gonna guess how many times a day that bad boy is cleaned, and it’s definitely the scariest spot I’ve seen a wrestler take in some time. They made it back to the main area, and Jeff found a ladder that someone had conveniently left nearby. I guess they were doing some construction. He got knocked down by Sheamus’ goon and then took a ladder to the back, which left him probably dead on the floor. Sheamus went to have a quick pint and then returned to pin Jeff, only to find that he had entered full face paint and white eyes mode. Hardy knocked Sheamus to the ground and ascended the ladder to hit a Swanton bomb and win. Godspeed to the end of this feud, and to whoever has to clean up all that debris in the bar. 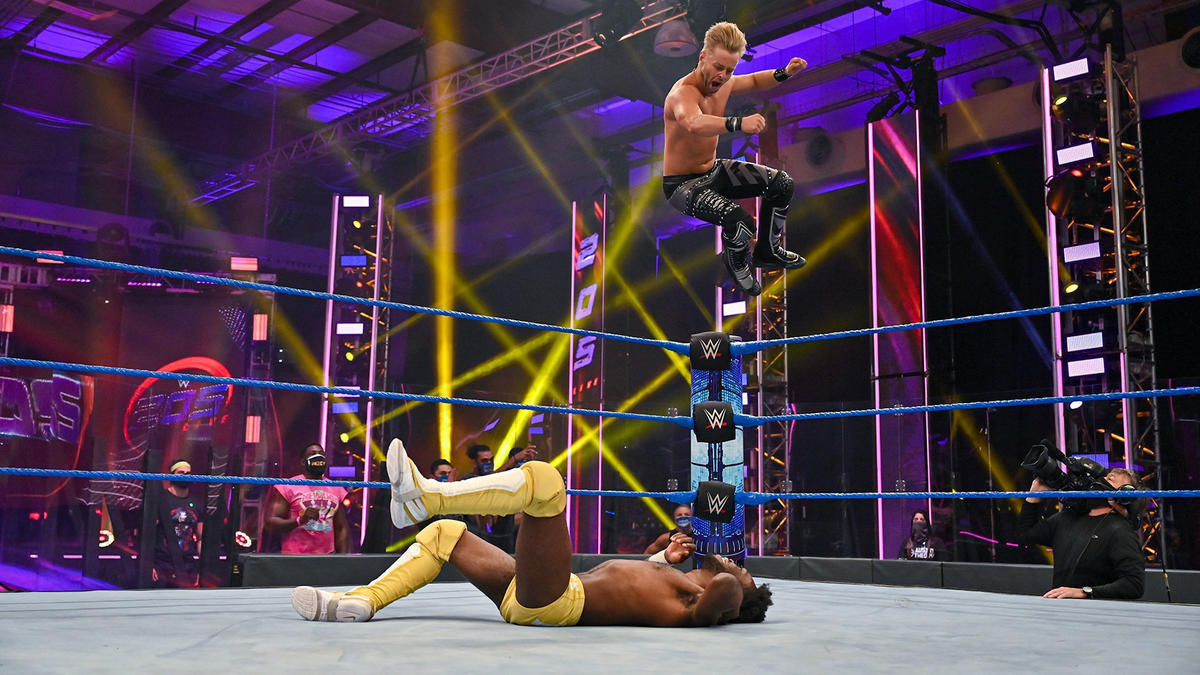 Drew Gulak seems to be a semi-permanent part of the 205 Live commentary booth, which is definitely a step up from the Catch Point reunion SmackDown seemed to want a few weeks ago. For one, Malcolm Bivens owns Catch Point, so let’s not even go there without him. Gulak and Vic Joseph covered Drake Maverick’s return to 205, where he faced Leon Ruff, who deserves everything good in the world, in my personal opinion. Ruff hit Maverick with a hard elbow and played on his injured shoulder early on, but the former GM battled back. After a sunset bomb into the turnbuckles, Maverick manged to land an elbow drop from the top to win the match. Maverick’s comeback story is still ongoing, and I’m sure we’ll see him get another crack at Cruiserweight Champion Escobar soon.