With a fancy new arena and the best virtual fans in the world, WWE rolled towards Hell in a Cell. Raw finally gave Retribution something that might pique interest, while SmackDown gave us the first night of this year’s draft. As always, we were left with the good, the bad, and the very questionable decisions. 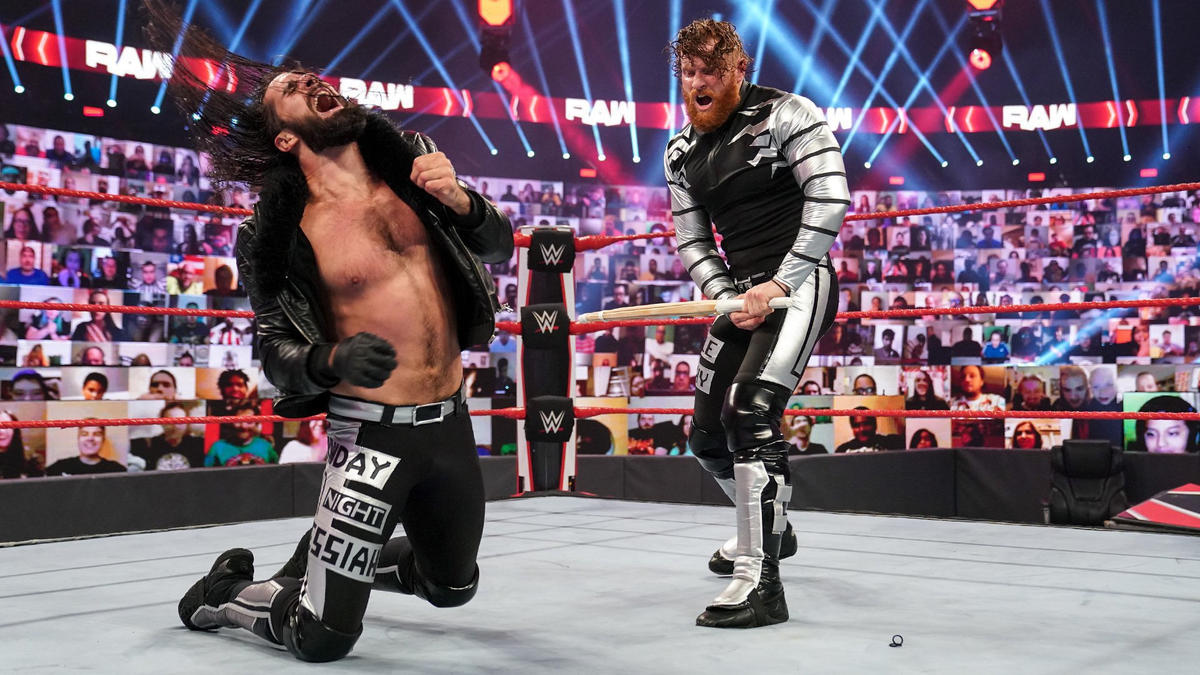 Betrayal Is Easy to Do

After weeks of being beaten up by a man who only owns one glove, Murphy has finally snapped. He and Seth Rollins won yet another tag match against Humberto Carrillo and Dominik Mysterio, with Murphy getting the pin this time. This victory encouraged Murphy to see his own worth outside of being Seth’s beefy, silent friend. He left Rollins ringside, upset that Seth had claimed earlier that he didn’t need him, even though he was the one with the knee in Humberto’s face. Later in the night, Rollins demanded an apology from the former Buddy, and the Aussie snapped. He knocked Rollins down and dragged him out by the commentary table. The two fought around the ring, with Murphy finding a kendo stick and whacking the hipster beard off of Rollins. He wanted Seth to apologize to Aalyah, probably for making Thanksgiving super awkward by insinuating her dad isn’t her real dad. Rollins eventually gave in, but it was only a ruse to go after the disciple. He laid Murphy out with the kendo stick and went for a chair, but Aalyah and the Mysterios ran out to stop him. Rollins left up the ramp, and Dominik and Rey told Aalyah to beat it too. Rollins and Murphy one on one should be a great match, but I’m really not sure what to think of the Murphy/Aalyah angle. Other than I just can’t buy that a teenager would say more than five words to her dad’s coworkers. It’s simply not realistic. 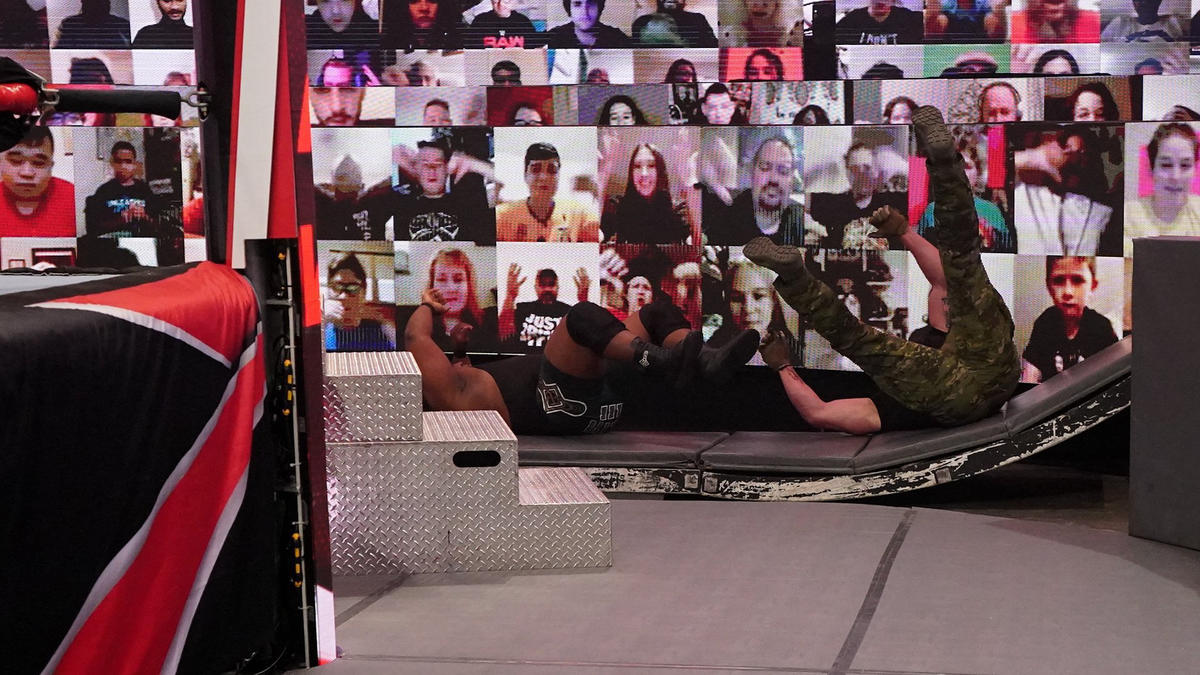 Raw Underground has kind of disappeared, but like the middle child on a Christmas vacation, nobody is all that concerned about it. As the Fight Club knockoffs only stan, Braun Strowman and his perfectly egg shaped head demanded a match Monday night to make up for the lack of basement brawling. Adam Pearce agreed to an unsanctioned match, which I guess makes it sanctioned, if Strowman could find an opponent. Keith Lee volunteered himself to save this from being a complete bathroom break. Lee and Strowman is a big boys dream match, but I feel bad Braun has lost so much momentum in the past few months. He seems a far cry from the guy who won the Universal Title at mania. Strowman and Lee knocked each other around to the outside, and ended up with a fairly quick double count out. The fought on the outside some more anyway, and it ended with Lee pushing them both off the ramp and destroying yet another announce table. This wasn’t really anything of substance, but it was actually a better use for Strowman than his underground matches. At least here I could see what was happening. A proper match between Lee and Strowman should be fun. 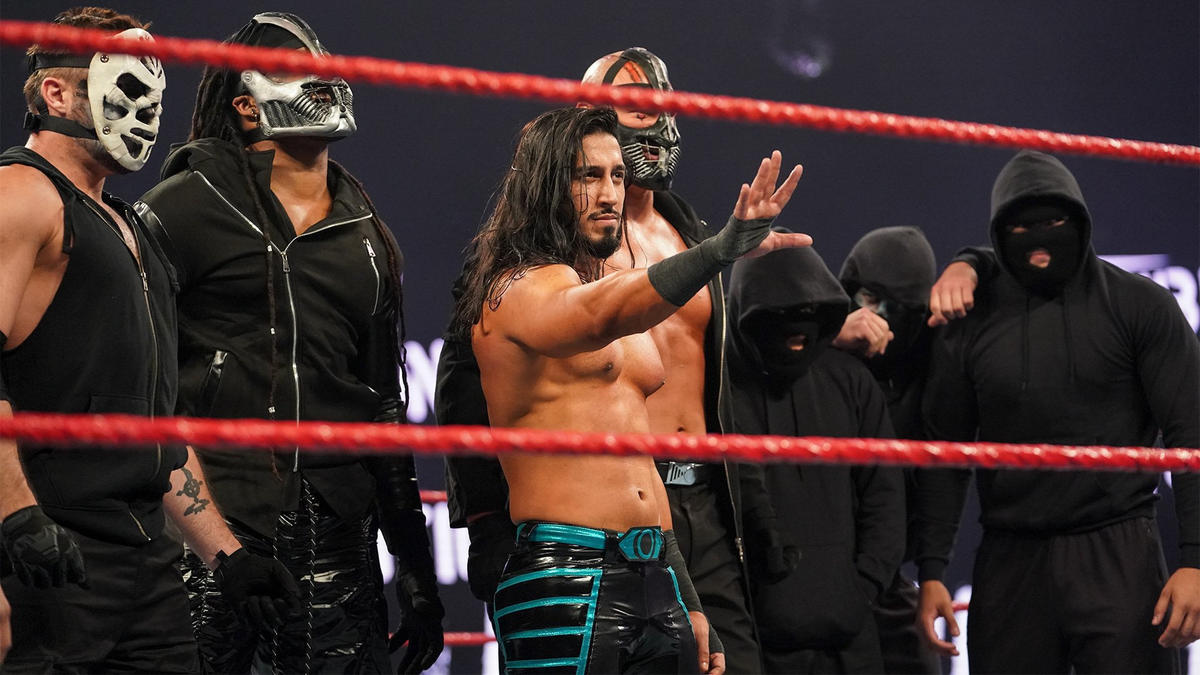 Mustafa Ali has succeeded in his wrestling career by being insanely patient with twitter trolls off screen, and being a generally nice dude on screen. Known for his “chase the light” mantra, Ali is a consummate babyface, and he plays the role very well. This Monday, he decided to shake things up just a little when he revealed himself as the leader of your high school’s saddest gang, Retribution. On Raw, Ali wanted a match with MVP, and he asked the most valuable suit owner on the roster to make sure the rest of The Hurt Business was out there backing him up. The match was cut short when Retribution intervened with their trademark light flickering, before invading ringside. Ali pretended to stand with The Hurt Business against the group, before leaving the ring and telling Mace and T-Bar to get after it. They wiped out MVP, Lashley, and Benjamin before standing tall alongside Ali in the ring. I don’t… hate this? Turning Ali heel is unexpected, but his goals align with Retribution; he’s also been looked over on the main roster for far too long. Giving him a faction to lead and a real presence on Raw or SmackDown could be great. It’s also interesting that Ali’s longtime friend Cedric Alexander, who recently turned heel himself, wasn’t present for The Hurt Business beatdown. 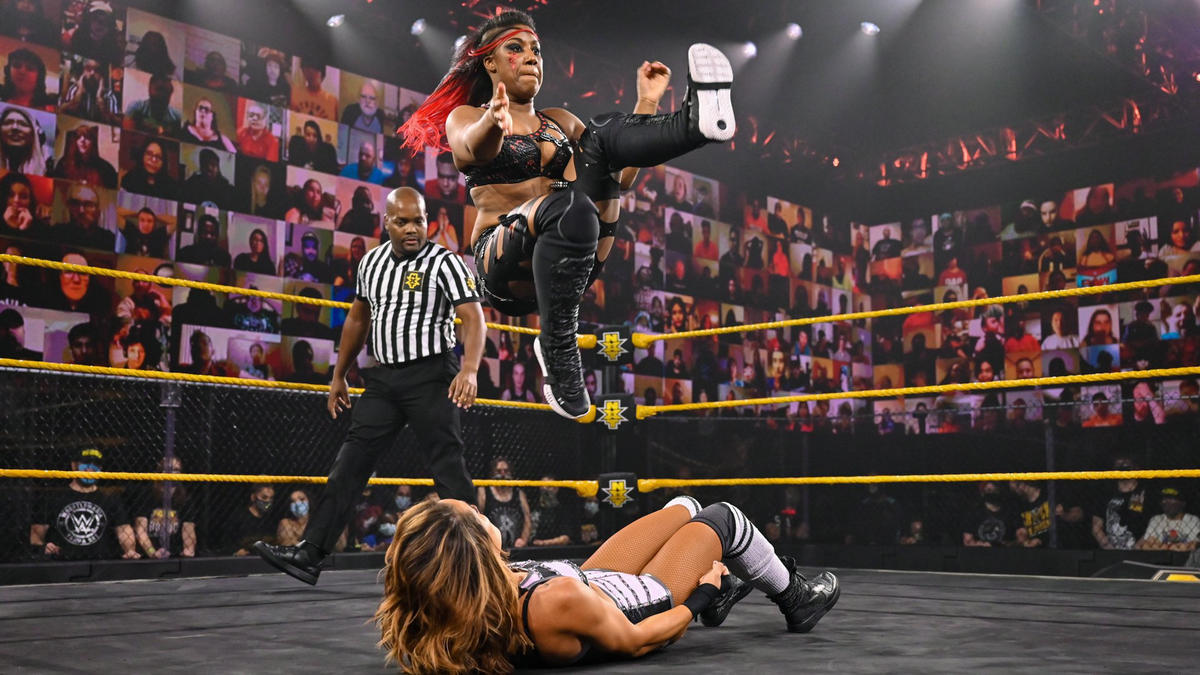 Ember Moon is back in NXT, which is huge news for anyone who likes to see her wrestle (re: everybody). While she was never given the spotlight she deserves on the main roster, sending her back to the black and gold brand could be a great move. This week she teamed with another former women’s champ in Rhea Ripely to take on Dakota Kai and Raquel Gonzalez, after the two attacked Ripley earlier in the might. I’m still not the biggest fan of Kai and Gonzalez as a team, but they worked well as the heels here. Ember was the star, coming out of the gate hot and taking out the other women. When Ripley tagged in, Kai isolated her and she and Gonzalez worked her over in their corner. After a beat down, Rhea still kicked out of a pin and Ember got the hot tag. She hit Kai with a powerbomb, followed by The Eclipse to score her first win back. This actually could have been longer in my book, but it was a nice victory for Ember. She and Ripley make a fun team. 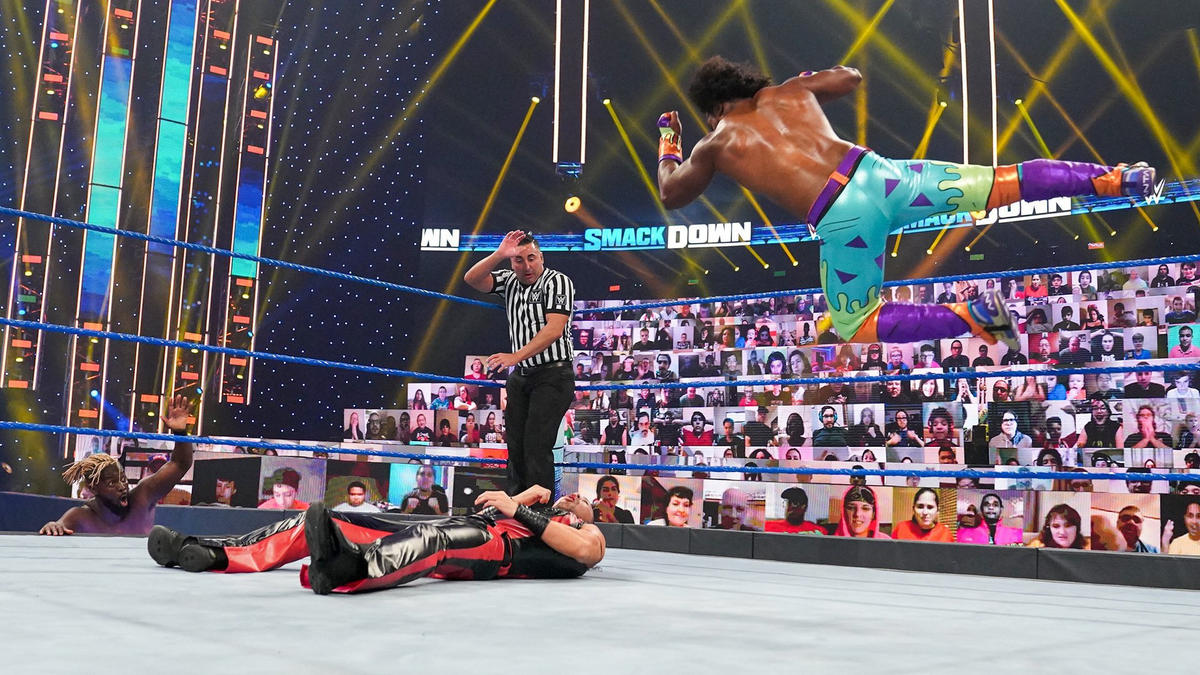 Pancake Days Are Over

You know how WWE likes to take great things and somehow turn them into stuff nobody wants to see? The New Day has managed to avoid that curse for the better part of 6 years. Over the past month, we’ve seen Big E pursue a singles career while his partners were both injured. E getting a serious run on his own is great, but it certainly didn’t seem like anyone was clambering to see the group split permanently. After Big E beat the absolute crap out of Sheamus on SmackDown, landing a Big Ending off a car trunk and through a table to win, both Xavier Woods and Kofi Kingston returned to celebrate with their brother. They then competed against tag champs Cesaro and Shinsuke Nakamura to gain their seventh tag team championships. The New Day were able to avoid the swing into the Kinshasa, allowing Woods to land a big elbow drop and regain gold. The New Day is reunited, they’re champs, all is well! Just kidding, because immediately after, Big E was drafted to SmackDown, while Woods and Kingston were announced for Raw. Splitting up one of the longest running groups in WWE right now hurts a little extra knowing how supportive Woods and Kingston have been of Big E going out on his own. We could have easily had Big E going for the Universal title with The New Day backing him up, but why give us something nice when we could have draft drama. 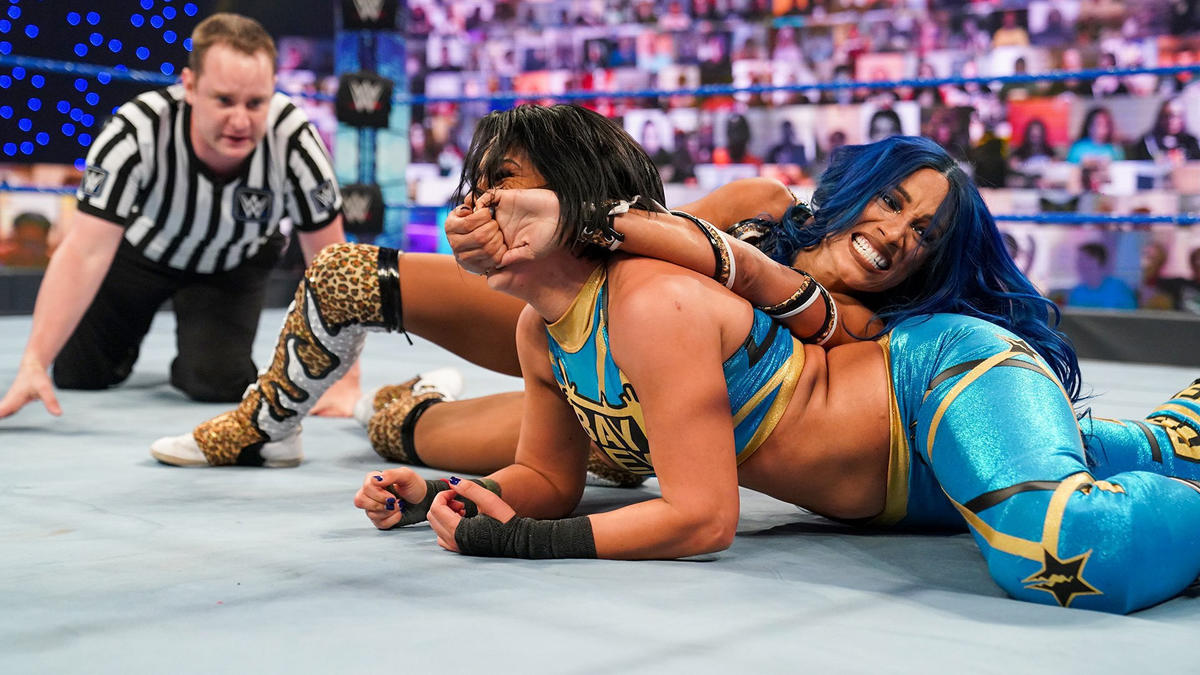 No love lost between the former Golden Role Models, as we got a fired up Banks taking it to Bayley in this championship match. Bayley tried to retreat early on, but Banks pulled her back to the ring catch some more of those boss hands. Bayley went after Sasha’s neck, hitting her with a clothesline. The champion decided to quit while she was ahead, and grabbed a steel chair to use on her old best friend. Sasha won by DQ, allowing Bayley to keep her title. Banks fought back, using the chair herself to lay Bayley out in the ring. She tried to bust Bayley’s neck in the same move she had suffered weeks ago, but the champ managed to escape. We then found out the two would go at it again in Hell in a Cell- a match I’m really looking forward to. Last years cell match between Banks and Becky Lynch was fantastic, and given the history between these two, I can’t wait to see them literally attempt murder inside that cage. 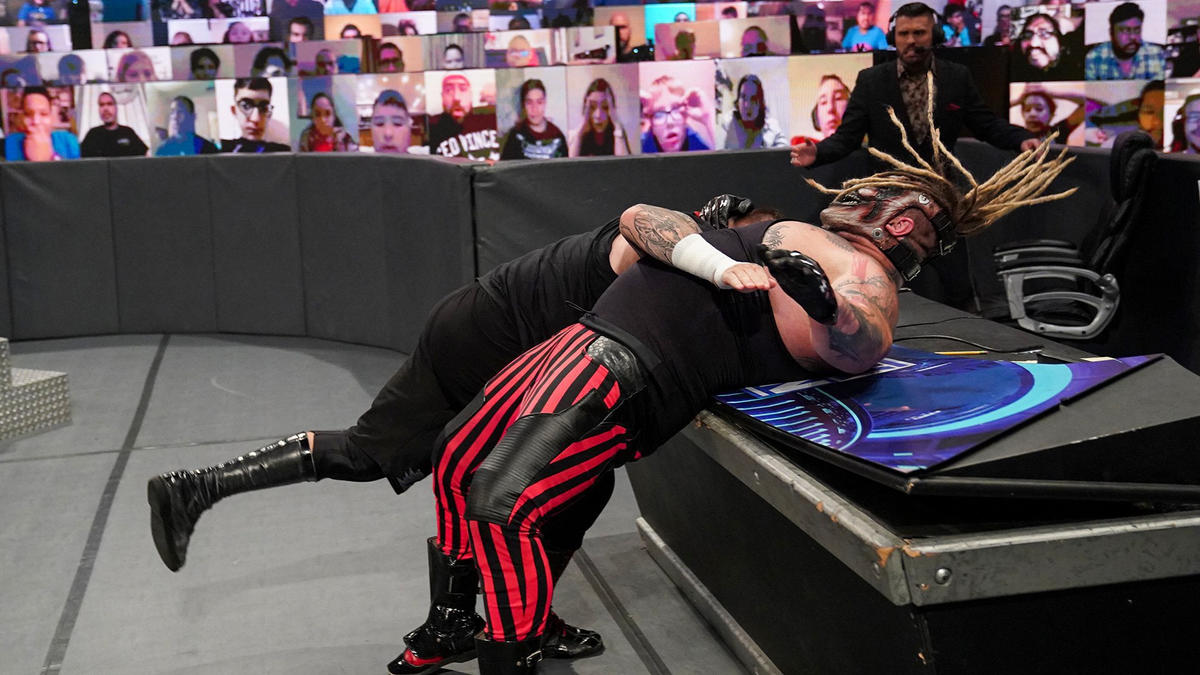 SmackDown’s main event was Kevin Owens vs The Fiend, which feels like one of the first times we’ve see The Fiend compete in a match outside of a pay per view. We’re all making pandemic sacrifices, I guess. Wyatt was in control for much of this, hitting Sister Abigail on commentary early, and following it up with the neck snapping move. Owens and his neck recovered in record time, escaping a second Sister Abigail attempt and hitting a super kick. Two more superkicks and he got Wyatt down for a cannonball. Still, The Fiend wasn’t deterred. Even a Popup Powerbomb through the table didn’t wipe him out. He hit Owens with the Mandible Claw, absorbed a stunner like it was nothing, and choked Owens with the claw to win. Alexa Bliss came out to celebrate, and the two had very loving, creepy eye contact on the ramp. 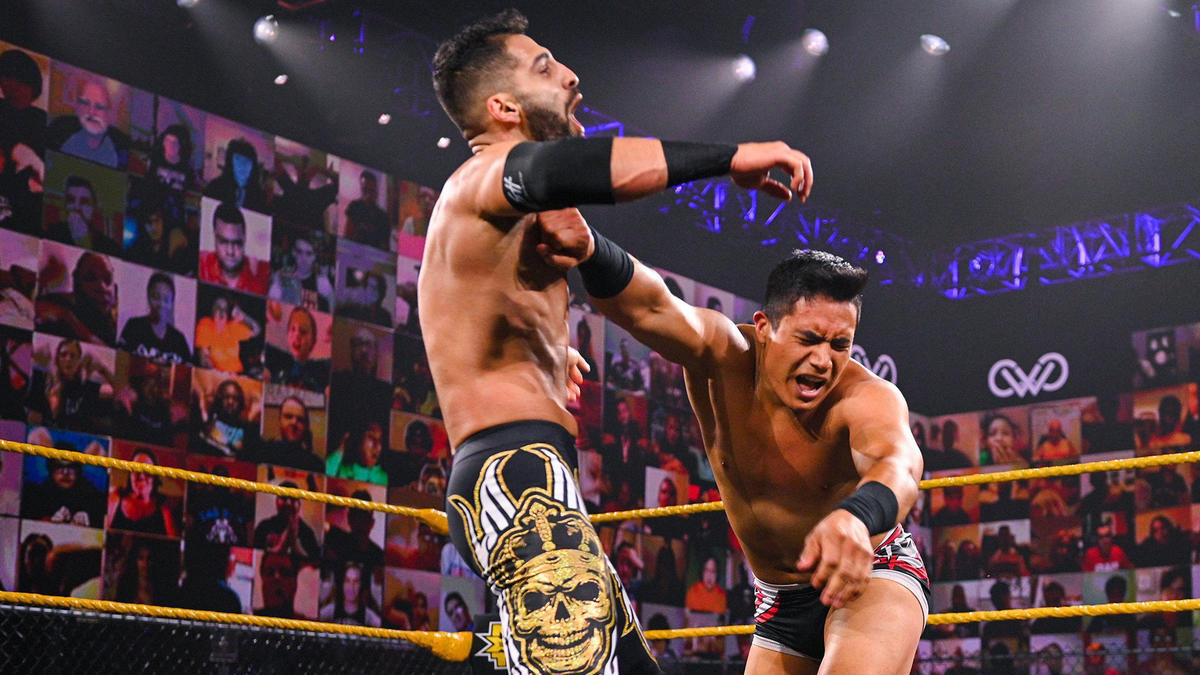 It was the 200th episode of 205 Live, a big milestone for a show WWE has done everything in their power to tank. Ariya Daivari, who has quietly become the MVP for 205 since his return this summer, took on Jake Atlas. I’m a huge fan of Atlas, who looks like a boyband member and wrestles like a video game character. They had good chemistry here, with Atlas coming out strong and tossing Daivari around ringside. The 205 vet hit Atlas with a chop to the throat to regain his momentum, then nailed him with a big DDT. Atlas kicked out and attempted a crucifix pin, but Daivari escaped. Atlas avoided the Hammerlock Lariat, but couldn’t avoid Tony Nese running in to hit a huge knee. The match ended in a DQ, and Daivari hit his lariat to send Atlas a message about trying to be the most handsome man in the room. Nese and Daivari are a good duo, and I’m sure we’ll see them messing up some more 205 newcomers in the very near future.