Gucci slip ons, good dads, and even some Gangrel (in spirit)

In case you’re spending your weekend under a rock, CM Punk was the leading news on Friday night. Personally, I wasn’t a huge fan of The Girl on the Third Floor, so I can’t say I was as psyched as others seemed to be, but I’m glad everyone had fun. Unless you’re one of the five other people who tuned in WWE over other programs I could name, here’s what you missed in Pat McAfee’s World Wrestling Entertainment. 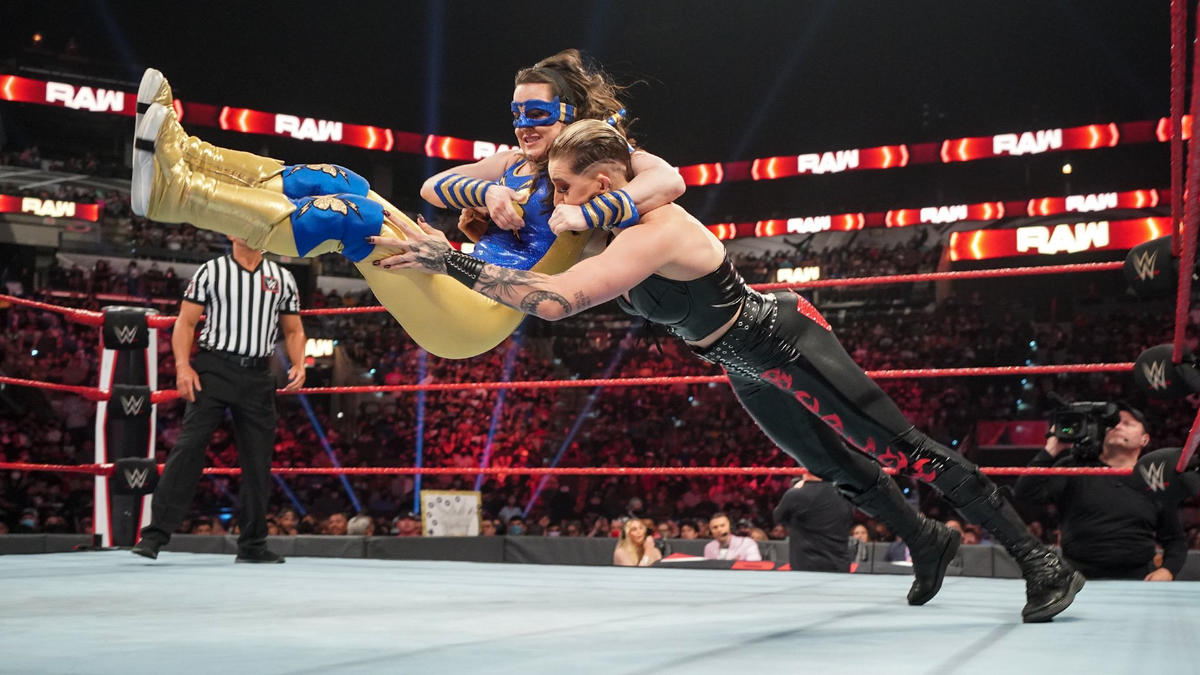 In a re-run of the past four to six weeks, we saw Rhea Ripley take on Nikki ASH, featuring Charlotte on commentary. Charlotte wanted to “observe the competition,” as if she hasn’t been interacting with exclusively these two women for a month and a half. The almost superhero got a diving crossbody to the outside, but Ripley was in control when we came back from commercial to hear everybody dunk on Byron Saxton some more. A tornado DDT rocked Rhea, and a roll up got Nikki a close count.

It was a little disjointing to hear commentary exclusively care about the Queen while Ripley and Nikki put on a fair show in the ring, but maybe they also realized this was the exact same thing we saw last week. Rhea scored the Rip Tide to get the win, and things look a little rough for Nikki at SummerSlam. Given the unfortunately lukewarm crowd reaction to the superhero gimmick, I wouldn’t be entirely surprised to see Flair score title number 15 this weekend.

Nikki must have had the same thought, going after Charlotte at ringside and tossing her inside for a double team with Ripley. It’s nice to see some grit from Nikki going into the triple threat, but it’s a bummer that despite a devotion to the gimmick, the superhero schtick hasn’t landed quite like she may have hoped. 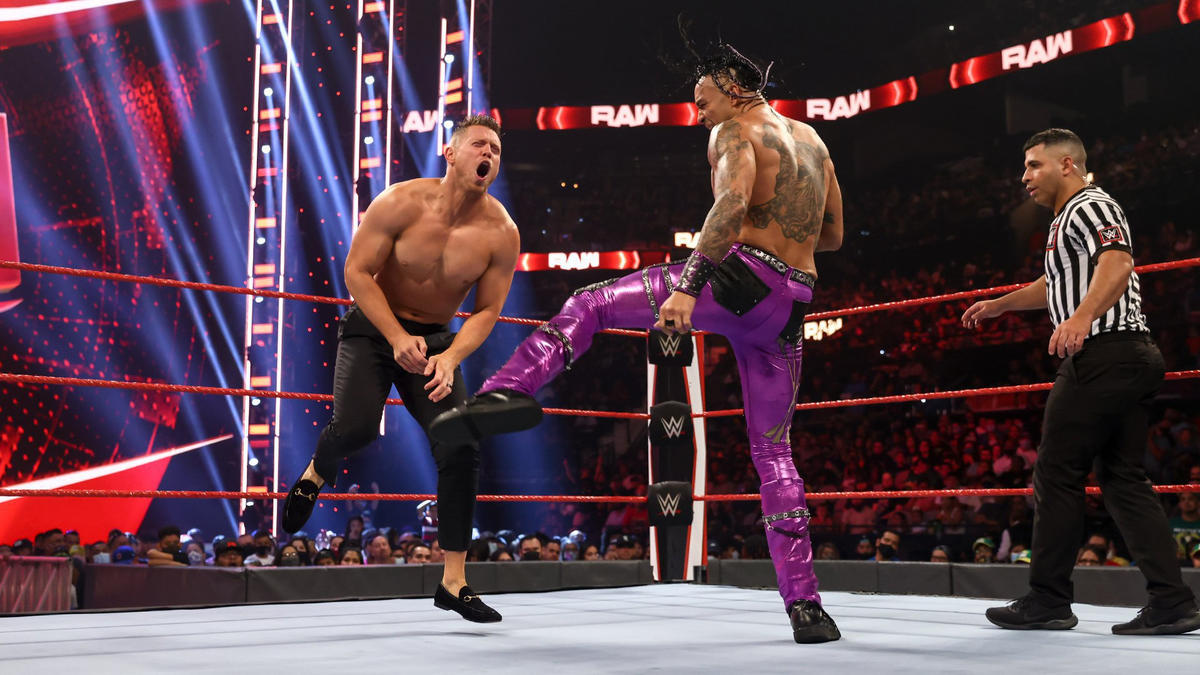 Damien Priest continued his journey towards becoming the Miz’s longest running feud this week as he interrupted a “Moist TV” segment. I’ve said it before and I’ll say it again, the JoMo’s moist bit sends me like no other. The Miz was his guest on the slippery set, here to set the record straight on how quickly his legs healed last week. Johnny asked well known famous franchise actor if he had just been going method when he made Morrison push him around in a wheelchair for three months. Priest came down in a really sweet chain vest to say he was more of a Hagen technique guy, promoted Miz to accidentally admit he was cleared to compete and walk on his own two legs weeks ago. Head booker of World Moist Entertainment Morrison then suggested Priest vs The Miz, which lead to Miz getting tipped into a baby pool full of rubber ducks.

Sheamus joined commentary to watch Priest rip the Gucci slip ons off of Miz; luckily, the fella’s nose mask was still around. It makes him look like an Incredible. Morrison kept the drip stick from Miz, hoarding the wet advantage to himself. I’m sure he realized Damien’s hair was wet enough already. Priest landed a Brogue Kick to win the match, so Sheamus hopped up on the desk to promise Father Damien an ass beating on Saturday. Sheamus and Priest should be a good match, but the prospect of Miz and Morrison splitting makes me sad. They bring out the best in each other, whether it’s being eaten alive by zombies or squirting water guns with straight faces. 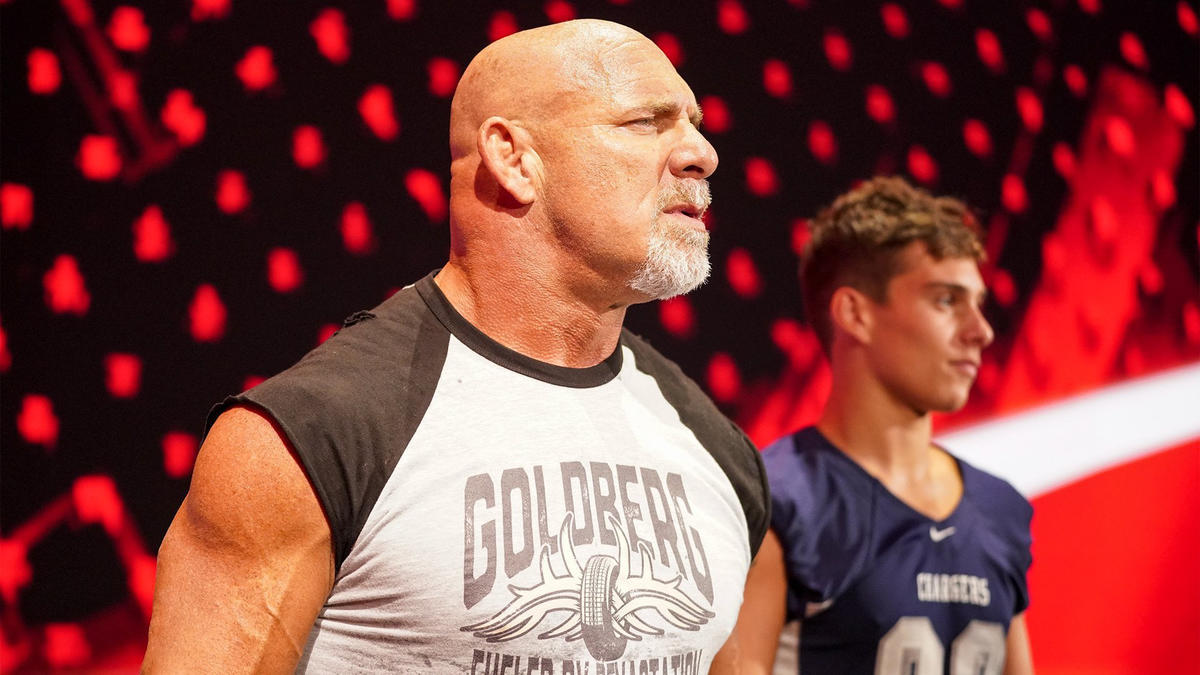 Father of the Week

Gage Goldberg has more Raw appearances at 15 than either of the Young Bucks do in their 30s, but who’s counting. Son of Bill was again ringside for Monday night’s show as his father came out to say he wasn’t going to let his son watch some hyped up promo package with footage from the early aughts. Bobby Lashley and MVP interrupted this touching family segment to claim that Goldberg was giving his son one last moment in the sun because he knew he was going to eat it on Saturday and everybody was gonna laugh about it in home room. Lashley promised that “the house always wins,” and judging by his immaculate three piece suits, he was running the house. Bill asserted this was bullshit, and such foul language prompted Lashley to jump him. Luckily, Goldberg has a decade or two of experience in making guys mad, and he was ready for this one with a spear. Goldberg and son walked off into the proverbial sunset, leaving Gage’s 8-10 friends just kind of standing ringside for nothing in particular.

This wasn’t anything groundbreaking, but neither is a Goldberg feud in 2021. I gotta hand it to MVP once again, the man can spin gold out of just about anything. 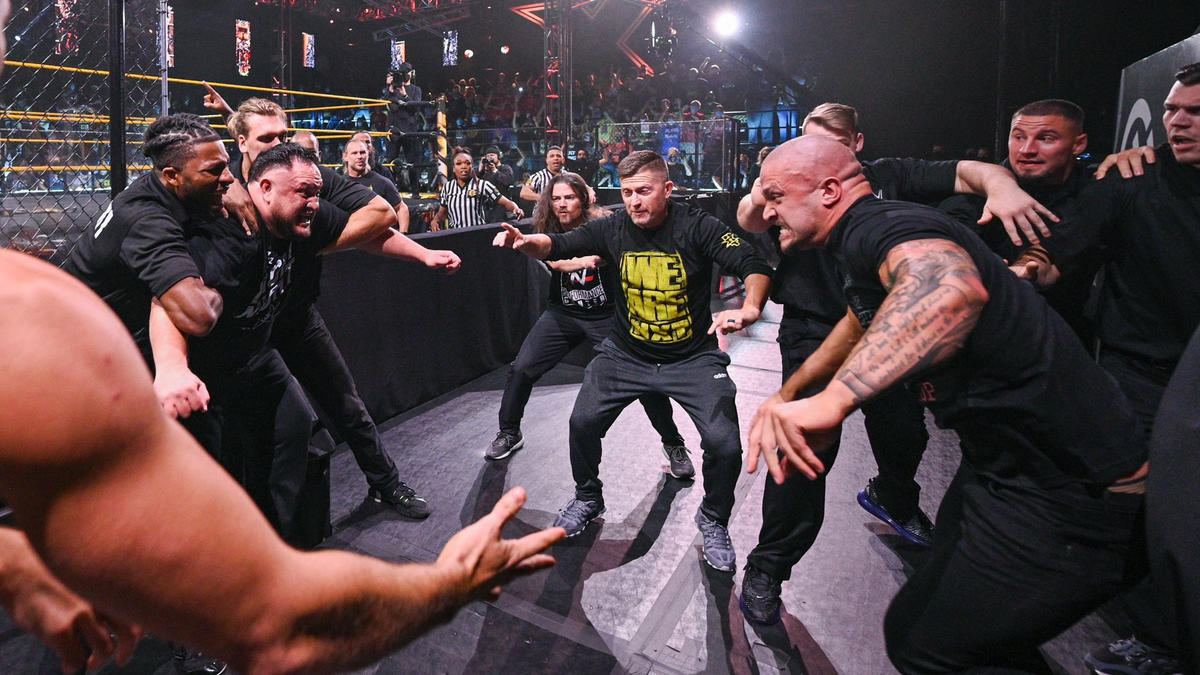 TakeOver is on a Sunday, SummerSlam is on a Saturday. What a mixed up world we live in. While NXT has been running on fumes for the better part of this year, they still have one sure fire reason to turn in: Samoa Joe. He took to the ring on Tuesday to “verbally eviscerate” Karrion Kross, while the crowd gleefully chanted for the champ’s death. Few things in WWE today are more compelling than Joe on the mic, and Kross must have felt the same. He came out with no smoke and no wife to a very muted audience reaction, then proceeded to call security down to the ring like the narc he is. Kross came into the ring to get hit with a headbutt as Joe fought off the champion and security at the same time. A dive to the outside took care of the half a dozen extras, so the Samoan submission machine bounced Kross’ shiny head off the plexiglass like a basketball. Security failed to break these two up, which is the only thing they’re hired to do, and Joe sent the clock master through the barricade. Karrion quickly returned the favor as various wrestlers who weren’t booked tonight ran down to try and stop the carnage.

Joe seems the obvious pick to win on Sunday, but given how WWE are making decisions lately, “obvious” doesn’t count for much. Kross’ main roster appearances have left a lot to be desired, with the man lacking his mystique and his manager. While even at his fog machine finest he doesn’t really do it for me, Kross without Scarlett is just another tall dude. Some lackluster Raw appearances might point towards Doomsday hanging around NXT just a little longer. 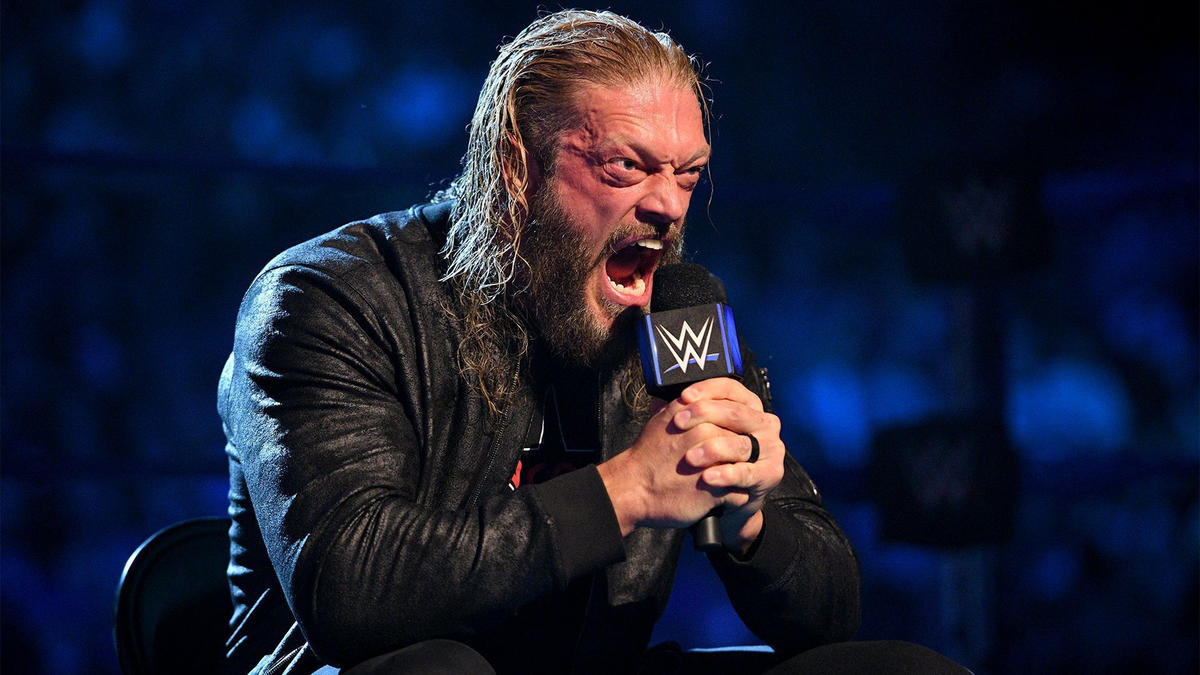 Edge started off Friday night in Phoenix by reminding us that his neck is hanging on by literal threads, and he was facing a man whose big move was crunching those head bones. The odds were rough. Rollins had made things personal when he called out his family and suggested Christian’s cameo in Haven wasn’t even needed. Edge told us Seth had made his blood run black, and that he was going to use that rage to burn down the Messiah himself. Edge is still one of the best promos in the game, and this was no exception. I’ve enjoyed his feud with Rollins; both men has charisma out the wazoo, and the only rival to Seth’s oily hair is whoever sprays down the Rated R Superstar.

Later on, Rollins responded to claims that he was a d-bag by suiting up in an all white outfit and making fun of a grown man’s neck. Seth reminded us that is was okay to fail as a father and as a wrestler. Suddenly, the arena went dark and the spooky Fiend lighting returned, as Edge appeared on the tron and shoutouted out his old friend Gangrel with a Brood bath all over Seth’s pristine suit. I can only hope we see Edge in full vamp mode tomorrow night. 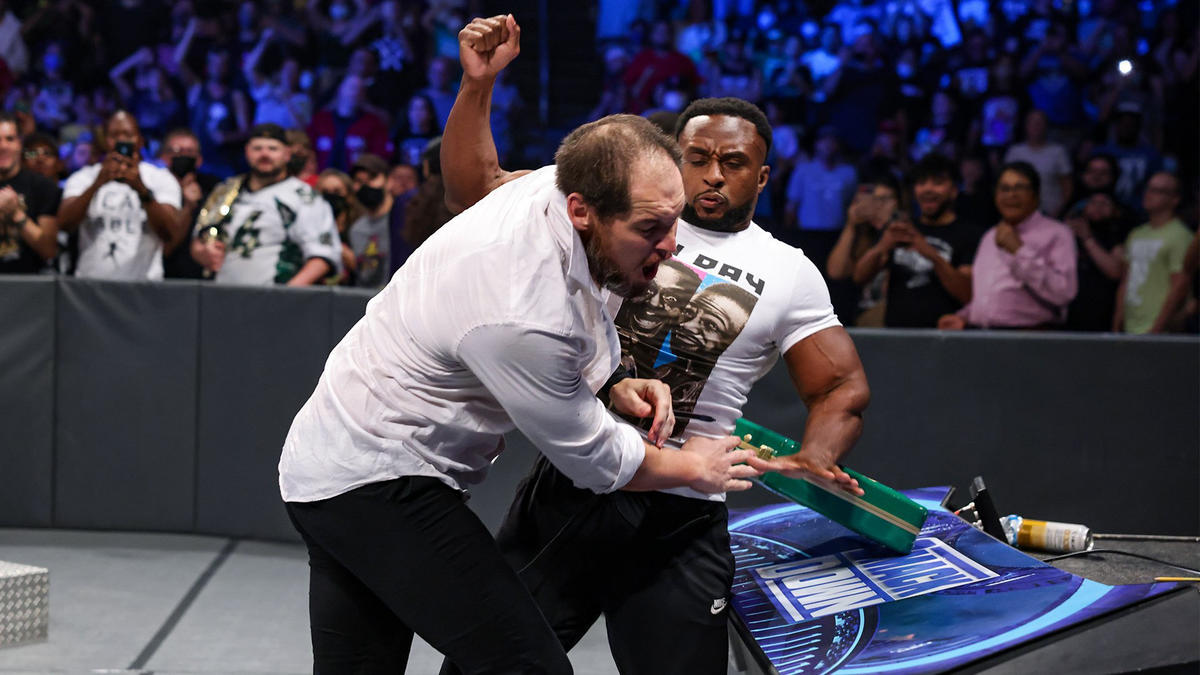 Like most of us, Baron Corbin is trying his best to relieve 2017 by stealing Big E’s Money in the Bank contract. This attempt to revive his glory days lead him again to Kevin Owens, looking “like a dumpster,” as Pat Mcafee so kindly put it. KO looked considerably better, but he also owns more than one shirt, so I’ll give him the advantage. There were no panhandling stipulations attached to this week’s match, but Corbin fought like he might get $1k anyway.

He drove Owens into the corner and bounced his sweet head off the turnbuckle. Owens got a beautiful cannonball off the apron and wanted a senton, but Corbin rolled out of the way. Big E interrupted things, causing the DQ as he tried to reclaim the briefcase. Corbin sent E into the ring post and scampered off with his new lunchbox. While I admire his attempts to redistribute wealth among the people, logistically, would stealing someone else’s contract even work if he cashed in? I guess John Cena’s set a new precedent for scratching out names on legal documents. Either way, I’d guess we’ll see Big E give Corbin something else to be sad about tomorrow night. 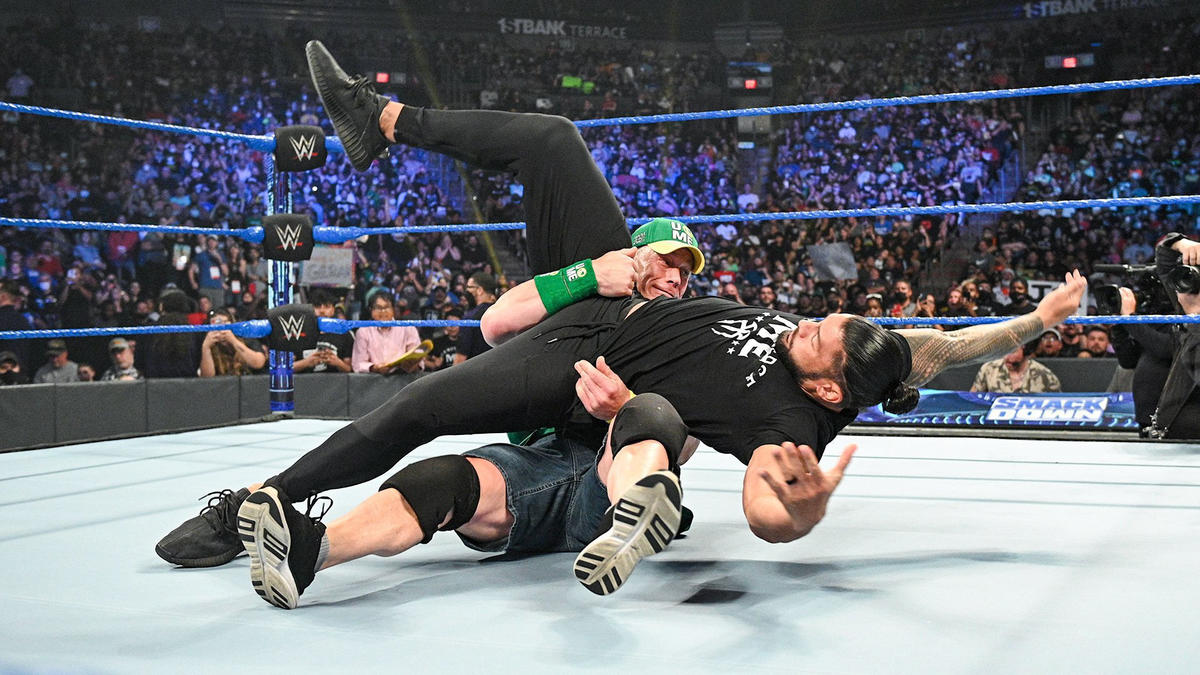 The Champ is Heated

It’s two Fast and Furious stars in one main event! Family really is forever, even on Fox Sports, much to my surprise. Reigns and Cena came face to face for the final time before 24 hours from now, and the insults were flying. Roman laughed off the assertion that Cena could pin him with some moves from SmackDown vs Raw 2007, but John wasn’t gonna have it like that. He said the title would accompany him to the set of Peacemaker the series after he demoted Roman’s shiny teeth back to the end of the line. Reigns fired back by insulting acting as a legitimate profession, which is the same argument my relatives make at Thanksgiving dinner. Roman offered some double or nothing stakes for the match; if he loses the title, he leaves WWE. The two shook on it, and Roman tried to get the jump with a Samoan Drop, but Cena slipped into a roll up for the barest of three counts. Next to Bianca and Sasha take two, this is probably the match I’m most excited for tomorrow. Roman’s excelled in this role for a year now, and there’s no one better than Cena to knock him down a peg. 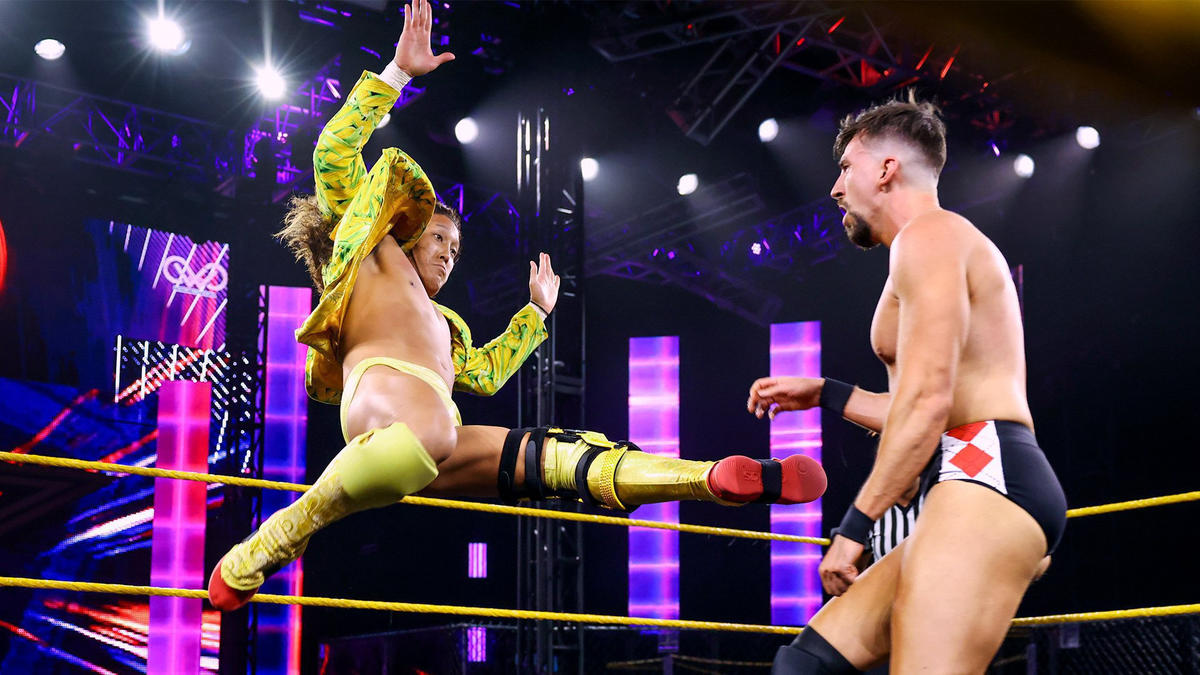 It’s hard to watch 205 Live these days. The brand still produces average-to-okay wrestling, but without the 205 or the live applying, it feels about as far from the heydays of Alexander and Murphy as you can get. This week we had two crossover matches, with Joe Gacy vs Grayson Waller and Andre Chase vs Ikemen Jiro. I can’t name a single other cruiserweight still technically in the division, so my guess is we’ll be seeing a lot of Waller and Jiro in the coming weeks. Chase and Jiro was weirdly much better than I would have expected, given the very different styles these guys have. Chase tried to use the size advantage and keep Jiro on the mat, but the Ikemen couldn’t be grounded. After almost winning with a Tiger Driver, Chase tied Jiro’s hair to the turnbuckle, but the handsome one was able to pull those luscious locks free and hit a step-up enziguri to win. This is arguably the first WWE pinfall off an enziguri in recent memory. Gacy and Waller was a solid match as well, playing up much of the same big guy/slightly smaller guy business, but this time it was Waller trying to keep things on the ground. He went for a guillotine and a sleeper, but couldn’t lock in either. A Samoan Drop almost sealed the deal, but it was a handspring lariat that won things for Gacy.