WWE rips from the headlines, and it’s as bad as you expected

It’s been a few weeks since I watched some modern wrestling. Old school WCW was fun in the same way every actor forgetting their lines in a play is fun, but at least whatever pandemic wrestling lacks in crowds, it makes up for in awareness of how important the brain is. WWE has certainly been keeping busy the past month, between laying off a bunch of employees and making hollow statements against inequality, they’ve still found time to finally come up with the great idea of using other wrestlers to make the crowd sound a little less depressing. SmackDown, Raw, and NXT had a lot of ground to cover this week, so let’s see how they did. 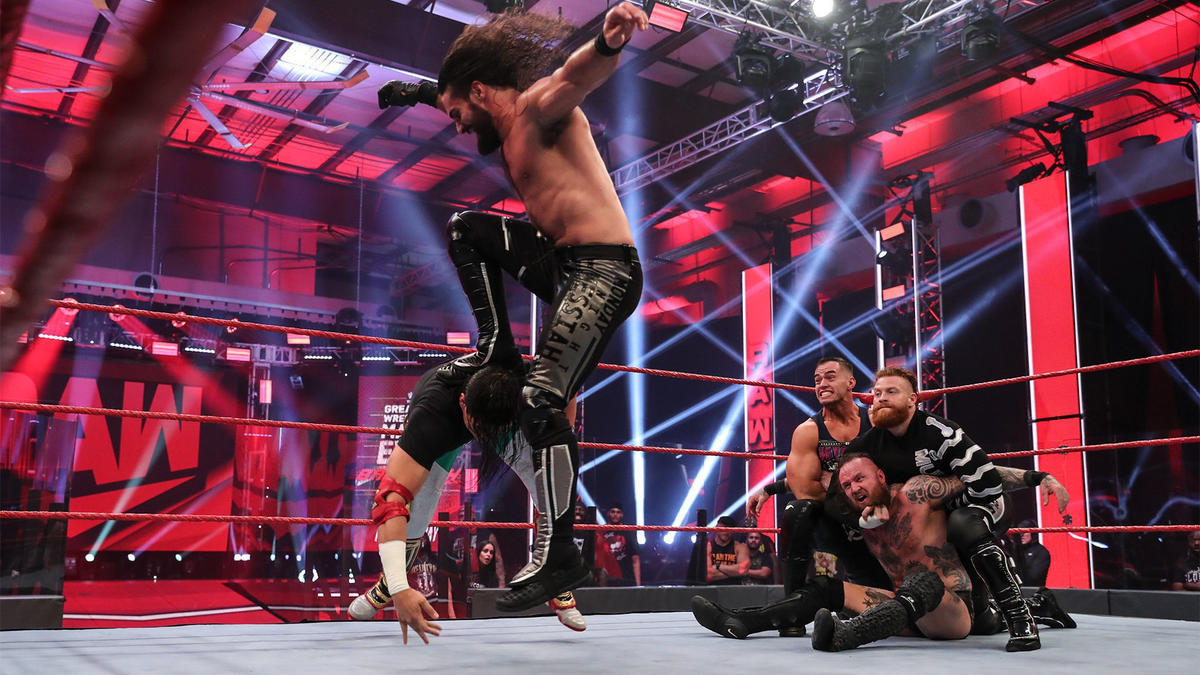 Seth Rollins is still doing the cult leader thing, and he’s got a hot new friend in Austin Theory. I’m pretty jealous, because any attempts I’ve made to have a series of himbos follow me around and praise my every move went south real fast. Rollins kicked off Raw this week by saying goodbye to Rey Mysterio, who is in yet another retirement angle. Aleister Black interrupted him, leading to our first match of the night. Murphy and Theory gave Rollins the assist early on, so Humberto Carrillo came out to backup Black. Rollins and Black had great chemistry here and some really good sequences. I wouldn’t be surprised to see them face off again soon. Black was able to get the knees up for Rollins splash, but Seth escaped a submission to deliver a powerful. Having friends was the true downfall here, as Carrillo distracted Theory and Murphy at ringside, which caught Rollins’ attention. This allowed Black to roll him up for the win, but after the match the messiah and co beat both Black and Carrillo down for their heroic efforts. 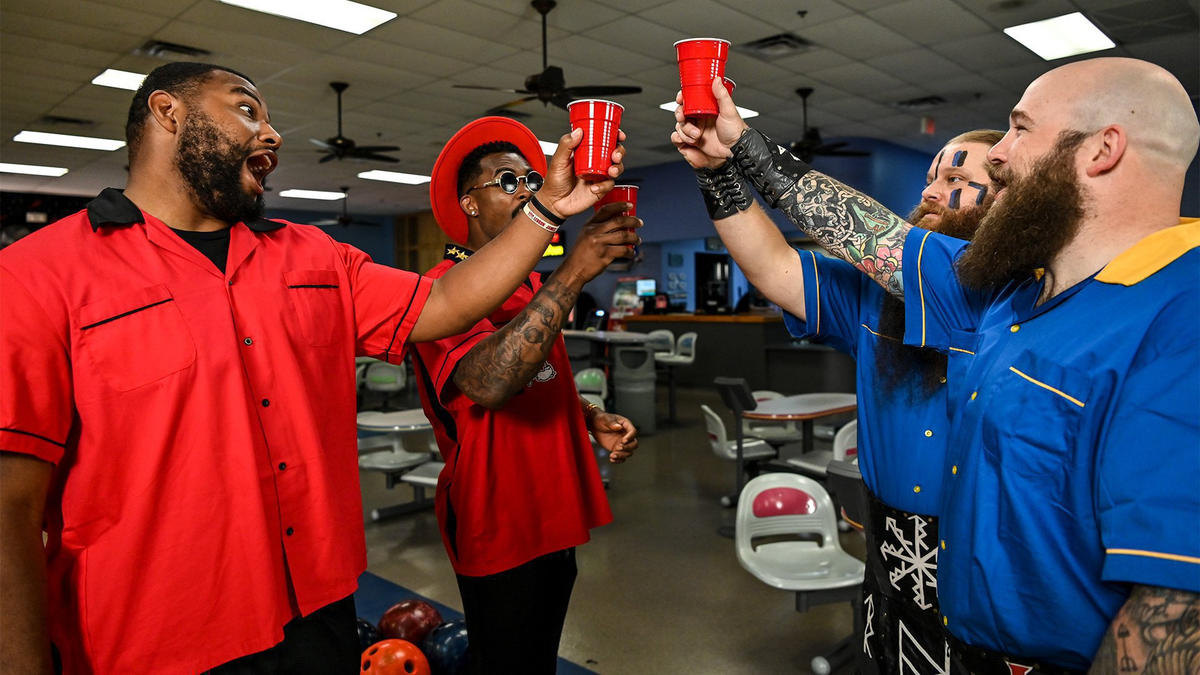 Best of the Bowl

The Street Profits and the Viking Raiders have been going back and forth in a variety of sports your uncle is probably interested in; basketball, axe throwing, and golf! This week they put their non contact skills to the test at a bowling alley. The Raiders were surprisingly restrained, considering bowling alley food is as close as we get to authentic viking cuisine, and dominated most of the time. After calling on the power of former bowling champs the Smoke, Ford and Dawkins bounced back and nearly evened things up, before the Raiders managed to get the win.

While it’s not top quality television, I don’t hate these other events segments. Ford and Dawkins are charismatic enough to make almost anything work in WWE, and seeing wrestlers in bowling shirts and wrestling gear is pretty funny. My pitch for future pandemic wrestling episodes is actually a shoot bowling tournament called Bowl for All. WWE can have that idea for the low price of two Angel Garza cameos. 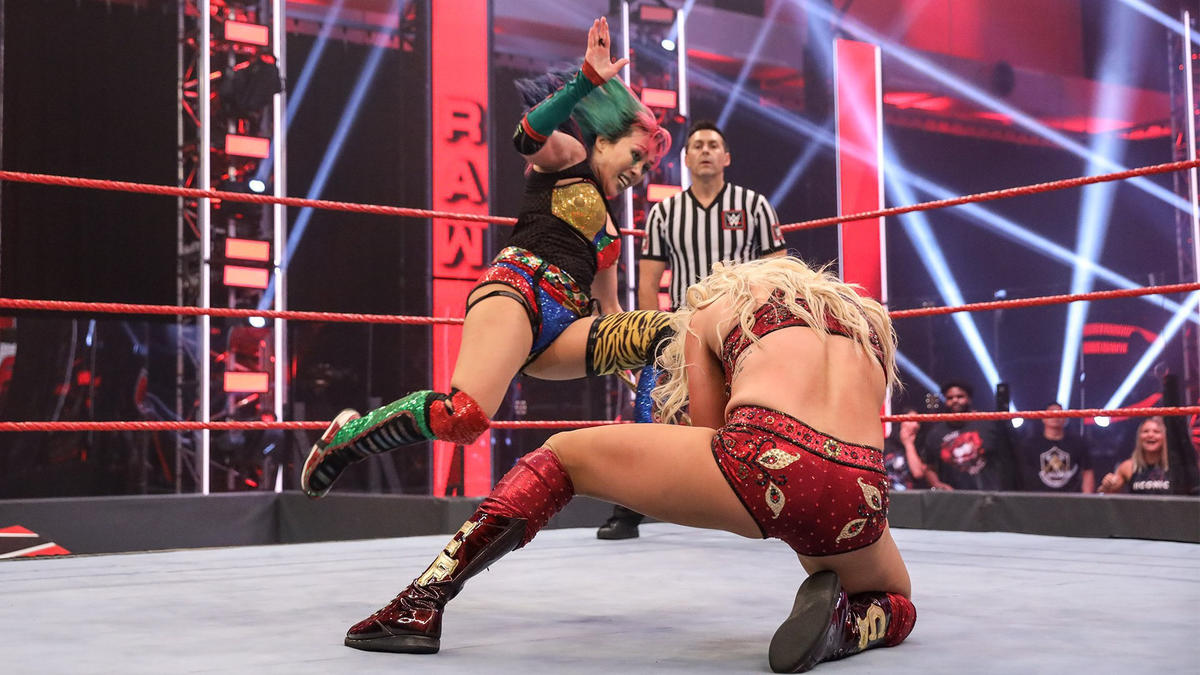 Charlotte and Asuka put on yet another banger Monday night, leading up to Asuka defending her title against Nia Jax at Backlash. As we’ve seen before, the story is that Asuka can never quite seal the deal when it comes to Charlotte. There was a great series of counters where the two went back and forth with submissions. Flair managed to get out of the triangle hold and delivered a power bomb, but Asuka kicked out. As she was starting to fight back again, her own music hit and Nia Jax walked out in full Asuka costume. I’m pretty sure this exact scenario has happened to Asuka before, but why would a babyface learn from past mistakes? The Empress was so distracted she was counted out, and Charlotte won. Jax then knocked Asuka out on the ramp to end the segment. 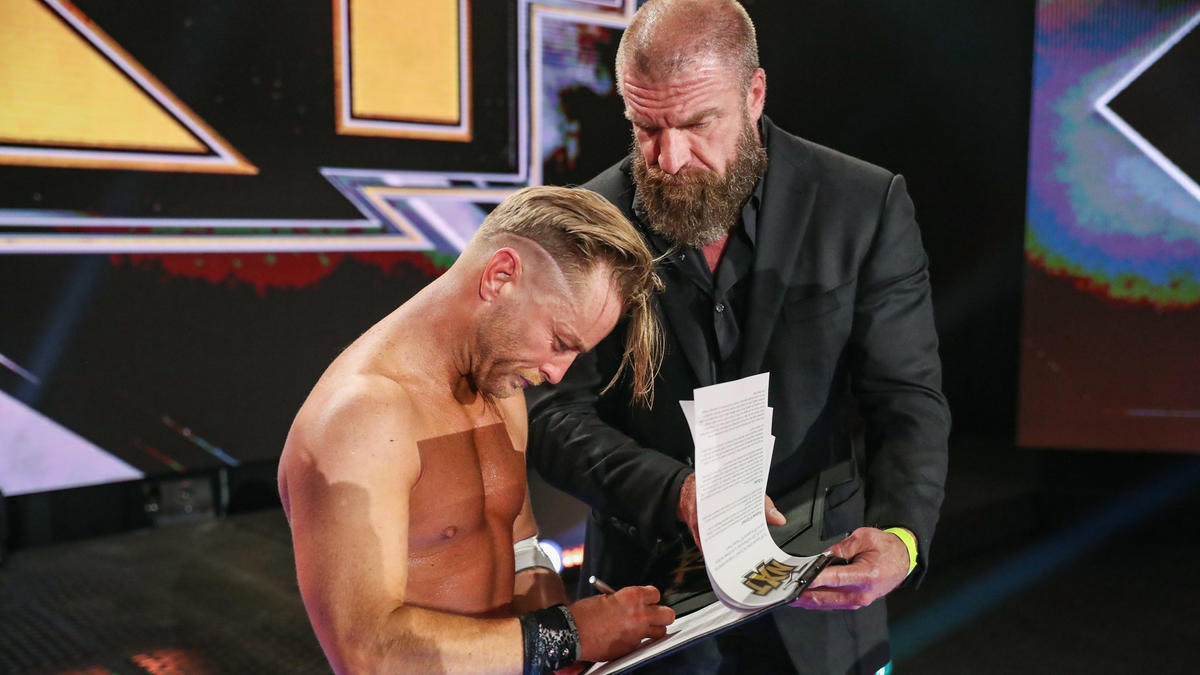 Feel-Shitty Moment of the Year

In a tough competition for most tone deaf company right now, WWE offered Drake Maverick a contract on NXT this Wednesday, just a few weeks after he and many other wrestlers were let go as a result of COVID-19 cutbacks. Maverick’s story in NXT’s Interim Cruiserweight Championship Tournament is no doubt intended to be heartwarming; the consummate underdog receives one last shot at his dreams and gives it his all. But the combination work-shoot story here fails on almost every level. While Maverick’s impassioned plea on social media after being fired was incredibly moving, WWE taking that genuine emotion and love for wrestling and turning it into a hamfisted storyline that ends with Maverick claiming he simply worked harder than anyone else is a rough time. The layoffs at WWE, and literally everywhere else during COVID, were real, and dozens of very talented and very good people lost their jobs. While I’m sure many of them will land on their feet, running with a storyline where a worker claims all you had to do was try a little harder to stay employed at a company laying off full time workers while also paying millions to a man who makes about 5 appearances a year, isn’t great. On top of that, seeing Maverick finally be used well and allowed to wrestle the way he should have two full years ago feels like much too little too late. You guys had this man on your roster and you made him pee himself on live pay-per-view.

To his credit, Maverick put on a fantastically emotional show throughout the tournament, especially in the finals against eventual winner El Hijo del Fantasma. After losing to Fantasma, Maverick was immediately offered his contract by Triple H, which not only feels shitty for all the previous reasons, but weirdly takes away the moment for Fantasma, an incredibly talented luchador who could be destined for great things in NXT. Why have Maverick lose if he’s going to be the big moment anyway? All in all, while Maverick certainly deserves this job, I can’t help the horrible taste this storyline has left in my mouth. 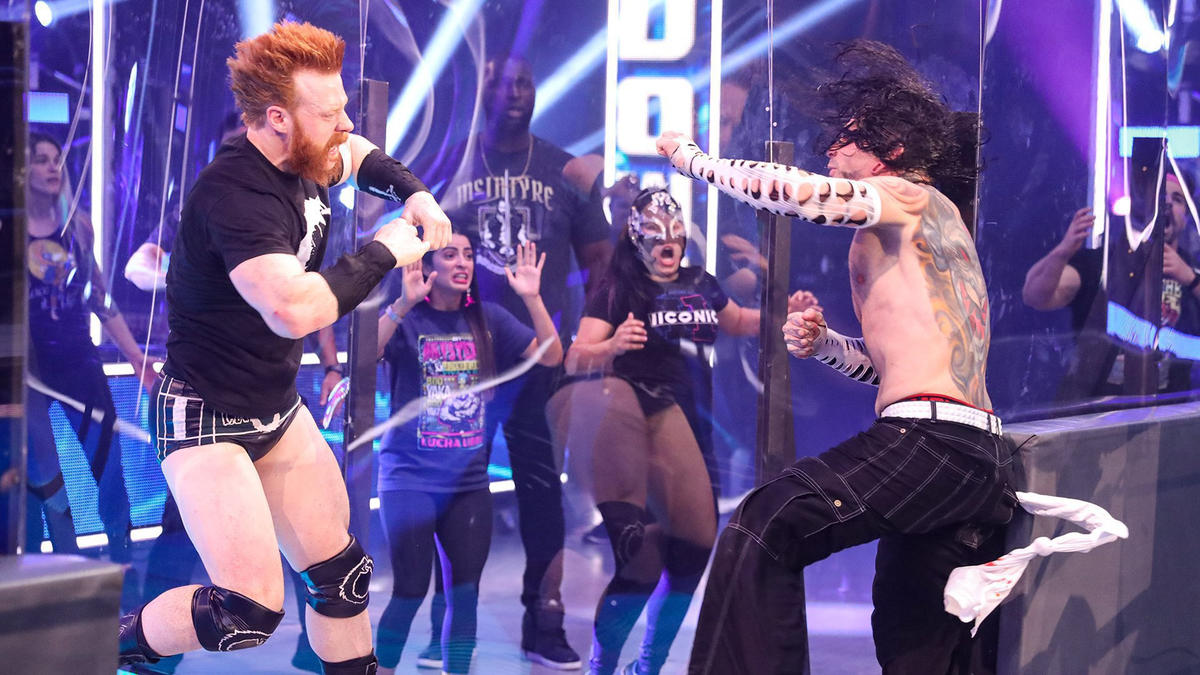 On Monday night, Jeff Hardy was arrested for drunk driving in a questionable segment, the main question being “Why would you run any police related angle right now?” WWE is no stranger to dragging people’s personal lives in the open for storylines, but this feels extra uncomfortable for Hardy. On SmackDown, Hardy kicked off the show by saying he was knocked out after driving to the arena Monday, and when the police arrested him he hadn’t been drinking himself. Someone had set him up to be arrested, and he mentioned a witness had seen a man with red hair and a beard running away. Since there’s only one redhead in WWE, Sheamus came out to confirm his involvement. He claimed Hardy was unable to stay sober and called him a junkie, and a disappointment to his family. I imagine Matt is too busy trying to run Sammy Guevara over in a golf cart to make a statement. Sheamus delivered a Brogue Kick and laid Hardy out on the ramp. 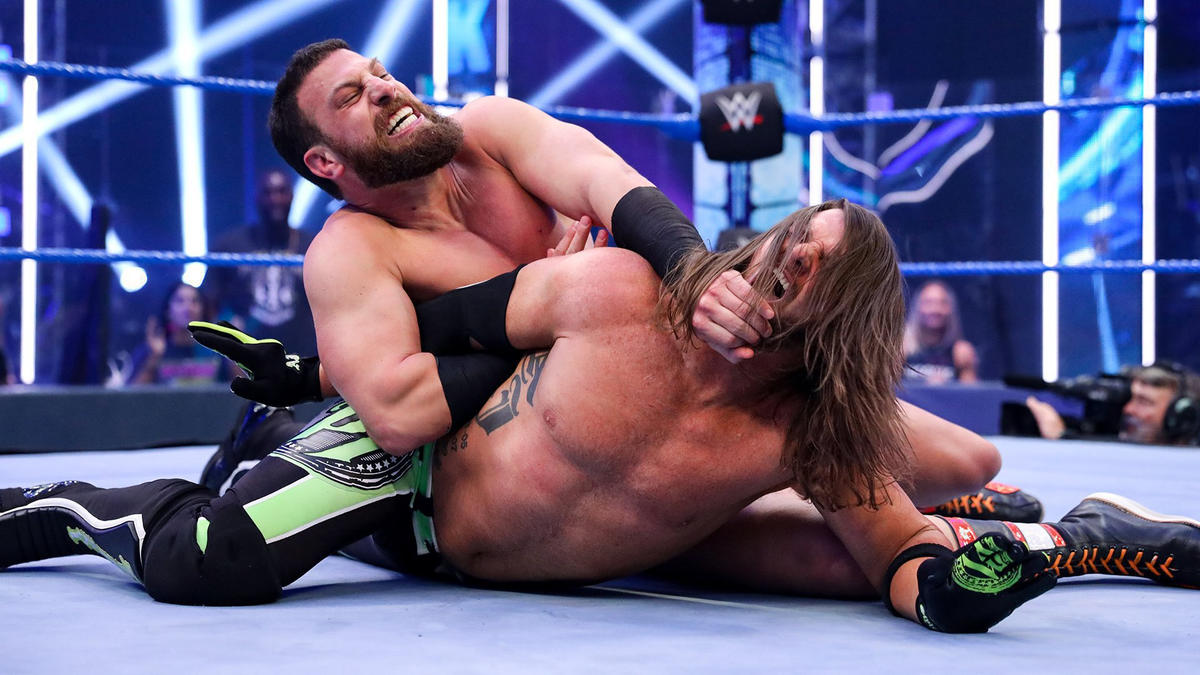 Drew Gulak is back in WWE, because I don’t really deserve good things in this life, I guess. Following a contronfation between Daniel Bryan and AJ Styles ahead of their match for the Intercontinental Championship, Gulak  backed up BFF  Bryan by taking on Styles this week. Gulak was fired up from all that time off and came out hot, attacking Styles before the bell rang. It was an interesting match up with two very different techniques, although the match felt shorter than it maybe could have been. Gulak played to his mat skills and was able to match much of Styles’ strikes. Styles went for the Styles Clash, but turned to show off right in front of Bryan for maximum embarrassment. Gulak was able to reverse and pin Styles in probably his biggest win in WWE. Bryan and Gulak embraced, and love was real for just a moment. Styles, who no longer has friends in WWE, was left alone in the ring. There’s a metaphor here, probably. 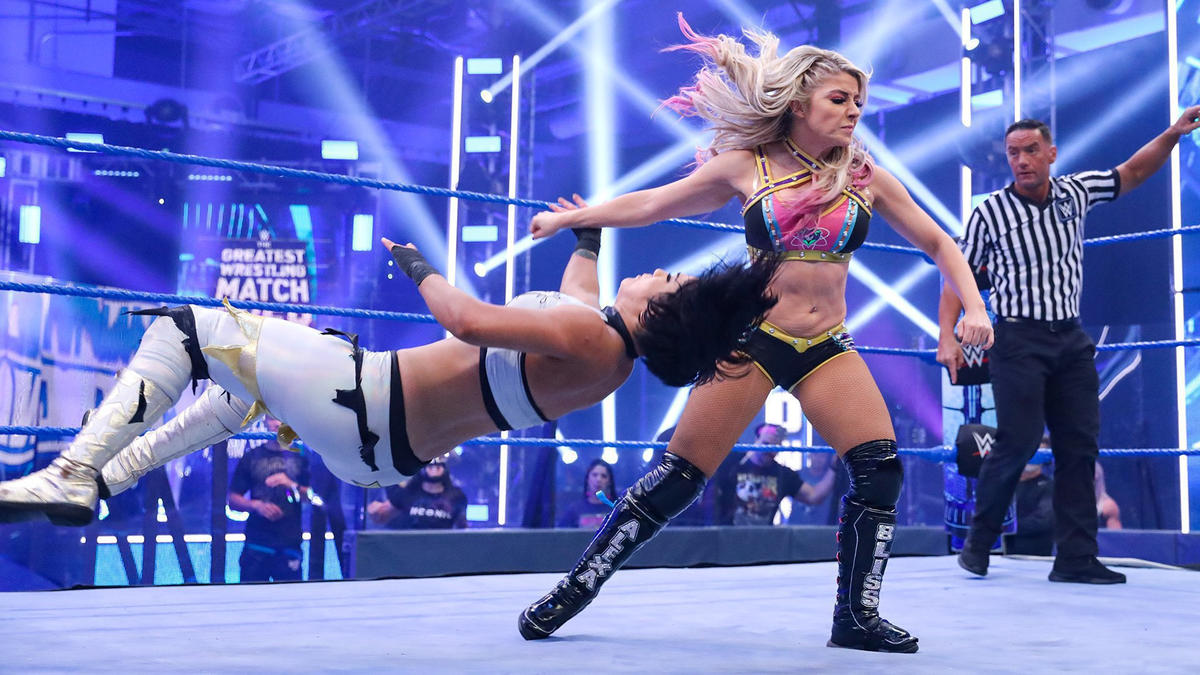 BlissCross put their tag titles on the line against Sasha Banks and Bayley Friday night. Despite becoming champions at WrestleMania two months ago, Bliss and Cross haven’t done a ton with the women’s tag belts, which seems to be a recurring theme for those titles. This match started out with Cross in control, taking out Bayley and Banks on the outside. Banks, ever the ultimate heel, pulled Nikki’s hair to get her off Bayley, before tagging in and getting Cross in the Bank Statement. A miscommunication with Bayley caused her to break it, but Sasha locked the submission in again. Nikki managed to counter into a pin, but Banks reversed into a roll up, and we have new women’s tag champs! Bayley and Sasha celebrated, and we’re left to wonder if they’ll ever pull the trigger on these two turning on each other. The title change doesn’t feel necessary, but it’s not quite a negative, either. Banks and Bayley are a great team, although I can’t help but wonder if we’ll see them fall victim to yet another short reign.