The Bella twins are going into the Hall of Fame! A huge congrats to two of the biggest female stars of WWE’s 2010s, and don’t let anyone tell you otherwise. This week we also got a Goldberg appearance, Becky paying her dues, and Matt Hardy being brutally murdered while a crowd chanted for more, and literally no one came out to help him. I guess Jeff doesn’t have cable anymore. 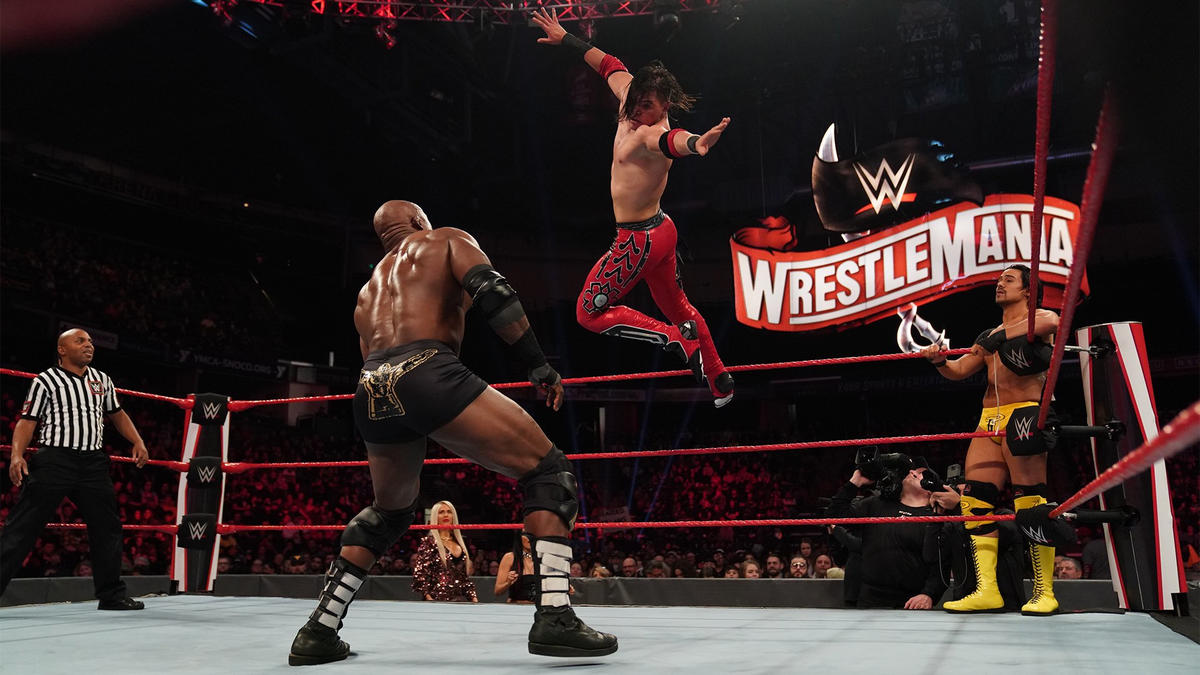 WWE saw something I loved in Humberto Carrillo vs Angel Garza and threw in something I absolutely hated with the inclusion of Rusev, Lashley, and Lana. Liv Morgan may have found a way to escape from this feud, but these three somehow can not escape each other. Lashley teamed with Garza to face Carrillo and Rusev, with Lana and Zelina ringside. Zelina respectfully passed the sequin crown to Lana tonight, which was very kind of her, considering 90% of her closet. Angel and Humberto had some really great moments here, including Garza running to the barricade to get a kiss from a fan, then being immediately hit by a dive from Carrillo as he turned around to gloat. The Lashley/Rusev stuff is very been there done that, but Rusev throwing Garza around the ring like he weighed less than his tiny dog was also good. Lashley was able to roll Rusev up after a Machka Kick for the heels to win, but Rusev retaliated by attacking Garza and throwing him out of the ring. A personal hit to me, but also yet another blow to the idea that Rusev could go anywhere in this feud. 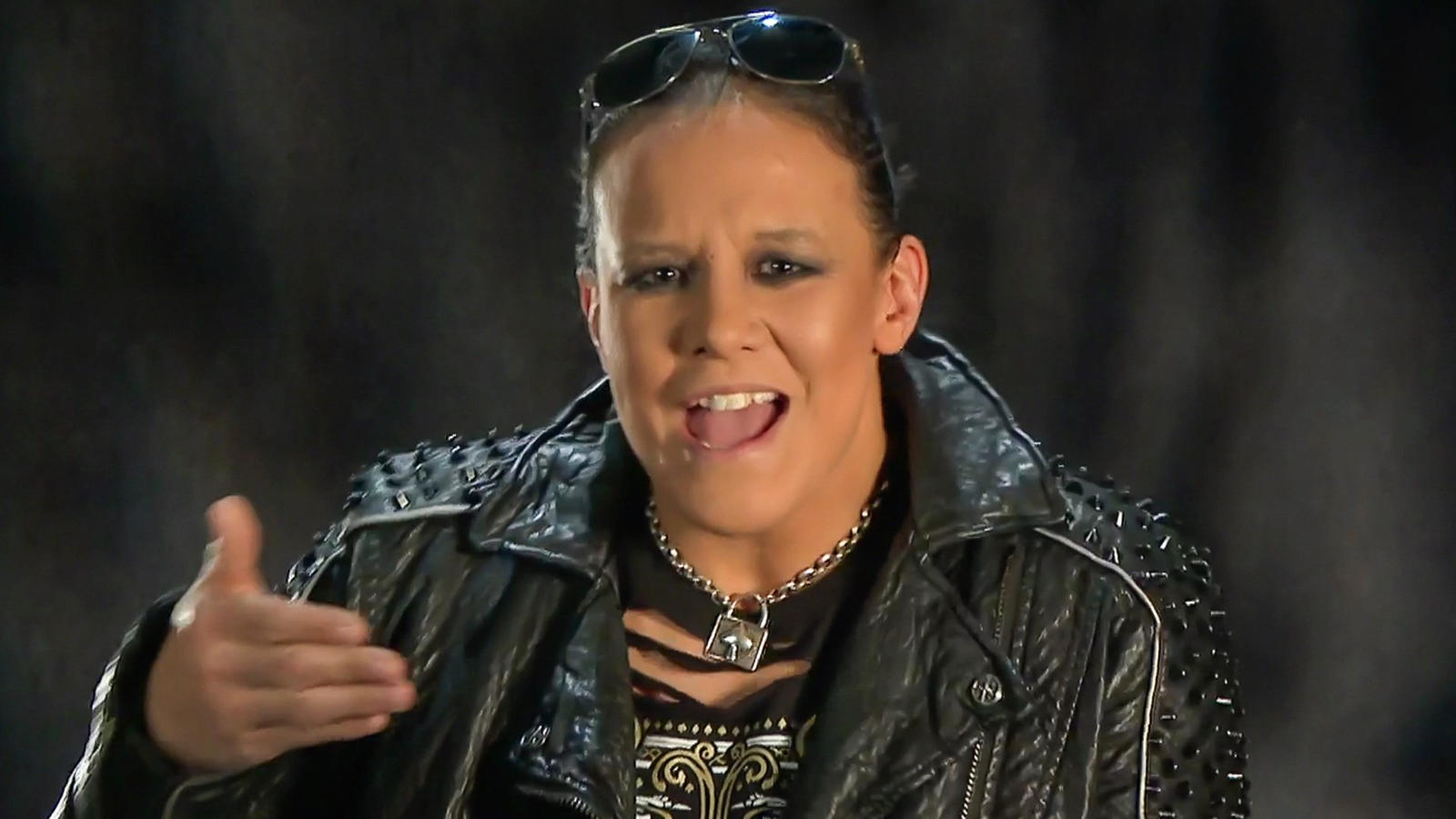 In a display of solidarity with the working men and women behind the scenes, Becky came to the ring with a bag of cash and threw hundreds down on the mat, presumably for the crew to divide equally later. She claimed what she was going to do to Shayna Baszler would be so brutal she would receive a hefty fine as a result, and she wanted to cover her bases now. Baszler of course gave Lynch a brutal neck bite last week, literally swallowing the blood of her enemies in a huge metal move. As Becky was calling her out, Shayna appeared on the tron and announced that she would be in the women’s Elimination Chamber match, competing for a chance to challenge Lynch for the Raw Women’s Title. She also dropped the s-word, living out Chuck Taylor’s cable television dream. Lynch and Baszler at Mania would be a great match, especially given how wildly popular both women are. 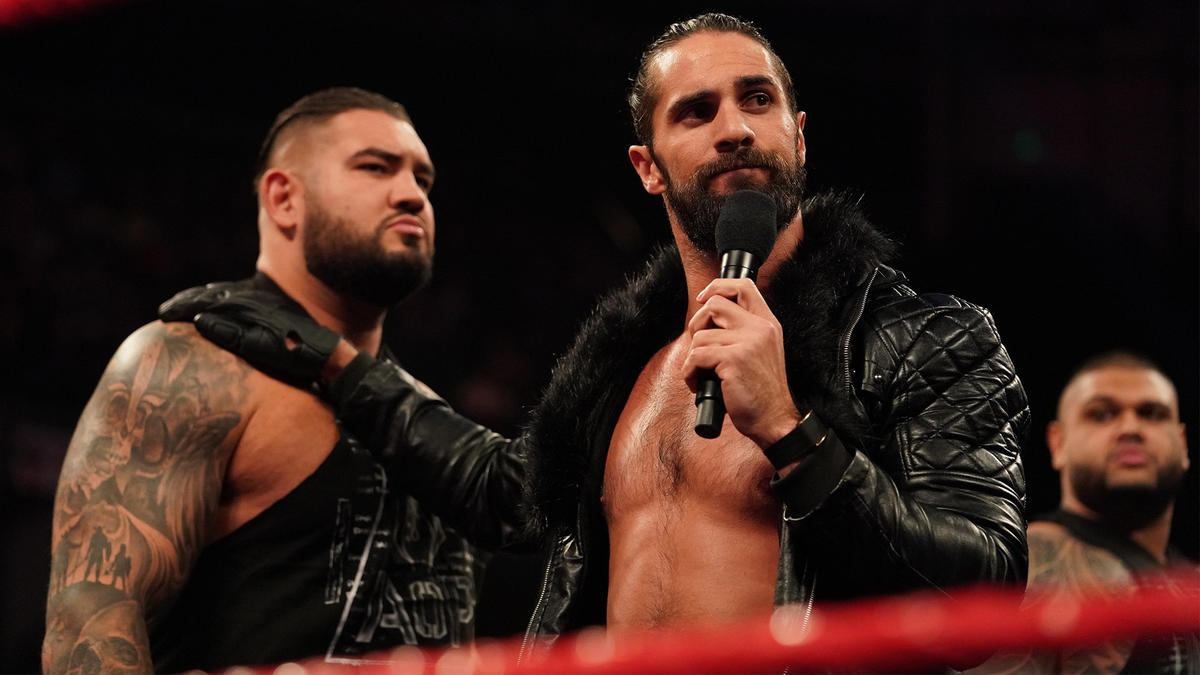 The Messiah as a character is hilarious, and it’s the most entertaining Rollins has been since he had that blonde streak. This week he promised fans a sermon, probably on how to be bad at Twitter and wear the same pair of black jeans all the time. On his way to the ring, Rollins shook fans hands the way your 95 year old great aunt greets a preacher, with both hands and a surprisingly strong grip that belays a bit of a threat. The ring was decked out with a podium and lovely Kinko’s prints of his stained glass window. Seth gave his best Handmaid’s Tale prequel audition, announcing he had completed his “phase one” by taking out Owens, Joe, and the Viking Raiders. The Raiders then came out to interrupt, going after AOP as Rollins escaped up the ramp, only to be met by Owens, who delivered a stunner. This lead to a 6 man tag in the main event between the Raiders and Owens and AOP and Murphy. Rollins wasn’t present for the beginning of the match, presumably launching his spiritual podcast backstage, but later ran down to take out Owens and cause the DQ. While the disciples looked to get rid of KO for good, the Street Profits came out to help, finally injecting something new into this same tag match we’ve seen for the past month. 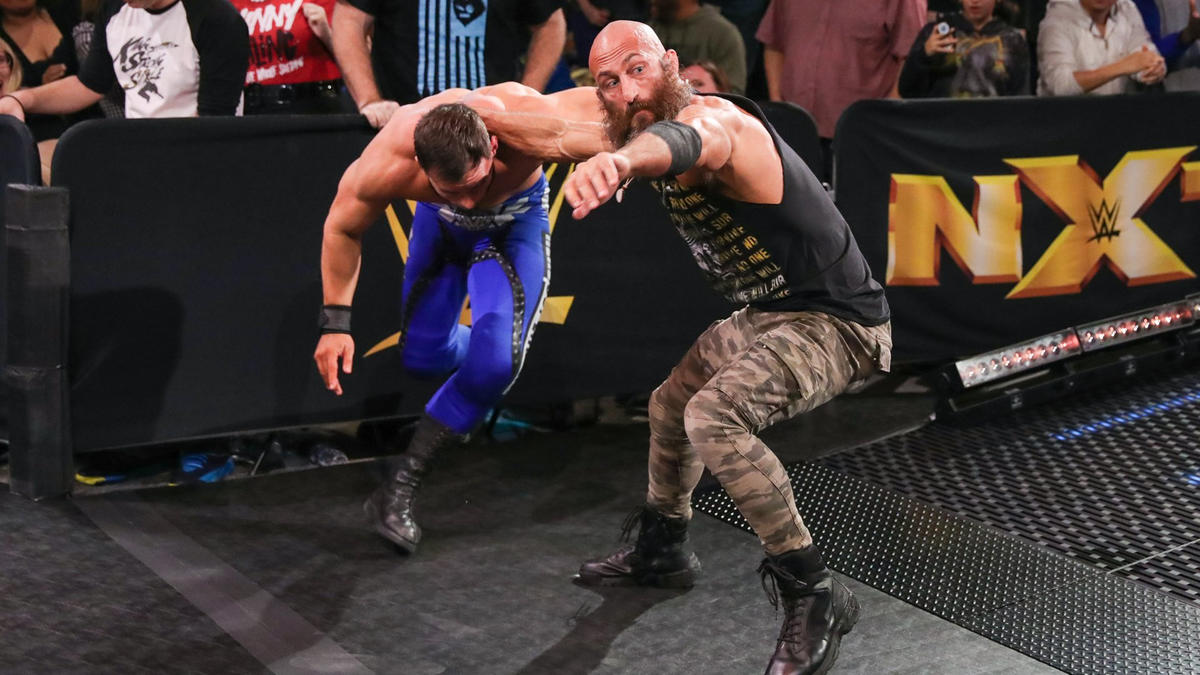 After being betrayed by Johnny Gargano for only like the fourth time ever, following all of his own betrayals of Gargano, Tommaso Ciampa was heated. He interrupted Austin Theory’s scheduled match to give a promo calling out the Funko lord for causing him to lose his chance at regaining the NXT title at TakeOver: Portland. Luckily, he didn’t spend time asking Johnny why he could do such a heinous thing, because frankly it seems super obvious to literally anyone. Theory, who has received little tv time but has been built up as a credible star prior to this, tried to cut Ciampa off but got taken out for his trouble. Ciampa threw Theory into the barricade repeatedly and laid him out on the ramp. It was surprising to see someone like Theory in this spot of being absolutely destroyed, but it sells just how pissed Ciampa is that his frenemy could do something like this. Although, again, we’ve all seen NXT before, so he really should have assumed this was a possibility. 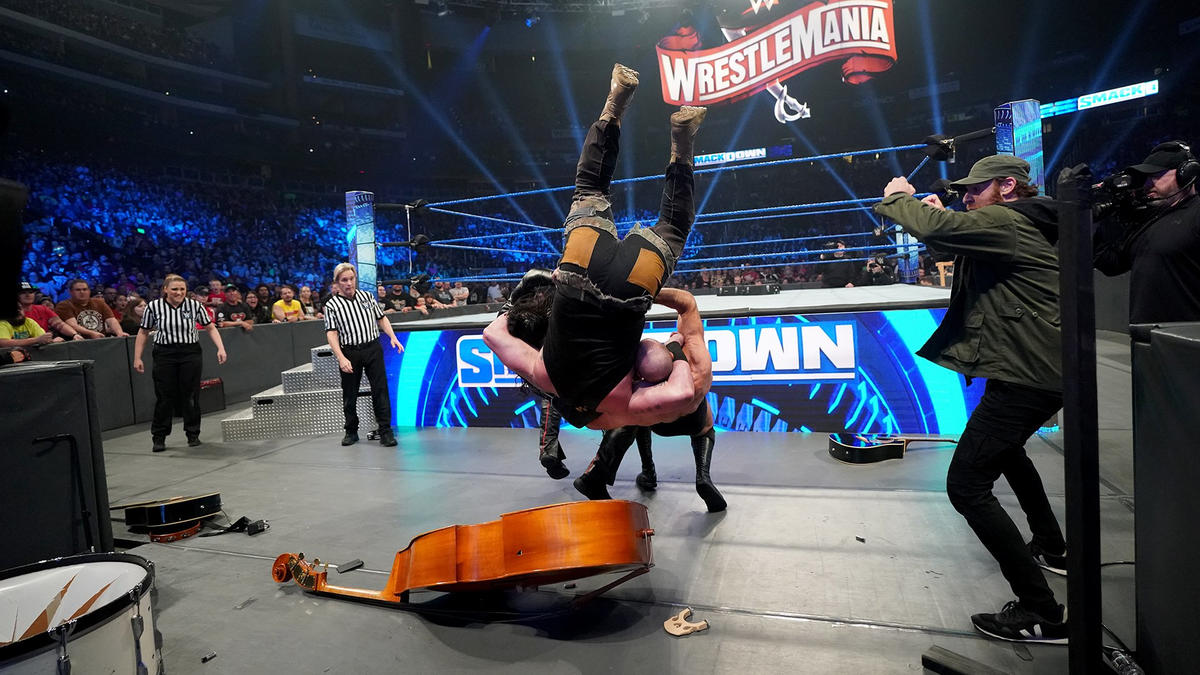 Listen to the Music

The second ever Symphony of Distraction match took place last night, which means a lot of local music programs are out several drum sets right about now. Nakamura and Cesaro faced Elias and Strowman, after being interrupted during an emotional protest concert last week. This match was a good time, especially considering how much this feud has dragged for months. The instruments made for some really great spots, including Shinsuke getting choked with a tambourine, Strowman being suplexed into a bass, and Sami swinging his tiny ukulele like a baseball bat. Shinsuke even gave a Kinshasa to a gong. This is the kind of match Strowman excels in, where he can just do crazy ass spots the whole time and the crowd goes wild for it. He finally won by power slamming Shinsuke into a piano, which held up incredibly well considering. A fun, goofy match that capped off an unfortunately lengthy feud. 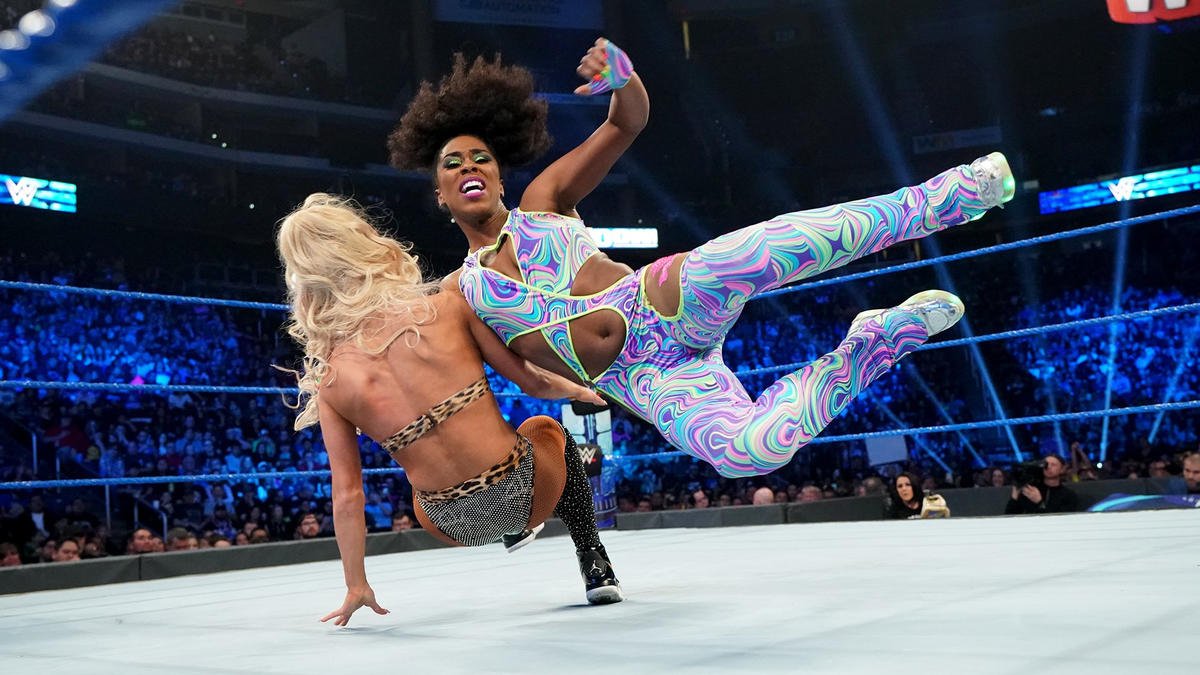 The Glow is Blinding

After Naomi and Carmella teamed up to take out Bayley last week, the two faced off on Friday to see who would go to Super Showdown next week to challenge the champ. The role model herself watched the match from ringside, and ultimately tried to interfere on behalf of Carmella, proving that Bayley fears the glow and those sweet light up sneaks. Despite dressing like she’s starring in a mid-2000s caper comedy, the ref caught Bayley and threw her out. The chemistry here was pretty good; both women have so much natural charisma that you can’t help rooting for both of them. Naomi won with her split legged moonsault, sending her to SSD to challenge for the title. While I don’t expect her to get the win in the beautiful and unproblematic city of Riyadh, I’d love to see her and Bayley face off again at mania. 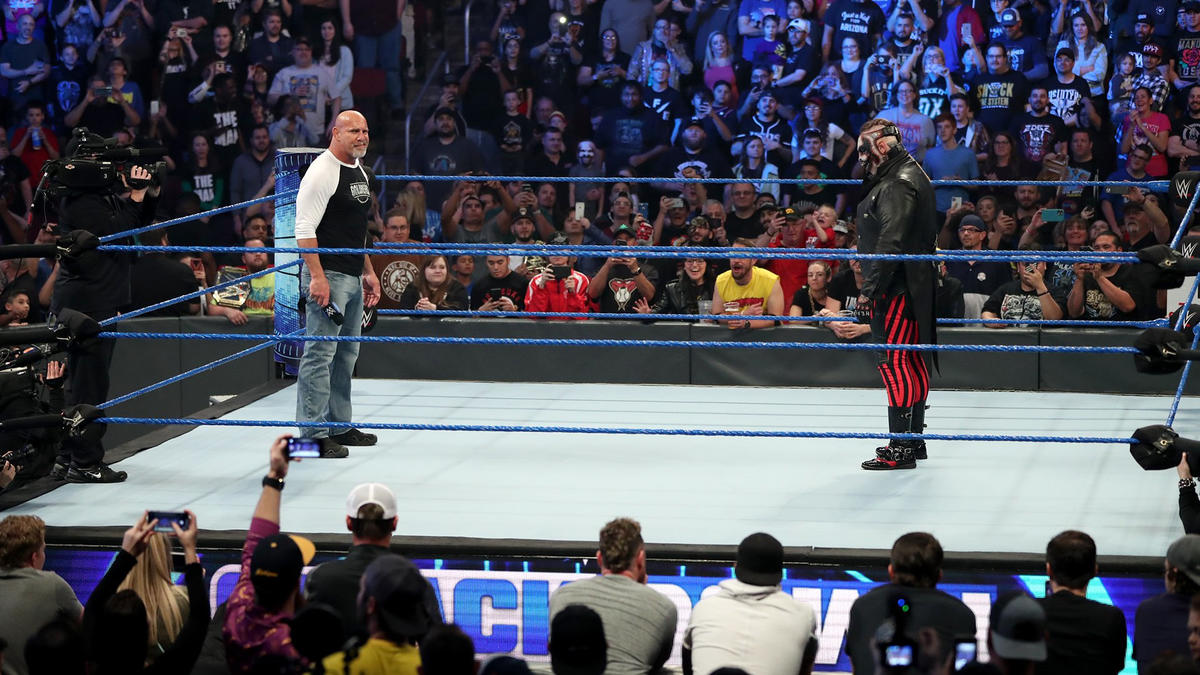 Goldberg and his terrible new shirt were ready to call out the Fiend one last time before Super Showdown next week. Wyatt interrupted and showed off his beautifully curated gallery in the funhouse, and introduced Goldberg to all his puppet pals. Then the lights went out, and the Fiend appeared in the ring. Goldberg hit him with a spear, then went for another, before the lights went out again and the second best psycho clown vanished. The crowd was super into Goldberg, because wrestling fans love little more than chanting, pyro, and remembering the 90s. It was interesting that one spear took down the Fiend when he’d been impervious to multiple stomps to the head in the past, but that’s just the strength of being in the WWE Hall of Fame. Drew Carey could probably do the same and Wyatt wouldn’t stand a chance. With a triumphant ending to SmackDown, my money would be on Goldberg losing to the giant mallet or an oversized yard rake at Super Showdown. 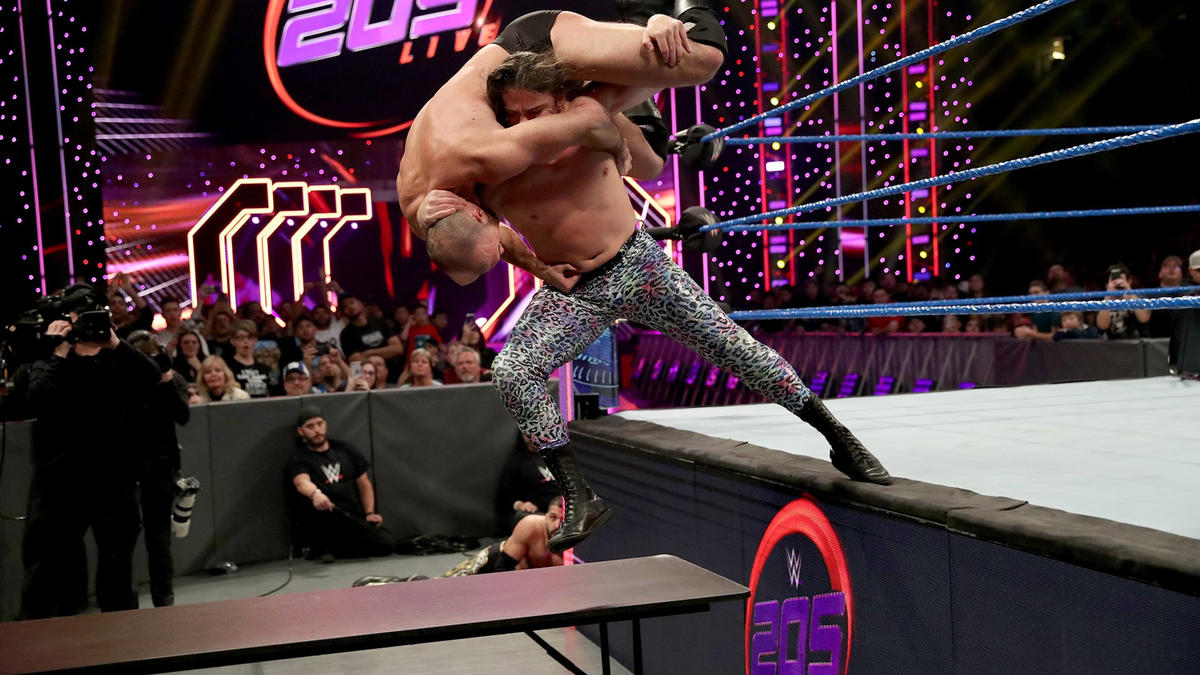 A Win for the Working Man

205 Live’s main event gave a banging No DQ tag team match between Oney Lorcan and Danny Burch and Ariya Daivari and Brian Kendrick. Sadly, Lorcan did not bring his blue jeans, but I understand sometimes luggage gets lost. These two teams have been going after each other for weeks now, and were really looking forward to putting one another through some tables. They did not disappoint, with some spots using ladders, and even one where Kendrick was duct-taped to the ringpost. Team One Two managed to DDT Daivari onto a table twice while Kendrick could only look on, and got the win for bald rights everywhere.