It’s almost time for Halloween in June with Hell in a Cell, and they pulled out the big guns this week with haunted houses, face casts, more family drama than you can shake a stick at, and a lot of property distruction. Meanwhile, NXT built to this weekend’s In Your House by bringing back Ted DiBiase’s Million Dollar Championship. Gotta stay hip to the times, and nothing says current like a money gimmick during a global pandemic. 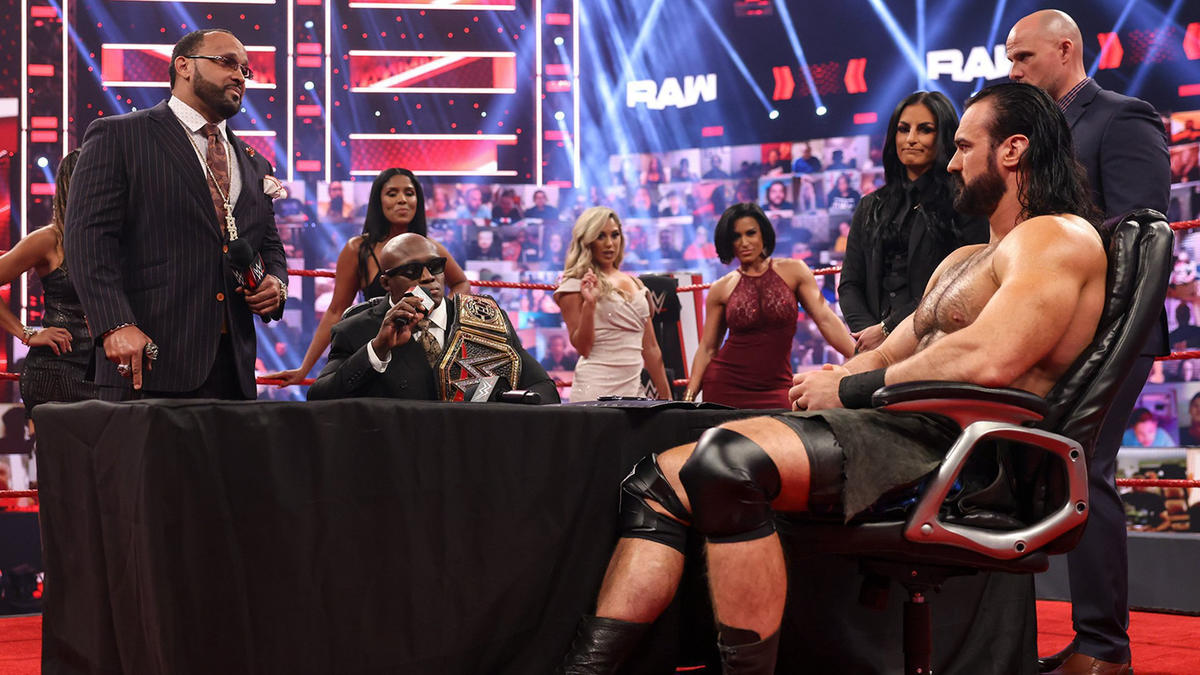 Contract signings are the main events of the legal world, so naturally, they’ve carried over into the main events of pro-wrestling. While few things are as exciting as seeing two grown men sign their name, WWE usually chooses to spice up the moment by having the competitors throw the table and/or chairs at each other. This week was a nice change of pace, as Bobby Lashley and Drew McIntyre didn’t come to blows after signing on the dotted line. McIntyre arrived first, and just as it seemed the champ wouldn’t show, Lashley, MVP, and friends arrived with a new addition to the paperwork. If McIntyre loses at HiaC, he won’t receive another WWE Championship opportunity. Drew agreed, but only if their match would happen inside Hell in a Cell. The Hurt Business accepted the proposition and made one last kilt joke, but nobody threw hands. Incredible restraint from these men. Drew did, however, pull out a sword and cut the table in half, but what’s the destruction of one more wrestling table? They’re just keeping Ikea in business. 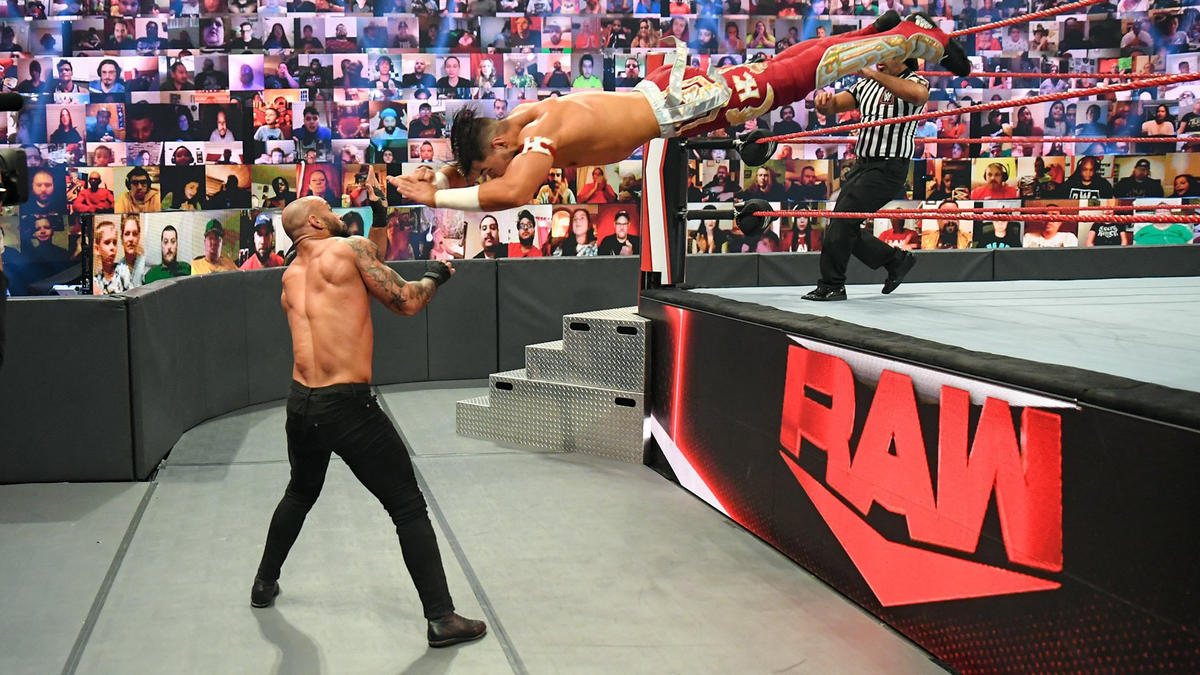 High Flying Too Close to the Sun

Sheamus has been plagued by Humberto Carrillo and Ricochet recently with back to back victories over the champ last week, which left him with a broken nose and sporting a face guard. You know a storyline is getting serious when WWE brings out that bad boy. This Monday, it was nice man vs nice man (except for all the times he had large birthday parties during a pandemic) for a shot at the US champ. Sheamus and his face candy sat on commentary for the match, as Ricochet got the advantage on Carrillo at the bell. Humberto landed a Falcon Arrow for a two count, then followed up with a huge dive to the outside, but still couldn’t get a win. Ricochet earned a near fall of his own off a suplex, but Sheamus just wasn’t impressed. They exchanged strikes on the apron, until Carrillo landed a Spanish Fly to the outside that wiped out both men. The ref counted them both out, ending the match in a draw, much to Sheamus’ delight. Most likely this will give them a chance to run the exact same #1 contender’s match next week, because there’s nothing Raw loves more than giving us a match we just saw. Regardless, I’m just happy to see Carrillo wrestle on my screen. And if anyone can pull off a piece of plastic taped to your face, it’s the Celtic Warrior.

Later in the night, MVP found Kofi Kingston backstage, and Kingston cut a fantastic promo about why he does things his way, instead of buying into MVP’s business. MVP called out Kofi’s Mania win as one of the reasons he wanted to return to WWE, a great detail and a good set-up for the eventual Kingston/Lashley title feud, which I’m very much looking forward to. 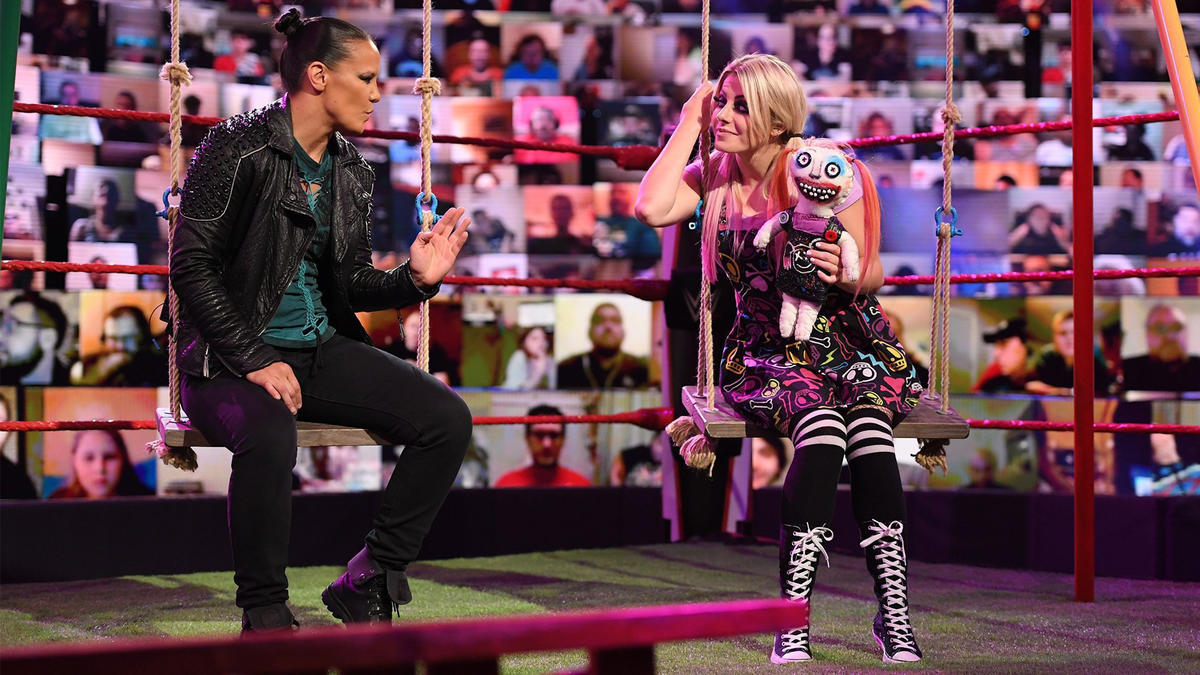 Alexa Bliss’ BFF Lily has been paying a lot of attention of Shayna Baszler lately. In her defense, it’s Raw, so there’s really not a lot left to watch. Lily and Bliss hosted Baszler on their playground this week, and I gotta hand it to Bliss, she’s really trying her best at a character that makes little to no sense. Is she a haunted child? Is she The Fiend reincarnated? Who knows, but she’s got beef with the Queen of Spades.

Bliss asked Baszler for an apology to Lily, but Shayna wasn’t interested. Probably because of all the times Bliss has tried to set her on fire recently, but who can be sure. She dropped the doll on the ground, leading to a beat down from Bliss. Alexa rolled to the outside and Shayna stomped on Lilly with all the drama of Hulk slamming Andre. The virtual crowd started flickering, and Shayna fled from the ring just in time for the ramp to erupt with pyro. Backstage, she tried to leave the arena but found herself trapped and unable to get anywhere, much like my mind while watching this segment. She finally escaped into a room and barricaded herself inside, to hide from a stuffed doll with teeth. The lights flickered again, and Baszler saw Lilly’s reflection in the mirror. She shattered the mirror but couldn’t escape the image, and the show ended with the room going dark and Shayna screaming.

While Bliss’ character is confusing, the direction of Shayna’s is outright bonkers. Baszler has taken repeated and unnecessary losses over the past few months, the worst of which may have been to Reginald just last week. It’s been to set up for this doll feud, which could genuinely be campy fun if WWE didn’t want us to take Lilly seriously. On paper, Baszler vs a doll is a hoot. On video, it’s uncomfortable and snooze worthy. 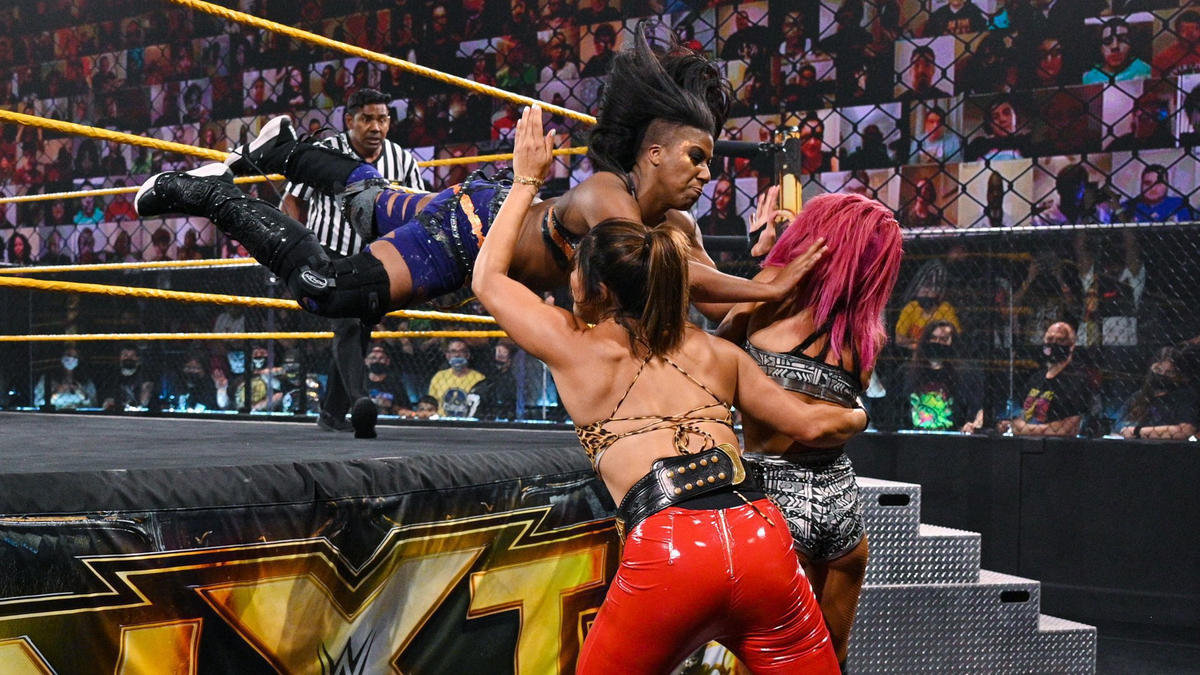 NXT’s “In Your House” is happening this Sunday, which somehow comes as a surprise, even though I watch this show every week for a job that makes my dad very proud. On a moderately lackluster card, we’ve got Raquel Gonzalez defending against Ember Moon, which should be fun if we ignore Gonzalez liking IG posts about Trump boat rallies. This week, Ember said she was going to eliminate Kai from the equation so she wouldn’t be able to meddle in the title match. She struggled early on, with Kai getting the early lead. A huge kick knocked Moon down, but she still barely kicked out. As Dakota regrouped, Gonzalez tried to run interference on the outside but missed a big boot, and both she and Kai got hit with a dive from Moon. Ember wanted the Eclipse, but was kicked off and hit with a slam from Gonzalez for a DQ. Moon retaliated by beating back both women and finally getting the Eclipse on Raquel, standing strong to end things. Moon is still one of my favs in NXT, and she and Kai worked well together here. It’ll be interesting to see her style against Gonzalez on Sunday. 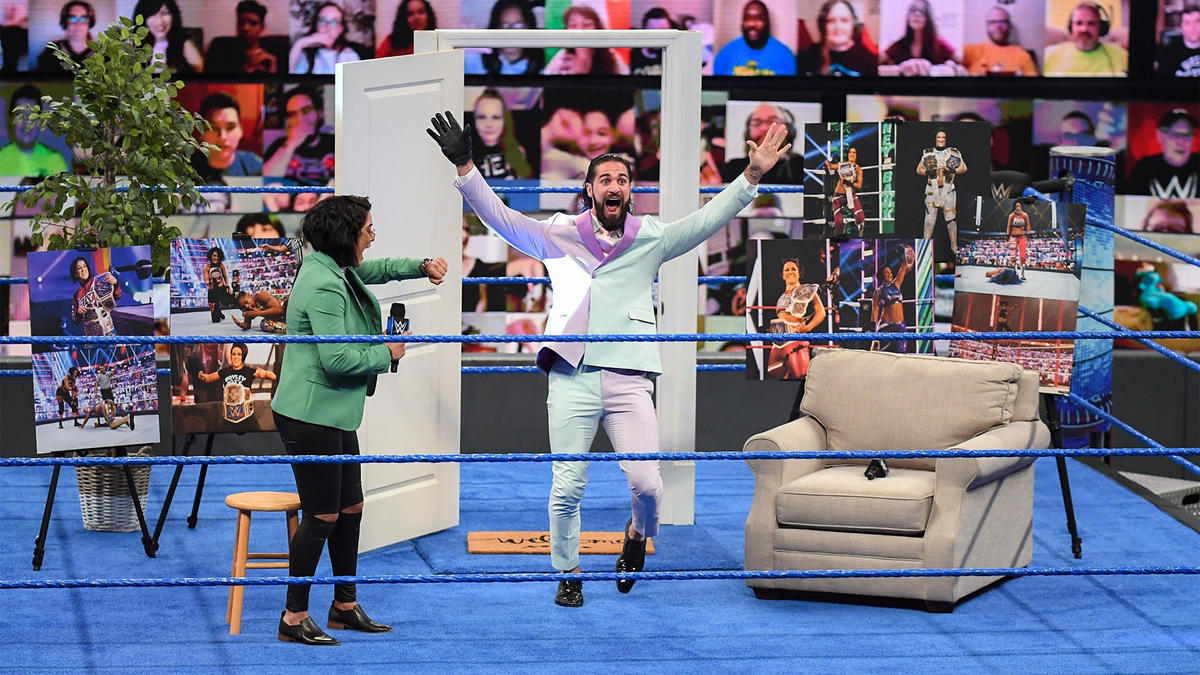 In a move that was huge with people who like to listen to the Waluigi laugh, Bayley invited Seth Rollins on the Ding Dong, Hello show. They celebrated each other’s recent successes, like Bayley learning how to hack into the virtual crowd and Seth stomping Cesaro’s head three times. After giggling their heads off, the doorbell rang, and Seth opened it to find the Swiss Cyborg himself. Cesaro launched him around the ring, ripping his pants off and leaving the Architect drip-less. Cesaro wrecked the set dressing by javelining the fake plants over the ropes, as Seth fled while his blazer was still intact. While Bayley tried to pick up the pieces of her talk show, Bianca came out to laugh it up right in the Role Model’s face. Seth and Bayley were a good heel pairing here, and Cesaro’s return surely means we’ll get a banger at HiaC. 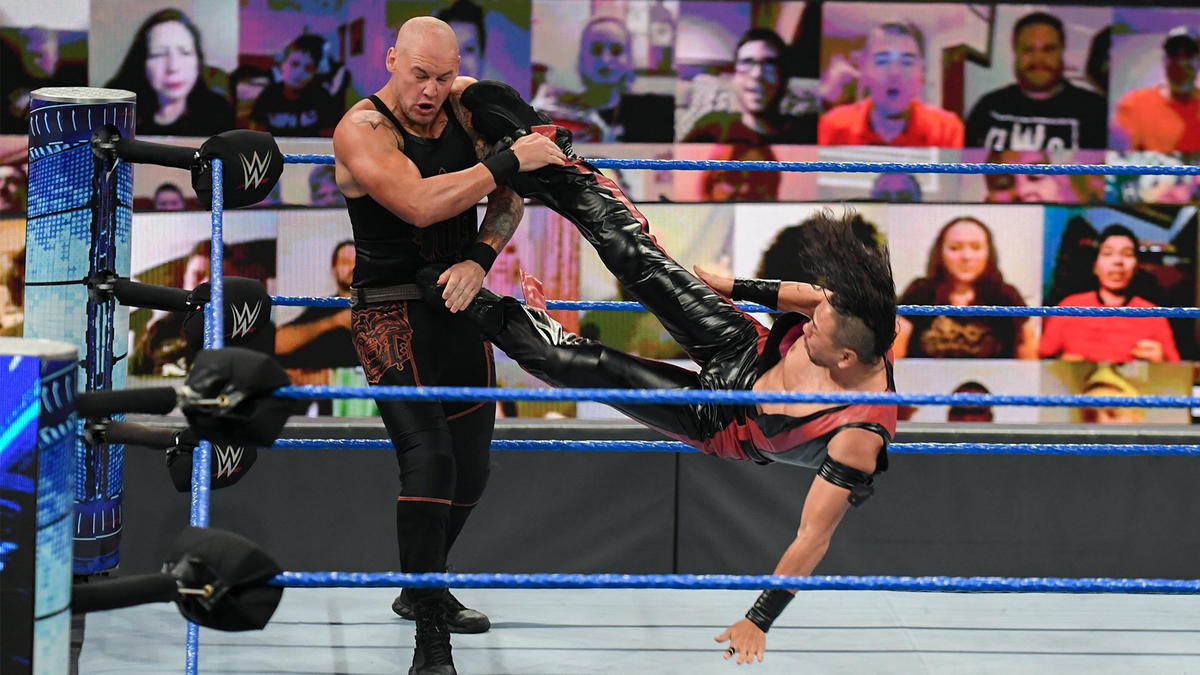 Shinsuke Nakamura and King Corbin have been going back and forth on the right to wear a crown this summer. The former King of the Ring and the King of Strong Style are both trying to make the Game of Thrones thing work; Shinsuke now has Rik Boogz play him down to the ring, which is genuinely great. Last week, Corbin got the win with a handful of pleather jumpsuit, but Boogz provided the assist to let Nakamura get away with the hot accessory. An early distraction from the guitarman gave Shinsuke the advantage here too, going for a Kinshasa only to get caught with Deep Six for a close count. Corbin kept control with a suplex, but Shinsuke rolled him up score the win. Corbin knocked down Shinsuke and grabbed the crowd for himself, but Nakamura plucked it from his head and Boogz sent the king into the barricade. We can look forward to another week of Shinsuke posting cool crown videos on Instagram. Nature is healing. 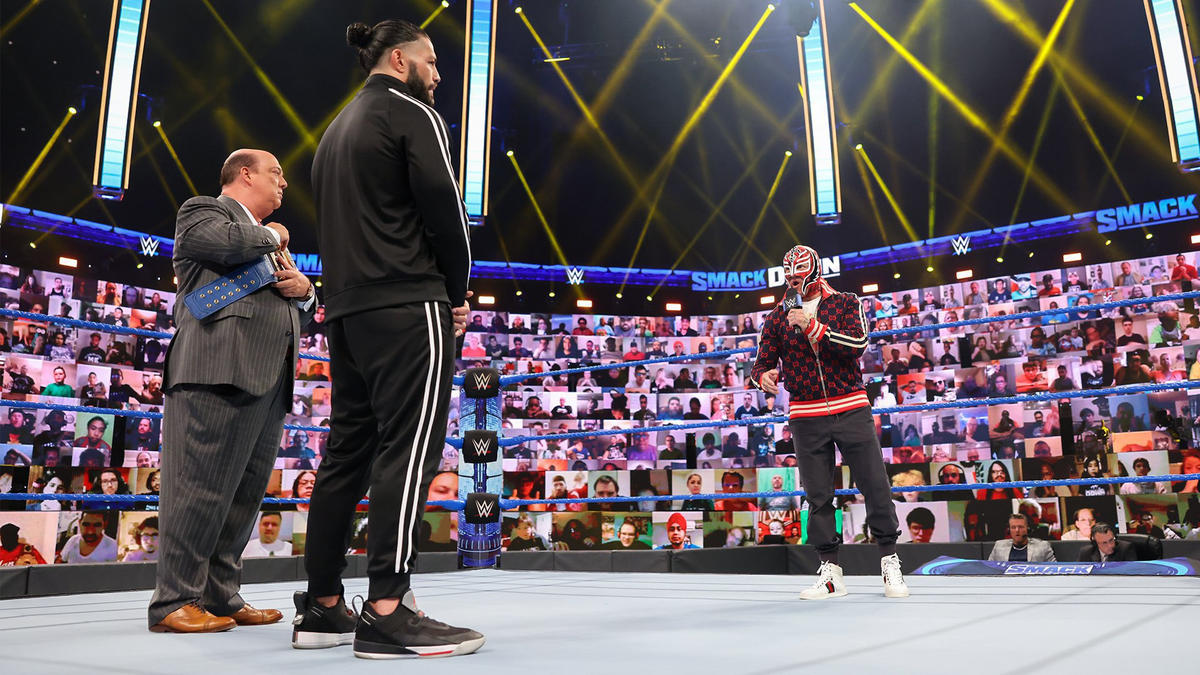 I watch wrestling for realistic and relatable content, so the storyline where Roman Reigns is the only one in his family making sense is greatly appealing. Reigns and his cousins were at it yet again, beefing all over SmackDown on Friday. Jimmy called out the Tribal Chief for costing him and Jey their tag title match last week, and asserted that Reigns didn’t want them to get gold, because it would threaten his standing. Roman returned shots in the Uso’s dressing room, and the two fought until Jey, presumably shocked by hearing Reigns talk at an audible volume, stormed out. Roman pointed out how hard Jey has worked over the past year and the opportunities he’s had because of it, and asked Jimmy how he could put his brother in this position. Jimmy seemed contrite as Reigns left to go beat up the Mysterios for the second week in a row.

For the crime of really wailing on his son last week, Rey came out to end SmackDown with a challenge to Reigns for Hell in a Cell, which is absolutely going to rock. He brought out the kendo stick and went to town on the champ, but Roman was able to hit a Superman Punch. Dominik popped up on the apron with a kendo of his own, and still Reigns overpowered him and yeeted a grown man out of the ring. Roman and Rey is a feud I very much want to see, and the Uso drama continues to keep things spicy. Reigns’ soft talking, cousin manipulating, Heyman hanging persona has ruled the brand over the last few months; I can’t say enough about just how good he is in this role. 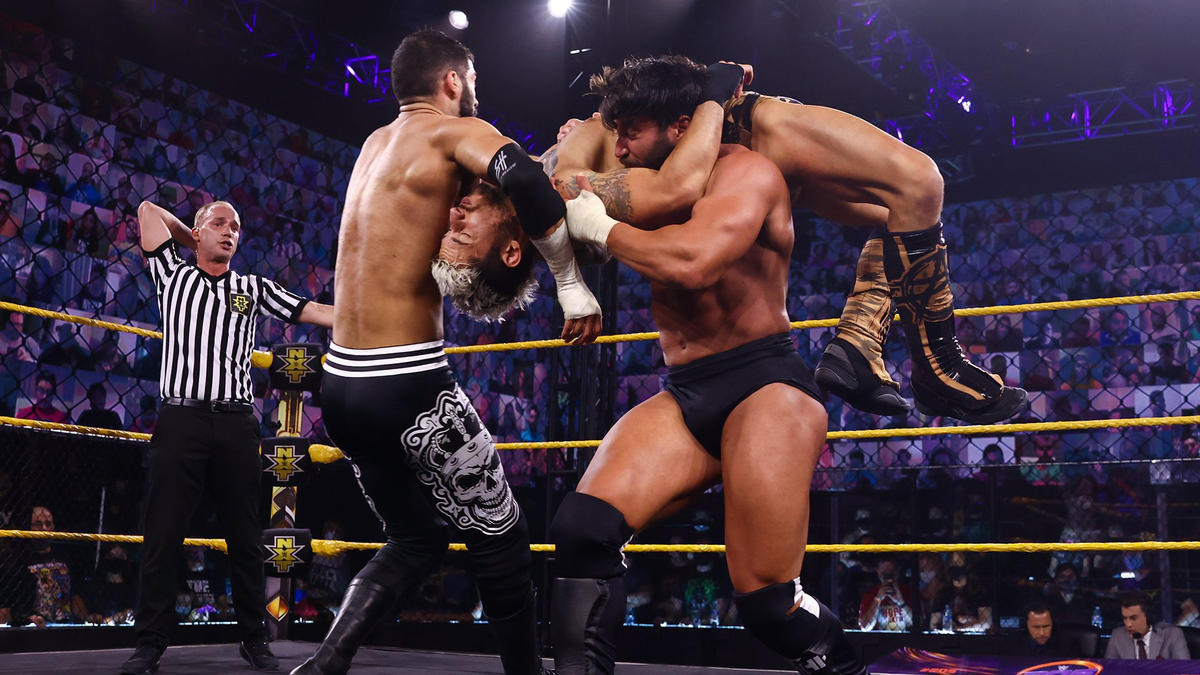 The 205 OGs must be some of the hardest working men in the business, putting over newbies to the show every single week. After nearly 5 years of 205 Live, Daivari and Nese are the only two cruiserweights who started on the brand to still be rocking the purple and orange, and I salute them for their service. This week, they took on the team of Ari Sterling and Asher Hale; Sterling wanted to go high flying early on, but Daivari tried to ground him. Simultaneous dives from Hale and Sterling knocked down the heels on the outside, but back in the ring, Nese turned things around on Hale. The OGs worked over Hale until he could get the tag, and Ari went to town on Nese, earning two near falls in close succession. In a cool move, Hale landed a DDT on Nese using Daivari’s chest as a post, and then later used Sterling’s back to pop up and get a huricanrana on Daivari as well. Ultimately, it was the OGs who prevaled with a double-team finisher for the three count. This was a classic 205 match, pitting cool flippy stuff against two dudes who like to punch things. Hale and Sterling have both fit into the division very well.