Despite literally everything we went through in 2020, yesterday still managed to be one of the more bizarre and unsure days we’ve experienced in recent memory. But as they say in the theatre, the play-fighting must go on, no matter who or what is attempting a coup of the United States Government. It felt more than a little insane to go from calls for invoking the 25th amendment to Karrion Kross’ fog machine entrance, but we somehow did it anyway. Because if WWE has taught us anything, it’s that nothing -no viral pandemic, no public outing of multiple sexual predators in their organization, and no white supremacists invading the capitol- can stop professional wrestling from airing 3 times a week on basic cable. 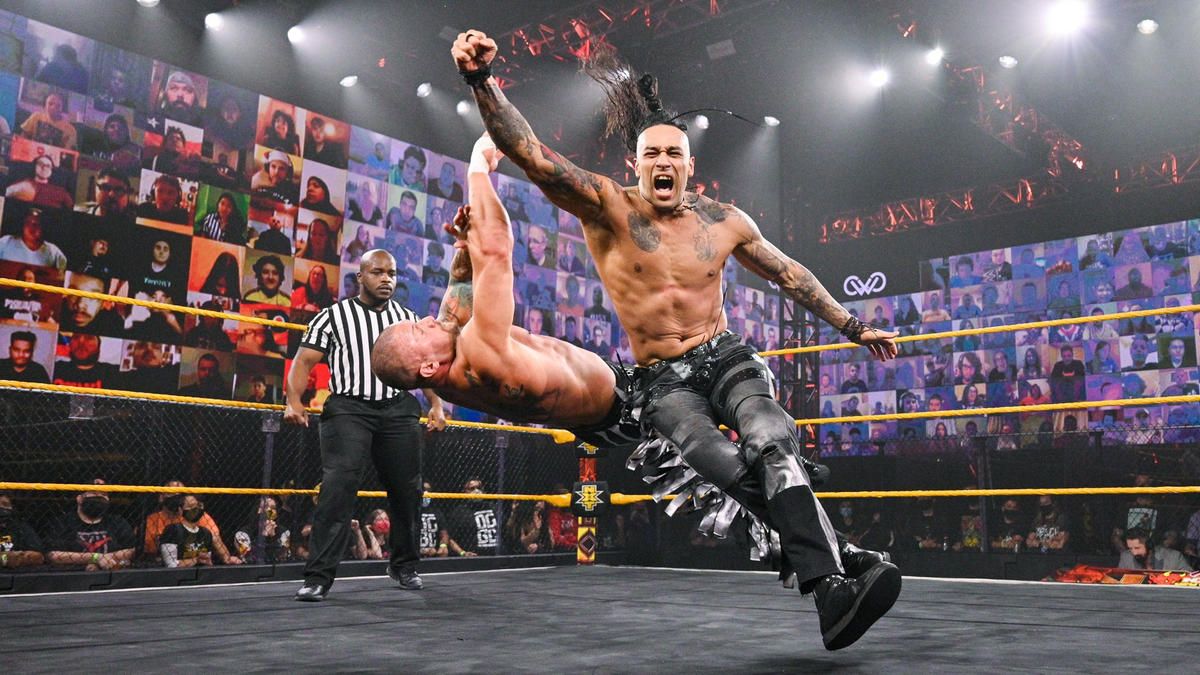 I’ll be honest, this was the match I paid the least attention to. Partially because my brain was still in constantly news checking and texting friends mode, but also because neither of these guys really do it for me. Big man matches are very hit or miss in my eyes, and something about Kross’ schtick just makes me roll my eyes. I shouldn’t even touch on the “Archery of Infamy” because it’s such low hanging fruit, but c’mon. You can’t just put words together because they sound moderately cool.

Anyway, this was solid for what it had to be. Kross was able to overpower Priest and hang him up in the Tree of Woe as he attacked his midsection. Priest escaped and barely hit a Razor’s Edge, but Kross kicked out. South of Heaven got another near fall from a wounded Priest, and Kross hit a big powerbomb to get a 2.5 count. They fought to the outside, where Kross managed to slam Priest into the edge of the stage. He landed a Saito suplex to score the win, and posed very menacingly with Scarlett on the ramp. I can’t say this was riveting for me, but it didn’t outstay it’s welcome, which is often high praise for an NXT match. 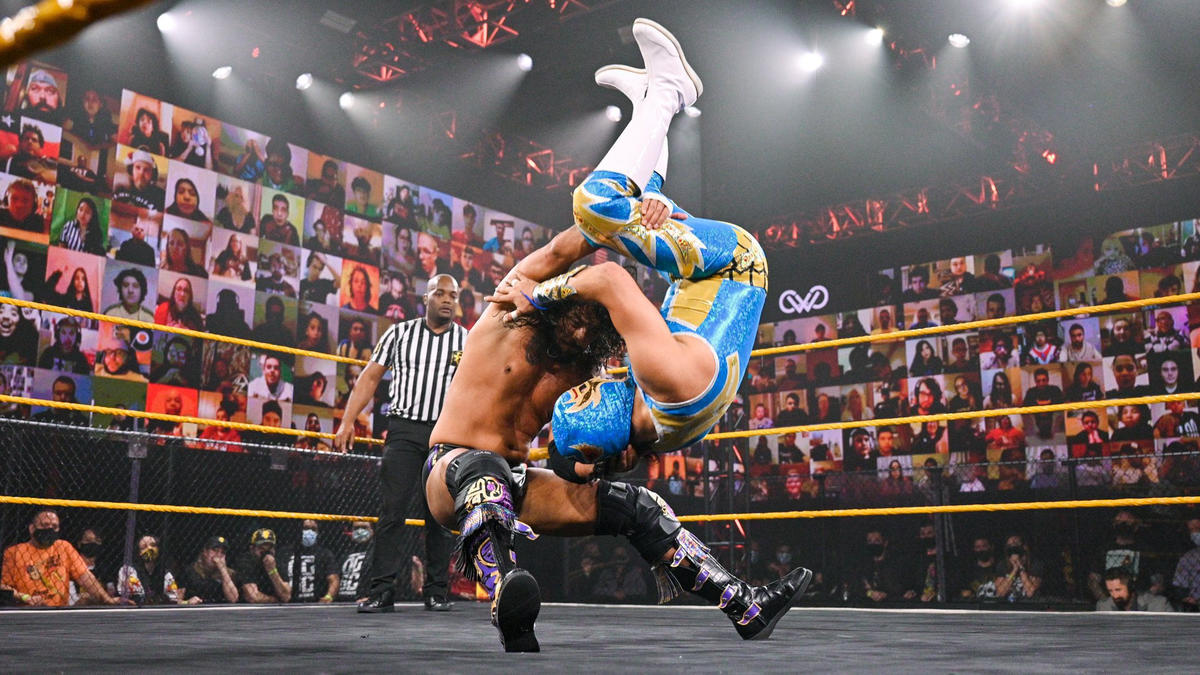 WWE finally had the chance to fix the mistakes of 2016 and crown Gran Metalik Cruiserweight Champion, and on a night where their first purple belt champ was making an ass of himself on Twitter. It really would have been full circle. Escobar started off backing Metalik into the corner, but soon found himself retreating after a hurricanrana. Metalik continued to control the champ with his quick style, including a beautiful moonsault wiping out Escobar on the outside. Santos blocked another hurricanrana attempt and flung Metalik into the barricade to take over. The champ dropped Metalik ribs first into the turnbuckle, but only got a 2 count. Metalik turned a surfboard into a pin on Escobar, forcing Santos to break the hold. Metalik fired back with a drop kick off the ropes, but Escobar hit a jumping knee. A suicide dive to the outside wiped out Metalik, but couldnt get the pin. Legado del Fantasma tried to knock Gran off the top turnbuckle, but Dorado made the save. Escobar avoided the elbow drop to hit Legado and the Phantom Driver and retain his title. There was some slower spots towards the end, mostly it seemed bc Metalik’s mask was in danger of coming off, but this was a great lucha display from two of the cruiserweight division’s most talented. 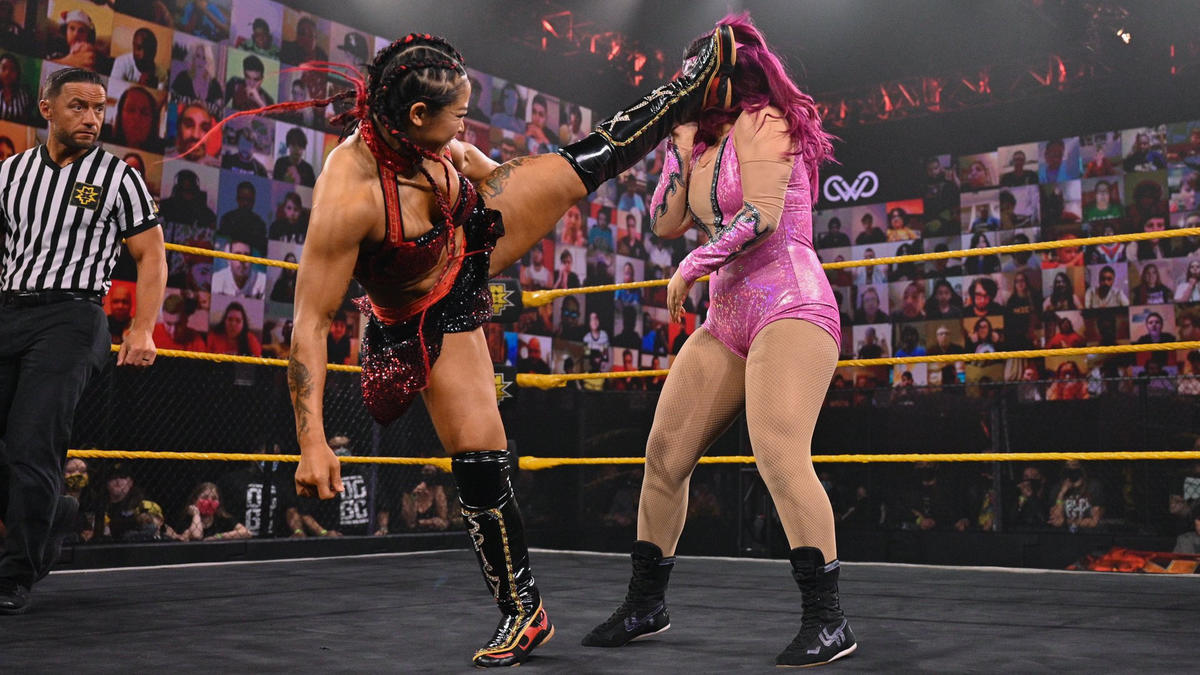 This was Xia Li’s return to NXT after several weeks of training vignettes, alongside Boa and some creepy long haired figure sitting in a light up throne. Poor Katrina didn’t stand a chance. Li seemed impervious to Cortez’s shots, reinforcing her new intensity with some vicious kicks. One to the head knocked Cortez down for the count, and Li stood on the ramp with Boa and their strange friend. Li’s new gimmick could point to a brighter future for her in NXT; she’s fantastic in the ring and has put on great performances. Or, it could be a super weird cult-y revival. Time will tell. 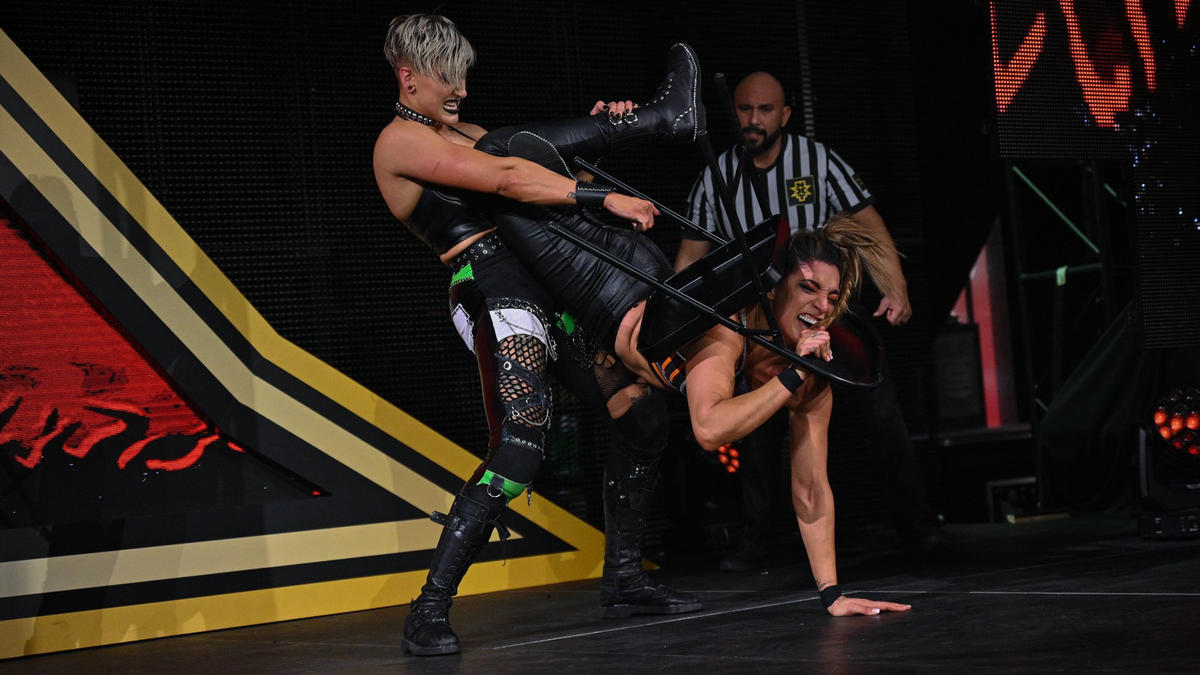 This started out as a brawl right away, both women trading shots and jockeying for position. Gonzalez repeatedly tossed Ripley with ease, an impressive feat considering how many metal chains are weighing The Nightmare down. Rhea grabbed a kendo stick and got in a few shots before Raquel blocked her and went for a chair of her own. She turned the kendo stick on Ripley, but Rhea was able to counter and throw her into the barricade. Ripley handcuffed her to the chain wall and went for the kendo again. In a cool spot, Gonzalez ripped herself free and used the cuff to lay into Ripley some more. She dropped Rhea onto the commentary table and buried her under the debris, but still Ripley managed to dig herself out at the count of 8. They fought to the stage during commercial, with Gonzalez hitting a big boot to send Ripley tumbling through the curtain. Rhea broke a door as she drove Raquel through it, leaving both women down. They continued backstage, wrecking a catering table full of pirate popcorn (delicious) when Ripley hit a senton onto a prone Gonzalez. Suddenly, Dakota Kai ran in with a kendo stick to wipe out Rhea and give Raquel a moment to catch her breath. Ripley smashed Kai into the lockers, locking her up like a jock in an 80s movie. Back on the stage, she tied up Gonzalez with a chair around her neck, but Gonzalez kicked her into the wall. A brutal powerbomb from Gonzalez through the stage finally kept Ripley down for the 10 count. With two marquee wins in recent NXT PPVs, it seems very big things are in store for Gonzalez. 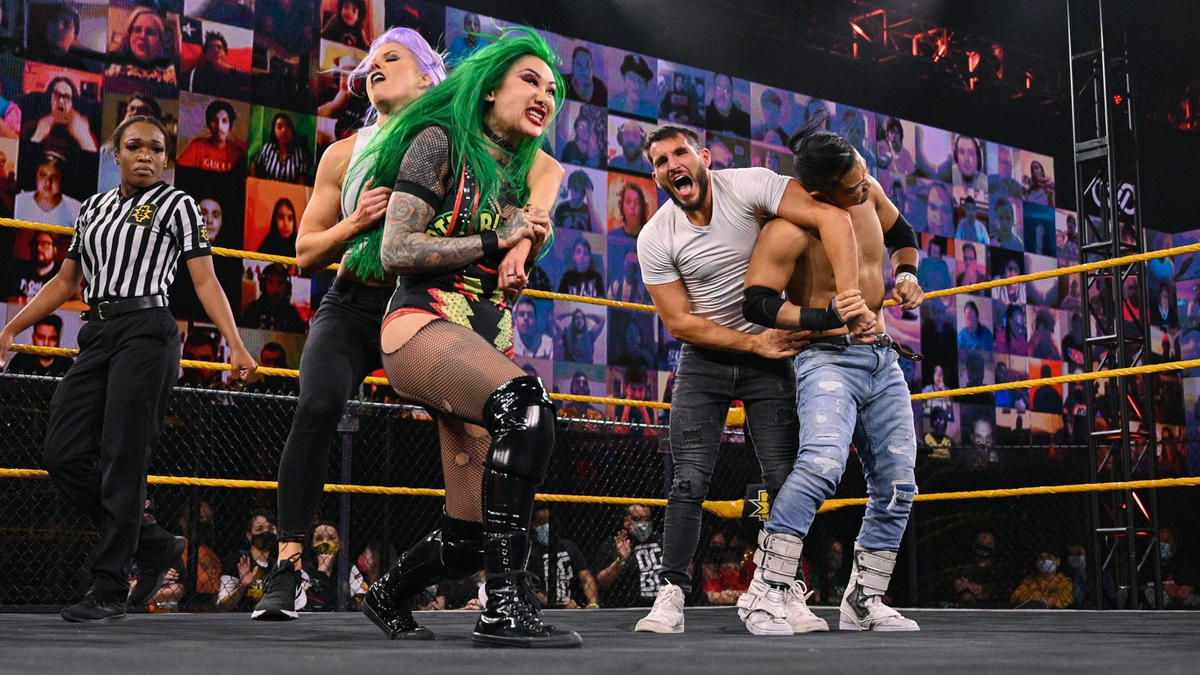 With Timothy Thatcher unable to compete against Tommaso Ciampa, Johnny Gargano and The Way came out to fill up time. Johnny celebrated reversing his title curse with a beautiful plaque from his loving wife, while Indi and Austin gave him a commission of the foursome as superheroes. As Johnny announced he and Theory would be competing in the Dusty Cup, Shotzi Blackheart rode in on her tank to go after Candice. She was backed up by Kushida, and Dexter Lumis rang the bell to announce a mixed tag match. Kushida and Shotzi are a very intriguing tag team, and I now need Kushida vs Candice in a singles match very badly. Candice and Shotzi started off, with Shotzi almost popping LeRae’s arm out of its socket. The guys came in and Kushida took Gargano down. He rolled out of the Garga-No Escape to get a submission of his own, but Johnny just got to the ropes. A sharp right rocked Gargano, but Candice came in to run interference. A double team from Kushida and Shotzi wiped out Candice and Johnny simultaneously, but Theory and Hartwell took them down. Kushida then sent Johnny face first into Theory’s crotch and rolled him up for the win. This was a fun little filler that did exactly what it needed to. The Way is still a horrible name for a group, but it somehow fits Johnny perfectly.

O’Reilly came out hot, dropping Balor with a shoulder tackle. He locked a hold on Balor’s neck, pressing against that previously broken jaw. As a chronic TMJ sufferer, I winced along with Finn. They traded a few more holds, managing to counter each other every time. O’Reilly broke a submission by biting the rope, like a little dog, and Balor kicked the rope to pay tribute to his jaw. He wrenched on Kyle’s neck through the ropes, then landed a drop kick for a two count. He continued to focus on O’Reilly’s jaw until Kyle made a sudden comeback, taking Finn down with a knee to the stomach. After trading shots, Kyle nailed his wacky rope move and bounced back to nail Finn with another strong kick. He got a Triangle hold, but Balor turned it into a pinning attempt. A shot to the jaw forced Kyle to break another submission, and Finn followed up with another kick to the face. 1916 and a crossface seemed like Kyle was fading, but he barely escaped from Balor’s hold. Finn hit a double stomp and tried to follow it up with a Coup de Grace, but was knocked down by O’Reilly. KOR landed a big suplex and a brain buster, but couldn’t get the pin on either. He drove a bleeding Balor into the corner, but Finn fought back with a kick. He locked Kyle in an abdominal stretch and forced him to tap, retaining his title. A kind of anti-climactic finish to a very excellent match. O’Reilly has more than proved he can shine outside of tag team competition, while the Prince scores another solid defense.