If NXT is building back from the ground up, these are two very strong pillars for the foundation

NXT 2.0 is rocking and rolling with a host of new talent and also Tommaso Ciampa, still, for some reason. Alongside Toxic Attraction running the women’s division, the neon lights seem to have pegged some new stars to brighten the path. Carmelo Hayes is one of those very shiny stars; the North American champ helped kick off the new era with a victory over Isaiah Swerve Scott last month. Along with his equally sunglassed friend, Trick Williams, Hayes has successfully put on bangers with whoever he’s stepped in the ring with. He plays the obnoxious heel well, and has proven himself a worth successor to the charismatic Swerve. This week’s performance, once again in the main event as the purported “A-champion”  was no different.

Hayes went one-on-one with Pete Dunne, a guy who enjoys scowling as much as your oldest male relative. Dunne has been a staple of the black and good brand for years and is a welcome sight back in 2.0- especially with a rising star in Hayes. Pete began his journey by beating up all the other UK tournament competitors, and he hasn’t changed a beat since. On the flip side, and unlike Dunne in his first tourney, Hayes was victorious in the NXT Breakout tournament this past year. Which is a nice resume padder, even if it means slightly less than winning the Andre the Giant Battle Royal. It’s the kind of accolade a guy like Hayes is quick to brag about. Boastful, flashy, and rocking some sick shades; Carmelo is the antithesis of the brooding, bashing Dunne. Pete isn’t there to make it look good or pretty- he’s just there to make it happen.

Hayes, on the other hand, thrives off the execution and acknowledgement. He plays it up for the crowd, because the boos and the gasps both mean the same thing for him, and that’s rapt attention. The most excitement we get from Dunne is when he’s snapping joints. His blasé, devil may care attitude towards anything that isn’t finger based violence comes across even stronger when propped up against someone like Hayes, who works for the crowd. He likes to show off with some incredible athleticism, which clashed well against the Bruiserweight’s striking game. He was the perfect flashy heel to a newly face Dunne, employing every tip (and one Trick) in the book to get things done. 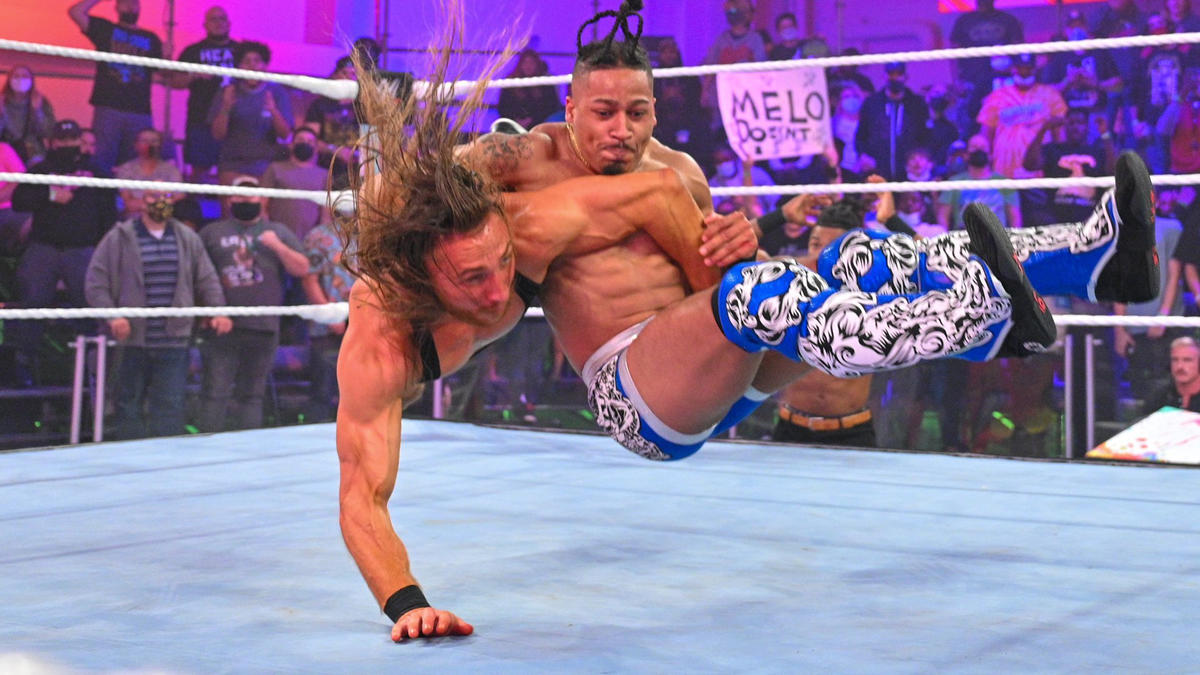 Dunne is a funny case, as his attitude doesn’t change much whether he’s a face or heel. He’s still shrugging at the camera as a nice boy and as a baddie. It’s more about his allegiances; is he coming to the aid of pre-UE Roderick Strong, the helpless Florida man, or is he assisting his bash-happy countrymen, in Ridge Holland? His most recent mean team of Holland, Danny Burch, and Oney Lorcan were there to kick ass and shout vaguely unintelligible British phrases. As a team, they were unfortunately lost in the shuffle of NXT’s multiple stables, but they helped give Dunne the spotlight a handful of times, although his last title match was at Stand and Deliver back in April.

The story on Tuesday night, besides NXT putting on their obligatory one banger of the week, is the stark differences between these two stars. While truthfully not relevant to anything else we’re discussing here, I would like to give a shout-out to Tony D’Angelo for making a metal detector joke and delivering Indi Hartwell a dead fish in a tight 30 seconds in the segment just before the main event. That man is on fire. Dexter Lumis, sans fish, was also on commentary for this match, which was admittedly a funny gag, and also a great blueprint for how much most wrestlers should actually contribute to commentary. But getting back to our talented friends, Dunne and Hayes have very differing styles technically, which lead to some really great moments as they clashed. Pete worked over the arm as Hayes adapted to the ground game, even locking in the Garga-No Escape at one point. Any man who dunks on Johnny publicly like that is a man after my own heart. While Trick tried to help his friend out by running interference at times, Dunne snapped the champ’s fingers solo—or so he thought. After a very evenly matched bout, some interference from Gargano, who grabbed Hayes’ leg, helped Dunne to land the Bitter End and score the win, inserting himself into the North American title scene like the British have inserted themselves in every area of history.

With Holland on SmackDown, Lorcan released, and Burch on the shelf, sending Pete to go it alone was by far the best call. His heroic solo status was highlighted by the constant presence of Williams at ringside, trying to tip the scales towards Hayes, until Dexter Lumis and his father-in-law stepped in to set things straight. A win over the NA champ shoots Pete towards a some marquee match ups in the future, and almost certainly another rematch with Hayes. NXT has made it clear they’re looking to spotlight new talents moving forward into version 2.0, but they’ve got plenty of pre-packaged ones who fit the neon bill as well. Just as Mandy Rose has found new life leading a goth stable, turning a stable-less Dunne face here gives him a new angle and plenty of excellent opponents. He easily works alongside the likes of Hayes, Bron Breaker, and even Ciampa. Carmelo was the right foil to toss Pete back into the mix, a mismatch of style and attitude that produced an A+ match.

Hayes and Johnny Gargano are still entangled, but I’d bet on a Triple Threat gracing our screens at War Games next month. While Gargano remains endearingly terrible alongside The Way, Dunne is the correct pick of the “former” brand stars to push in the NA title scene; he’s got widespread appeal and goes like a rocket with just about anyone. While I certainly don’t want to see Hayes drop the belt just yet, I’d take some Williams trickery to help him cling to the gold over Dunne and Gargano.