One Final Bow: #DIY Dies with a Whimper

The Rebel Heart returns, but Johnny Takeover is long gone

Everyone’s favorite pay-per-view to shout in a vaguely British accent, War Games, is solidly in the past. It was only NXT 2.0’s first TakeOver, but, personally, it feels like we’ve known Tony D’Angelo a lifetime. Like most gimmick matches, War Games tends to be pretty fun just by virtue of the admittedly over complicated rules. No matter how uninteresting the build, it’s always a good time to see eight people throw each other around a set modeled after a mid-00s Sky Zone.

This year’s show was a solid effort; the opening women’s War Games match was an excellent display of talent, both in ring and medical from Io Shirai, and we even got to see Duke Hudson get a free haircut. I’m a big advocate for more hair vs hair matches across the board, but it’s hard to get hype about a poker-based feud, unless you’re my uncle or that one friend who’s super into online betting. We even got a final banger and a send-off for Kyle O’Reilly, along with a victory for his former stablemate, Cruiserweight champ Roderick Strong.

By the time the main event rolled around, we’d gotten a solid mix of 2.0 and black and gold. Newcomer Cora Jade scored the victory for her team in her very first PPV match, but it was NXT originals like Cameron Grimes and Strong who picked up victories as well. The men’s War Games match, a literal battle between NXT’s past and present, couldn’t have been more on the nose if it tried. The outcome felt obvious from the get go, regardless of what happened in the ring, who looked stronger or pulled off the bigger spot; 2.0 had to win.

It’s hard to remember now, but there was a time where Gargano and Ciampa were the hottest thing in sports entertainment. That feud captivated a Full Sail audience like nothing else in 2018, highlighting what might be the golden era of the black and gold brand. The two first teamed in 2015 for the inaugural Dusty Rhodes Tag Team Classic, where they lost to Baron Corbin and Rhyno, a team no one has ever thought about since.

But the indie darlings quickly became favorites, and #DIY became NXT tag team champions. Things were going swell, until the two lost the tag titles to AoP. After another loss to the two future disciples of Seth Rollins, Ciampa turned on his buddy in one of the more shocking betrayals in recent memory. The feud was red hot at the beginning, with fans unable to get enough of the duo beating the crap out of each other. 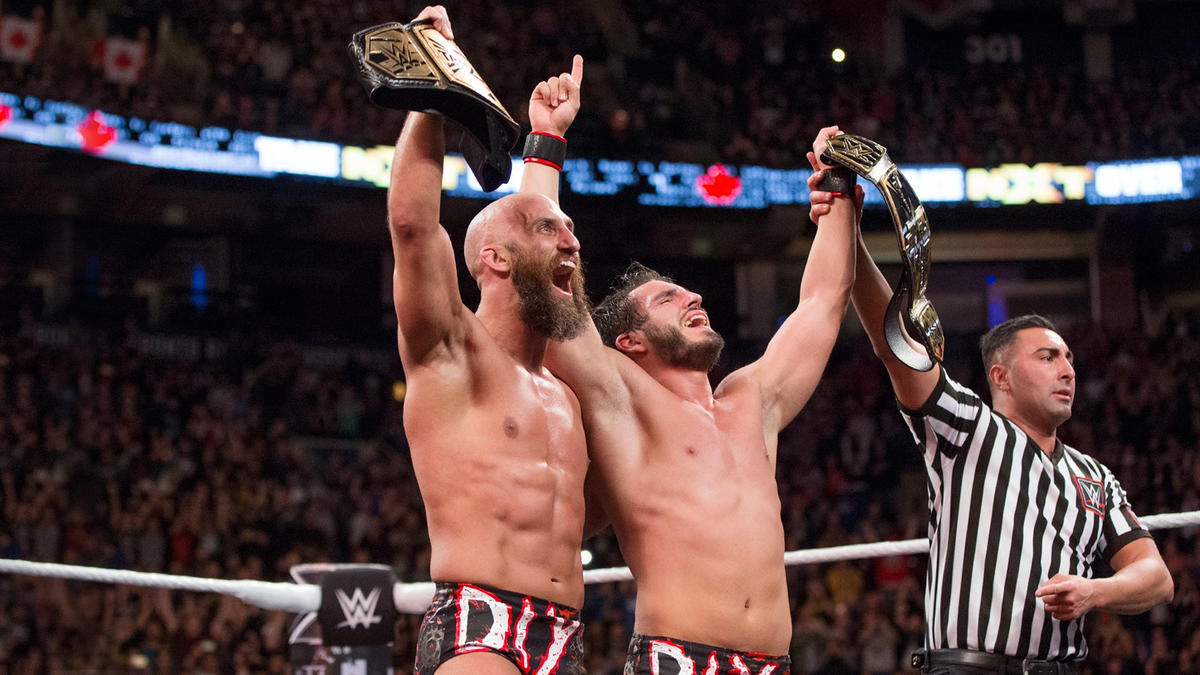 2018 was a different time in terms of beloved wrestlers, inside the ring and out. Guys like Johnny, Tommaso, and Adam Cole could simply do no wrong. WWE might crap the bed with a big PPV, but the TakeOver on Saturday night was always sure to delight. It was formulaic, with its 40 minute main events and constant near falls, but it was almost always a good time. It’s hard to name an exact moment when the show started to slide; I’d blame a good chunk of it on continued reliance on the Gargano/Ciampa story, which should have reached a natural conclusion somewhere before their 16th match.

Whatever it was, suddenly there was a shift in general attitude towards NXT. Instead of being praised as WWE’s best brand, it was more often lumped in with Raw and SmackDown as an over bloated and overbooked mess. It was the same people tossed around the title scene and the same stories used over and over, and nobody wanted to see them anymore.

And thus, after dragging out the same show for as long as they absolutely could, NXT 2.0 was born. And now we have crowd favorites like Bron Breakker and Carmelo Hayes, instantly memorable faces and gimmicks like Tony D’Angelo and Cora Jade. The old guard was still there (Ciampa was, somehow, still champion) but you could tell the newbies were being earmarked for success.

This is a different style of NXT, one that leaned away from what had made the Gargano/Ciampa era so significant. It no longer mattered if you could wrestle a 40 minute match with as many spots as humanly possible. That’s not to say these new stars don’t have in ring talent; Hayes can wrestle circles around most of the roster, and Breakker is the beast he was promised to be. It’s just that their character can no longer be “guy who was good on the indies.”

Maybe I’m shortchanging Gargano here; his work with The Way over the past year has been some of my favorite stuff from him. But look at Adam Cole and his recent work since going to AEW. He’s always had charisma by the ton, which helped make Undisputed Era the golden boys of NXT. But AEW’s already embraced the goofy, ridiculous humor that he nails so well. Having him feud with Orange Cassidy, a gimmick neither NXT or WWE would ever have known how to handle, has been wildly different from the UE era.

O’Reilly and Strong got to be the silly ones there, while the show seemed afraid that if Cole was too goofy, he’d lose credibility as a champion. It’s a full topic for another time, but WWE has always struggled with wrestlers who are organically funny. Probably because their own brand of humor just doesn’t jive with being naturally hilarious. So instead of letting Cole really tap into that—and I mean genuinely, not the wise cracks and one liners he delivered—didn’t match up with their idea of who a Champion is.

Gargano has recently tickled his funny bone with his stint as the reluctant father figure of rebellious late 20s Indi Hartwell, but this was notably after he was removed from any genuine title consideration. The Johnny who held a death grip on the NXT title scene in 2018 and 2019 was a far cry from the Gargano we’ve seen recently. I didn’t experience Johnny Wrestling outside of WWE, so I can’t say I feel one way or another about that. But the guy we got main eventing TakeoOver after TakeOver had a very short shelf life, even if NXT didn’t seem to accept it. The Rebel Heart was fun, until you realized it was all you were going to see for every single show. When Gargano finally made a heel turn and some character progression in late 2019, it was too little too late.

Ciampa is as essential to the black and gold era as John boy; his story, unfortunately, just involves more time out on injury. The original planned feud for #DIY was first derailed after Ciampa sustained a neck injury, setting in motion the trail of rematches that eventually lead us to One Final Beat last year. A two time champion, a guy who used to cut his entrance music so he could come out to a chorus of boos, Ciampa was a measuring stick for anyone who thought they could make it to the main event. He was the NXT heel, the worst person to set foot in Full Saul (except for all the people we later found out did shoot terrible things).

We loved to hate him almost as much as we hated to love Gargano. But, just like Johnny struggled to fit in this new era, Tommaso doesn’t click quick the same as he used to. This hasn’t stopped him from continuing to hold onto the NXT Championship for somewhat inexplicable reasons, but I guess we gotta give Bron Breakker something to keep reaching for. Ciampa is still excellent in the ring, but “gruff vet” doesn’t translate the same beside Hot Rich Girl and Possessed By Demonic Spirit of Former Trainer. 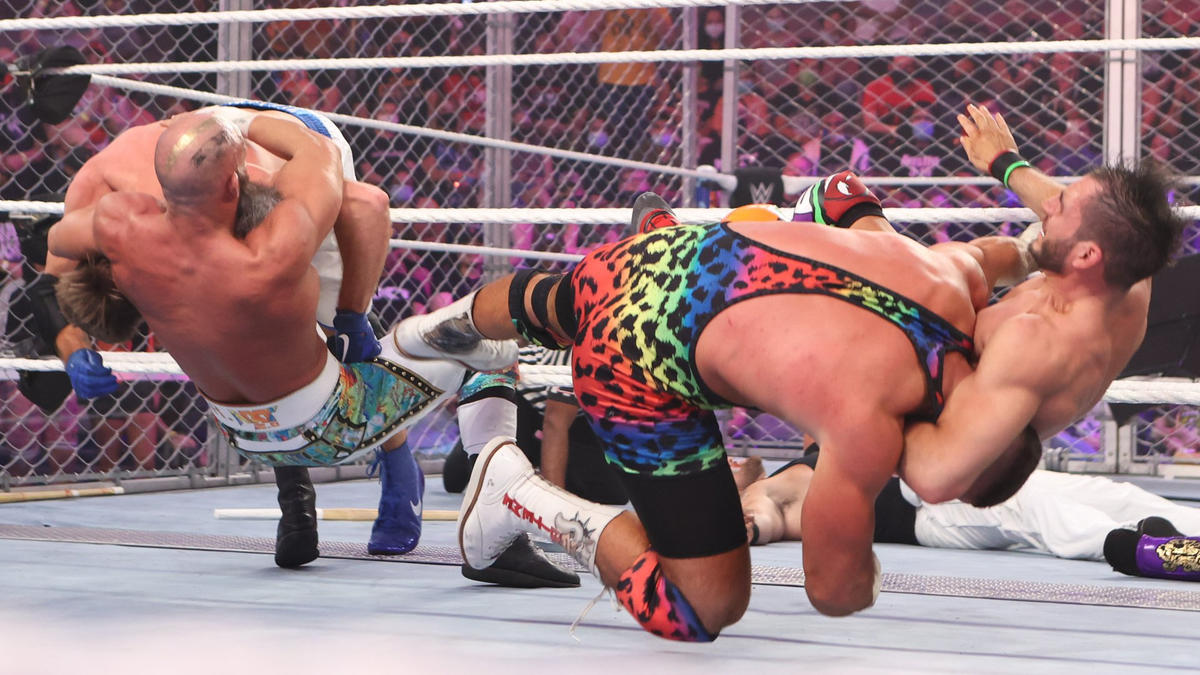 And so DIY found themselves here, caught between the future of NXT and LA Knight, defending a brand that no longer exists. I almost wish we’d gotten to see more of them in this role, as two has-beens who desperately refuse to admit their time is over, because both guys—Gargano especially—played it very well. But there comes a time where everyone has to accept their (black and) golden days are behind them.

The full match made perfect use of Ciampa and Gargano’s relationship, playing up their teamwork for potentially the last time. In the final moments, DIY hit their finisher on Breakker once more, and would have won it all to return us to 2018 and save the world, but the count was broken by Carmelo. This allowed Breakker to slam Ciampa and get the win for youth everywhere. The old guard metaphorically, symbolically, and literally defeated.

On Tuesday night, Johnny came out to issue an official NXT farewell and shed some unofficial tears. I don’t hate the idea of seeing him move on, wherever that may be (that’s a joke, it’ll be AEW and we all know it). I can’t think of a more definitive end to Johnny TakeOver than watching him take an L for the brand that he gave his blood, sweat, and winking neutral face for. We’ll blast some Paramore and spend too much money on Funko Pops in his honor.