There was so much wrestling on last night that it almost felt like normal times! Remember when you had to guess which show had the weird and improbable result everyone was mad about? I mean, it was usually just WWE, but you could only be 99% sure.

Interesting mix of results for last night’s TakeOver. The show started out strong enough, but really lost some speed in a lackluster main event. A controversial end to the PPV may have left a sour taste in some mouths, but let’s break it down: 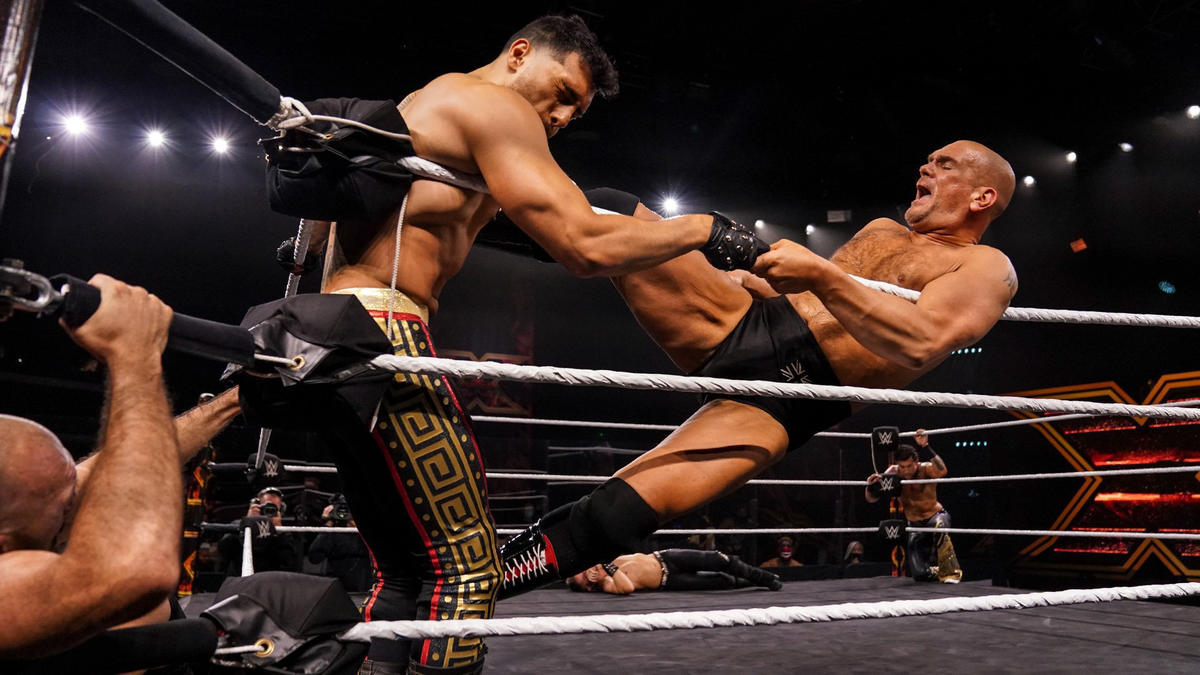 Cruiserweights are back on the preshow; nature is healing. I enjoy all these teams, so this was a good opener in my book. Lots of high flying from Legado del Fantasma early on, followed by Oney Lorcan punching people in the face. Breezango and Legado both got some near falls, with Mendoza landing a great standing Spanish Fly halfway through. The finish came when Lorcan hit Wilde with an uppercut, and Breeze got in there with a Supermodel Kick to win for his team. Breezango’s run at tag team gold has long been over due, so I’ve got no complaints here. 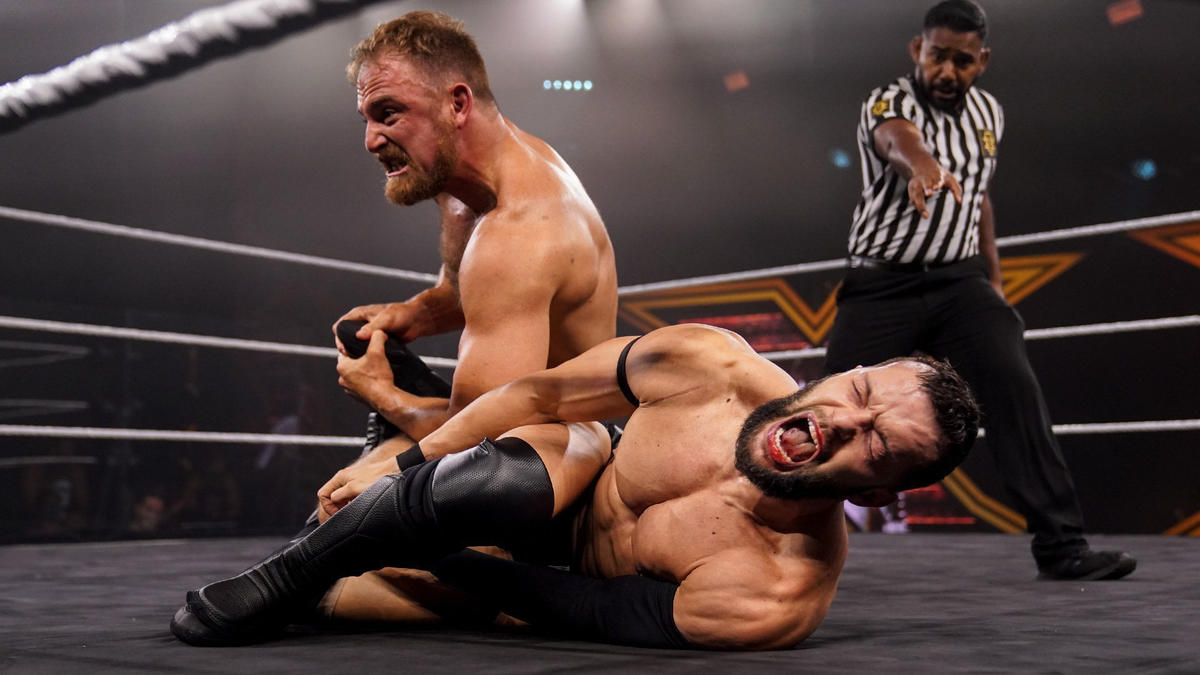 It’s Timothy Thatcher, it’s not like I’m gonna have a bad time watching this. I’m admittedly no Balor connoisseur, which may be why I was a little surprised to see him hold his own in grappling, but the two complimented each other really well here. They traded submissions and strikes, with Thatcher managing to ground Balor every time he tried to take things off the mat. Finn managed a double stomp to the chest to slow Thatcher, but missed the Coup de Grace and landed awkwardly on his leg. Timothy took advantage, trying to twist the leg in a single leg Crab, but Balor forced a break. Thatcher looked for another submission, but Balor evaded and landed another double stomp. He climbed up for another Coup de Grace, then hit 1916 for good measure to win. This was a great effort from both men, and a fun way to open the show. I wish it stayed this engaging throughout. 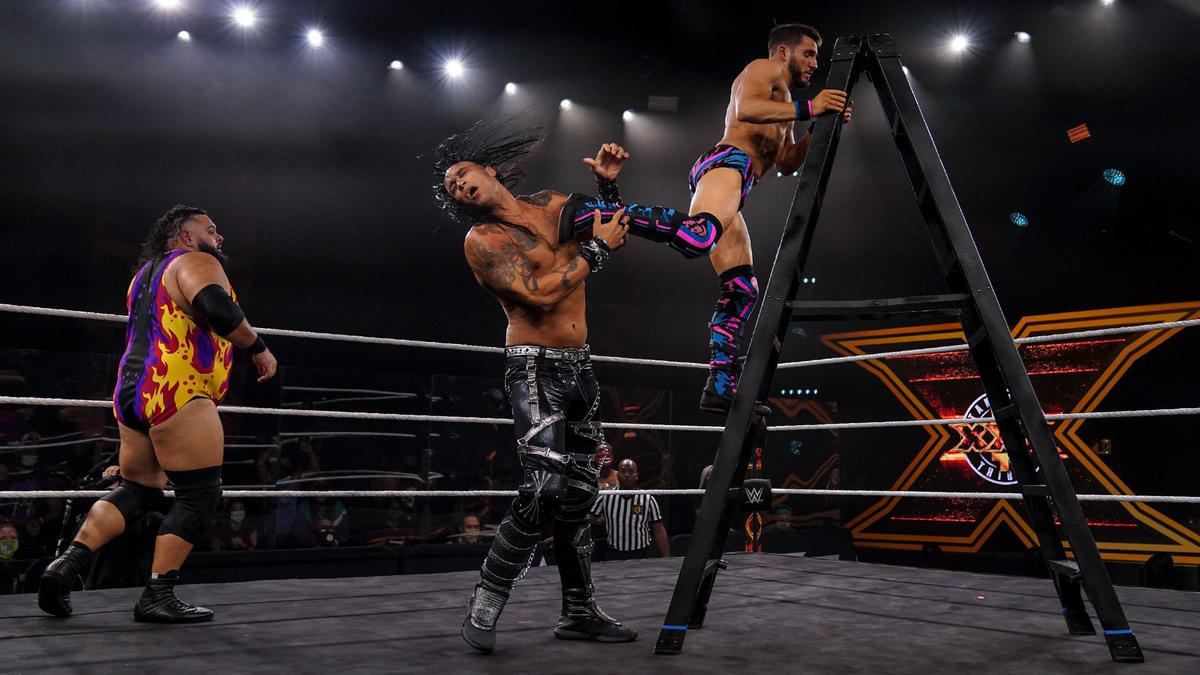 This match was fine, if a little bloated by the need to cram as many big spots in as possible. It did have all the best parts of ladder matches, which are, in no particular order: wrestlers forgetting how their legs work, wrestlers forgetting any concept of depth perception, and big dudes jumping off the tops of ladders. It also unfortunately included Velveteen Dream.

I loved Bronson Reed here, who destroyed everything and anything that came his way. I also, surprisingly, really enjoyed Gargano. His smarmy heel persona really works for him. At one point, he convinced Priest and Reed to attack Grimes and Dream down in the corners, while he attempted to climb the ladder behind their backs. Priest was a target early on as one of the two big men in the match, but he hung in there and hit a big spot, scaling a ladder and hitting a dive to everyone on the outside. Grimes took advantage of everyone else getting wiped out to try and get to the belt, but Candice LeRae came in to stop him. With Johnny’s assistance, she hit Grimes with a huricanrana, then jumped on Reed’s back to keep him from grabbing the title. Reed grabbed her arms to hold her in place as he delivered a huge splash to Gargano from the top of the ladder. I appreciate NXT’s devotion to making Johnny and Candice your least favorite couple in the world, but her involvement here felt a little unnecessary. Ultimately, it was Gargano and Priest who climbed the ladder at the same time and each grabbed hold of the title. Johnny let go long enough to be shoved off the ladder, and Priest pulled the belt free. He later celebrated by jumping into a hot tub in his full leather gear, which sounds like some kind of infection waiting to happen, so good luck with that. 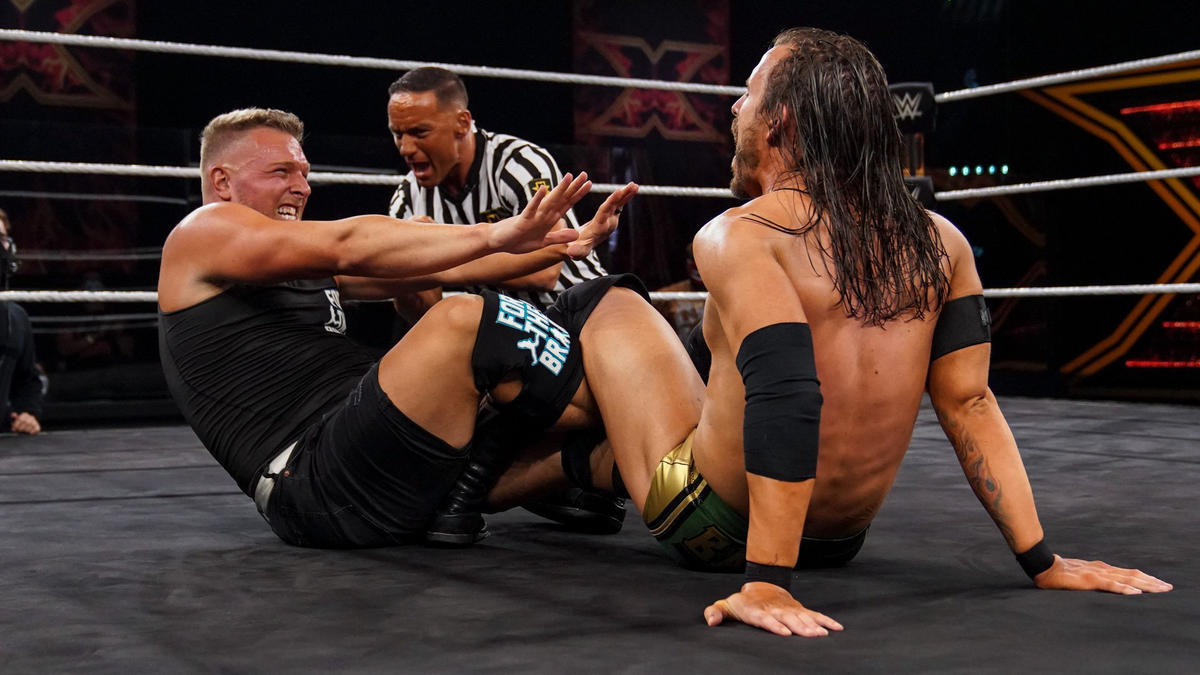 This was probably the best non-wrestler match we’ve seen in a while, and most of that is down to McAfee. Cole certainly bumped like a champ for him, but McAfee clearly did his work for this one, and he looked like he was having the time of his life out there. I can’t fault it harshly for that, because even though he looks like he gets typecast as a serial killing stepfather, McAfee seems like a good dude who genuinely wants to play more of a part in wrestling. If this was anything to go by, he really has the drive to learn the NXT style. He showed off some great athleticism and even hit a Swanton off the top turnbuckle onto UE and ring security. It seemed like McAfee was going to get the win multiple times throughout, but even after he landed a punt to Cole’s chest, the former NXT champ kicked out. Cole thought about the Last Shot, but instead proved that he reads my tweets by putting away his knee and climbing the turnbuckles to land Panama Sunrise and win the match. I’m generally not really invested in “celebrity” matches, but McAfee put in a good effort, and Cole was entertaining as always. 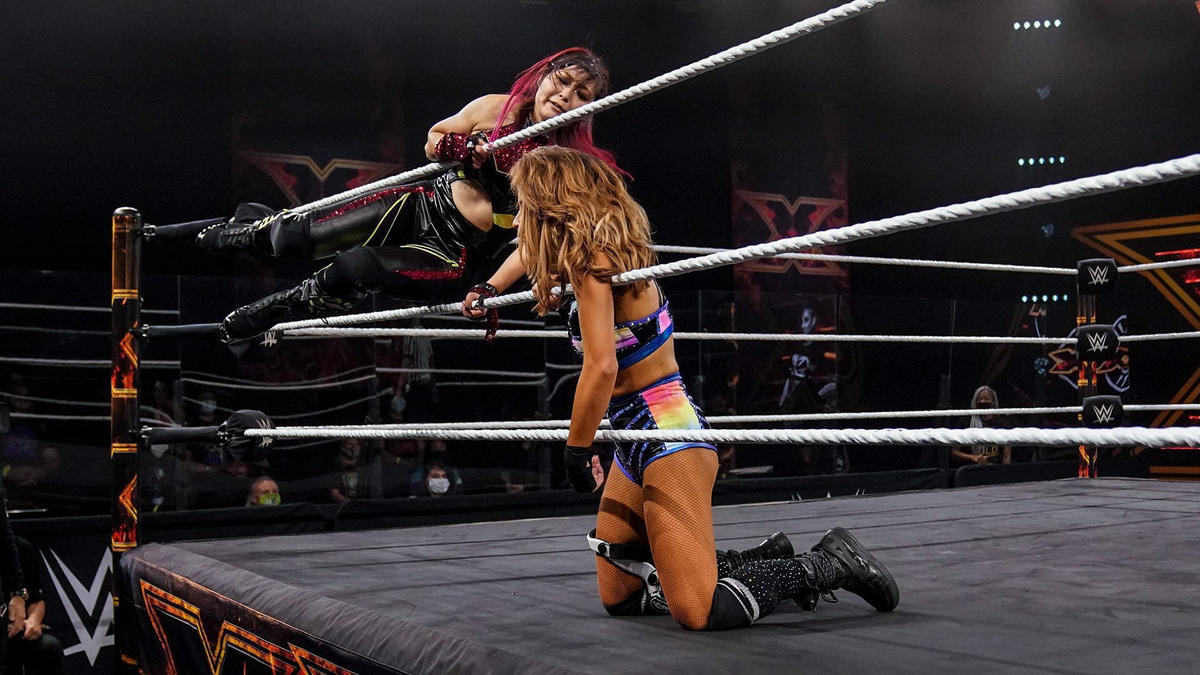 Io Shirai is one of the most consistent wrestlers NXT has; she can really turn out a banger with anyone. This was no different, as her selling and defense really helped Kai come across as ruthless in her attack on the champion. The two worked together really well here. The match flew by for me, although the ending did feel a little pointlessly convoluted: Kai accidentally kicked the ref and knocked him out. Shirai, who didn’t seem to notice the unconscious ref somehow, laid her out and then hit a moonsault, but there was no one to count. Raquel Gonzalez ran into attack Io and drag Dakota into the cover, but the champion still kicked out. Shirai hit another moonsault on the outside, then a final one in the ring to seal the deal, as a groggy referee counted to 3. Post match, Gonzalez went after Io again, but Rhea Ripley came out to make the save, and the two tall ladies had a staredown. Kind of a sad statement for Kai as a character that she can’t win even with 6’ backup and the ref out of commission, but she did put on a solid showing against Shirai. Who, literally, can’t do any wrong in an NXT ring.

The real bummer here came at the end, but I feel like the journey probably should have been more enjoyable. Something was off in the chemistry or the execution, but this match felt about three times longer than it was. There was a lot of focus on Kross’ strength and aggression as he dominated much of the match, putting him over as our next monster heel. That’s fine, and it’s a role he can occupy well, but the match as a whole really just never seemed to click. Kross kicking out of the Spirit Bomb should have felt like a big moment, but it was barely surprising after he easily dominated the larger Lee for so long. Lee tried to climb the turnbuckles, but Kross caught him and hit the Doomsday Saito to win. I dig the spooky magician schtick and all, but it just feels far too early to make Kross the top guy. Even just one feud before taking on Lee would have helped solidify him in the brand. Speaking of Lee, it feels absolutely criminal have him act like a transitional champ. I know WWE is bad at booking face champions, but everybody loves Keith Lee. It’s not like it’s a challenge for people to root for him. I don’t know if they wanted his run as NXT champ to be like a victory lap before he inevitably ends up on Raw/SD, but it just feels like wasted time. Lee deserved an impactful reign as champion; this seems more like a cheap consolation prize.