The mat is sacred, and mid-card titles can be too

The man formerly known as Big Daddy WALTER changed his name way back in January, setting the stage for a graduation to the main roster, alongside fellow European friend Ludwig Kaiser (previously Marcel Barthel). After squashing a couple of local talents and Drew Gulak, Gunther set his sights on the Intercontinental Championship.

Then champion Ricochet came out to assist Gulak in fighting off the Imperium invasion, leading to a tag team match between the four men. Ludwig did a lot of the heavy lifting there, while Gunther just stood menacingly on the apron. After being humiliated by a couple of blonde guys, Ricochet was willing to put his belt on the line against the Ring General.

Both men delivered an excellent match, and this was maybe the best Ricochet’s looked in a good long while. Gunther had the clear power advantage, leaving Ricochet to rely on his speed and some very flashy moves. This was Ricochet’s most babyface match in recent memory, although it’s hard not to be the plucky underdog against a guy with chops that make me tear up a bit.

Ricochet fought a good fight, and he even got away with a handful of hope spots as he attempted to knock the big man down, but the outcome of this one was clear from the first note of the knockoff “Symphony No 9.” With Ludwig at ringside, a hot crowd very much behind him, and a massive powerbomb, Gunther cinched his first main roster title.

It makes sense in a lot of ways; Ricochet hasn’t had a ton of impact as Intercontinental champ, although I can’t blame him for that. The company picks and chooses when to care about their midcard titles, and his run took place during an off-season. He won the belt from Sami Zayn — who I also forgot was champion at the beginning of this year — then defended against both members of Los Lotharios right before Mania. There was also a match with Jinder Mahal at some point, but I couldn’t recount it if you asked me.

All in all, it was a largely forgettable run for a guy who has consistently been shafted by both main roster brands.

On the flip side, I imagine even the most tuned out fan has some idea of who Gunther is, although they may have blacked out the entirety of his NXT UK run. He’s the kind of big powerhouse WWE needs right now; a genuine monster heel who can demolish anyone in his path. Putting the title on him seems like a foolproof plan for success, a rocket strapped to an appropriately rocket sized man.

Of course, since WWE’s favorite activity is taking something good and seeing all the ways they can make it worse, we had an immediate repeat of this PWG classic on Friday. Unfortunately, the do-over was significantly less exciting than the first go around, even if it accomplished the same result.

This match gave Ricochet far less to do; while Gunther dominated their first bout, the One and Only was able to get in some brief offense at times. Gunther excels at opening that door and giving his opponents the briefest of chances, before swinging it shut with emphasis. This was just the opposite, running under 4 minutes and giving Ricochet about 15-20 seconds of potential hope. 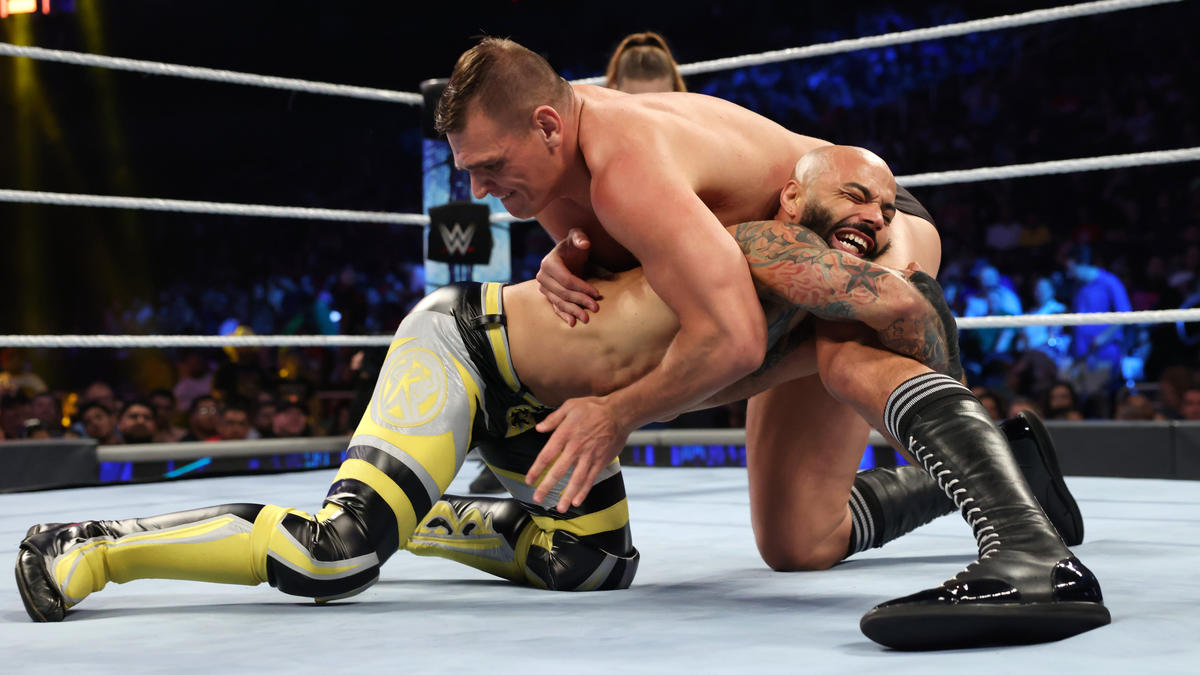 Conversely, it did succeeded making Gunther look like an absolute machine. He turned Ricochet inside out with a clothesline, laid in with those devastating chops, and even gave him a vague attempt at a half crab, a move that mostly looked like a very large child dragging a doll across the mat.

For his part, Ricochet sold like a champ here, bumping harder than most refs after a strong tap on the shoulder. He was really giving his all to make Gunther look as impressive as he did, which is sort of a sad end to a pretty lackluster Intercontinental Championship run for Ricochet. In case you’ve forgotten — I had — Rico didn’t even make it on the WrestleMania card for a two night, 10 hour show. I can’t imagine WWE affording Gunther the same treatment at a big 4 premium live event, especially not after such a dominating push to start his SmackDown career.

It’s unclear where our favorite bald man will end up next; Ricochet’s main roster career is as back and forth as they come, and there’s no guarantee he’ll even feature in another feud until next year. Luckily, Gunther’s position seems a lot more secure, at least, for the time being.

I frequently struggle to give WWE their flowers, but SmackDown seems to recognize how they’ve got to market both Gunther and Ludwig. Unnecessary name changes aside, the duo debuted with just the right amount of momentum, and the blue brand has allowed them both to shine in this partnership. Kaiser’s introduction of the champion makes him feeling like the big deal he is, and his symphony conducting on the outside is a pretty good bit too. He got his chance to show off in-ring during the tag match against Ricochet and Gulak, where Kaiser nearly worked a handicap match and still came out with the win. The previous NXT and NXT UK tag champ has plenty accolades of his own, but his devotion to playing manager/announcer/buddy support isn’t wavering either.

Gunther seems set for a monster heel run straight to SummerSlam, and I can’t deny that I’m excited for it. This is the kind of talent WWE has struggled to maintain: guys like Strowman, Lars Sullivan, etc. Whether through booking decisions or just the inability to hold up under any kind of scrutiny, the appeal of these huge dudes throwing chairs at each other seems to wear off sooner rather than later.

Gunther stands out among your typical big boy heel as someone who can move just as well as he hits. He relies on his technical skills over his size, and his devotion to the sport is what keeps him in line. A bad guy with a cause is far more appealing than a meanie who just beats people up, and these two have all the reason in the world to want to whip SmackDown into shape.