Forget blue vs red, this was all about blue vs neon green

WWE somehow handed out even more releases last week, directly before one of their biggest shows of the year, again citing budget cuts. I’m beyond trying to figure out how this company rationalizes things. I have faith the talent will land on their feet in other promotions; John Morrison made a zombie lumber match work in the ThunderDome, I can’t wait to see what he can do elsewhere.

Even putting aside the absolute shiftiness of cutting 80-some people during a year where you’re making record profits and a global pandemic is still happening, I’m one of the idiots who regularly watches this product, and seeing this many people disappear is kind of terrifying. They’re supposed to scrape together thirty whole men for a Royal Rumble in a few months. Even factoring in a chunk of guys from NXT, you can’t necessarily count on Reigns/Big E/etc, who will be defending their titles. I guess it’s not really my problem, but I don’t want to have to watch a Madcap Moss comedy routine for thirty minutes because there’s nothing else to fill time.

Anyway, WWE still had to prepare their dozen remaining wrestlers for Survivor Series this week. It’s a shame that this company is such absolute shit, because they’re actually delivering some compelling stuff right now that absolutely no one wants to watch. Reigns and Woods is such a rewarding feud that brings the well deserving king into the spotlight, and Roman is the perfect asshole jock foil to his genuine energy. Throw in E vs Reigns this past weekend, and things are really cooking. A more surprise hit from SmackDown lately has been Shotzi vs Sasha Banks, two members of Team SmackDown who want to rip each other’s limbs off.

Kiss and (don’t) make up

Surprisingly, SmackDown is managing to juggle several women’s feuds; Charlotte and Toni Storm, Charlotte and Becky, Naomi and Sonya Deville feat. Aliyah. Shotzi, who’s still finding her feet on the blue brand, attacked Banks several weeks ago after losing a match to Charlotte. If I were Sonya, I’d probably go with two women who don’t hate each other, but this is a dwindling roster. This lead to Friday’s match between the two, which Deville made them promise would end in kissing and making up. Spoiler alert: it did not.

I was first introduced to Shotzi, neé Blackheart, two years ago at a GCW Halloween show. The Ballsy Badass lived up to the nickname, unafraid to bust heads with the best of them and riding around in a mini Party City tank, threatening the toes of any fan who stood too close to the aisle. Blackheart was a scrappy underdog, the one you couldn’t help but root for with her neon hair and take-no-prisoners attitude.

When she arrived in NXT they probably couldn’t say “balls” on USA network, but the attitude stayed the same. Shotzi kicked ass and took care of business, yet NXT never quite seemed to “get” her. I’d argue the most OG Shotzi we got was when she hosted Halloween Havoc in 2020, dressing as horror icons and threatening to cut people with a chainsaw. That Shotzi, weird and wacky and wonderful, shone through occasionally in the ring, but the black and gold brand never really seemed interested in helping her find her groove.

She had a brief partnership with Ember Moon, which brought Team TCB (did we ever find out what that stood for?) the NXT women’s tag titles, her first gold with the company. And yet when she was brought up to the main roster, it was with Tegan Nox, who she hadn’t teamed with before. The two were fine enough together, even challenging for the women’s tag titles before suddenly being split in the draft. As Shotzi arrived on SmackDown, eager to make a name for herself, who else was there to welcome her but The Boss? 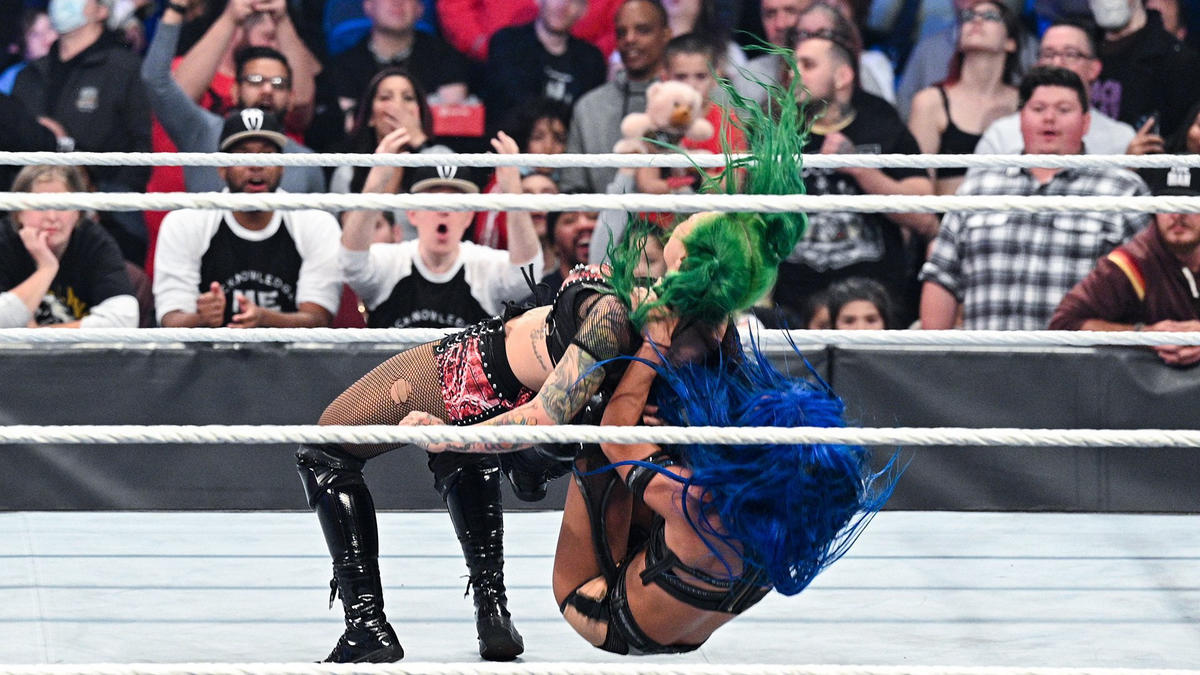 Banks has had another banner year, and she didn’t even appear in Star Wars over the past twelve months. Main eventing WrestleMania, returning to a huge pop and kicking Bianca’s ass this summer, appearing in the most high profile women’s match to occur in Saudi Arabia, Sasha’s checked a lot of boxes this year. Flair may be the SmackDown women’s champ, but Banks is the female face of the brand. Her accolades in WWE speak for themselves, but her run this year has been unique.

Banks has been a face and a heel many times over, but this year has seen her lean into more of a tweener phase. Going against Bianca at Mania, in such an incredible match for its content and its place in wrestling history, it was hard to make her the clear villain. Yet, she was against the perennial baby face in Belair. Everyone -and I meant everyone- wanted Bianca to walk out champion. So when Banks came back and showed her true colors with a Backstabber to her former friend, no one was all that surprised. Fast forward to the end of October, and Shotzi handed Sasha some of her own medicine, with a mouthful of tank and a knife to the back. This left Sasha in a new position; she was the one who had been wronged. She wasn’t quite a face, as she still paraded around with all the arrogance of someone who knows how badly the rest of us want to meet Baby Yoda. But Shotzi was the “mean” heel, the trash-talking one who wanted to make a name for herself at Sasha’s expense.

What worked best in last Friday’s match was the heel vs heel factor, a match up WWE is often scared to book. Both women are more than capable of pulling out their dirties tricks, and they certainly weren’t afraid to tap into that viscous side; in one spot, Shotzi trapped Banks’ arm in the steps and wailed away on it, culminating in a howl worthy of a Warren Zevon track. The crowd started to get behind Banks throughout the match, cheering her on after a near fall and a 2.5 second kick out. With Sasha’s recent track record, it’s hard to know how we feel about her. Her attitude hasn’t changed; she’s the boss, the blueprint, the Mandalorian. She’s as cocky as ever, but when she’s backing it up against Shotzi -the newcomer, the one who was never given that heroic spotlight in NXT, much less already on the main roster— people get behind her.

Shotzi continued to work over the arm during the match, but a split second hesitation lead to Banks getting her in the crossface with her good arm and leg for a tap out. Sasha then offered a handshake post-match, but quickly turned things around into the Backstabber, letting us know she’s still up to her classic Boss ways.

This was the perfect use of Banks, who is in between feuds right now. As captain of Team SmackDown, she’s been a right pain in Sonya Deville’s ass, but she’s teaching us an important lesson in staying true to herself. Sasha Banks cares about Sasha Banks above all else; more than Team SmackDown, definitely more than pleasing her well-dressed boss. Keeping the peace with Shotzi doesn’t even rank in the top ten on Sasha’s to-do list. Banks plays self assured better than most, and giving her the unfamiliar match up of Shotzi just before she leads the blue brand to victory was the right call. Shotzi is growing more confident as a heel, upping her trash talk and making those howls sound as menacing as possible. Sharpening that edge against someone like Banks offers us the best of both worlds; a surprisingly vicious match for the likes of Friday at 8:50, and the chance to cheer for Sasha Banks. Who could ask for more? 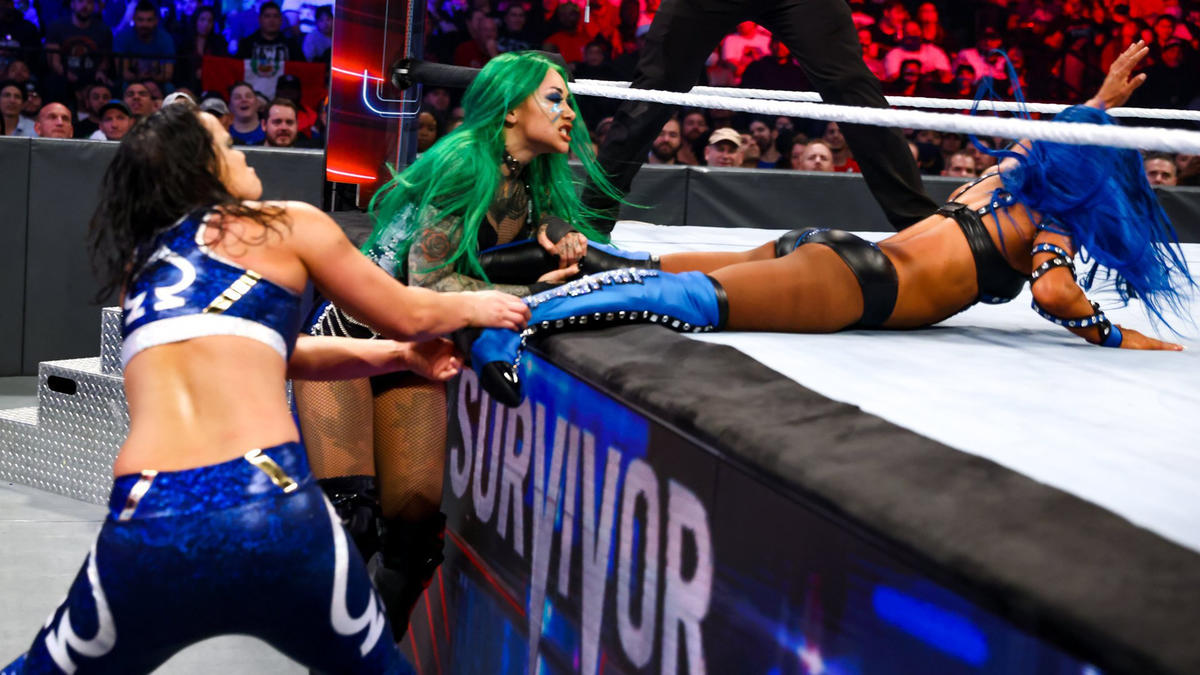 Survivor Series relies on in-fighting to draw out the suspense of matches we definitely know Team Raw is going to win. Throwing in Shotzi’s heel turn, and Sasha’s burgeoning tweener status, and things look a bit more interesting than your average brand vs brand contest. The un-surprisingly lackluster show gave us a few moments of brilliance (KO hits the bricks!) along with the expected issues carrying over between Shotzi and Banks. We got some nice cohesion between Team SmackDown early on, but things began to break down as Baszler tried to grab Banks for a tag.

Shotzi yanked her off the apron and yelled some mean stuff, but even the master of the tank couldn’t keep us from getting a Belair/Banks showdown. Go watch that sequence because it was as good as you think. SmackDown had a 4-1 lead when Shotzi decided to revisit her beef as both women tagged in at the same time, leading to a proper team implosion. Bianca had a great view to watch everyone pull Banks from the ring, leaving her to get counted out and eliminated. No love lost for their captain. The EST got it done with a KOD to Shotzi to become the sole survivor; an embarrassing result for the blue brand, but a great accolade for Belair.

Since they’re both as responsible for SmackDown’s loss as Bianca, I’m sure we’ll get some more throw downs between Sasha and Shotzi this week. Their first match was solid enough to warrant a second time around, and the clash of hair alone makes it giffable. It’ll be interesting to see how they handle Sasha; WWE’s instinct will be to make her the face to help build Shotzi as a baby heel, yet the story’s far more interesting if the Boss stays just as nasty. Banks is fine as the face, but she’s at her best when she’s trying to stab as many people in the back as possible. Give me that clash of mean-on-mean! I want to see two rude-ass ladies compete for who can pull the dirtiest tricks.